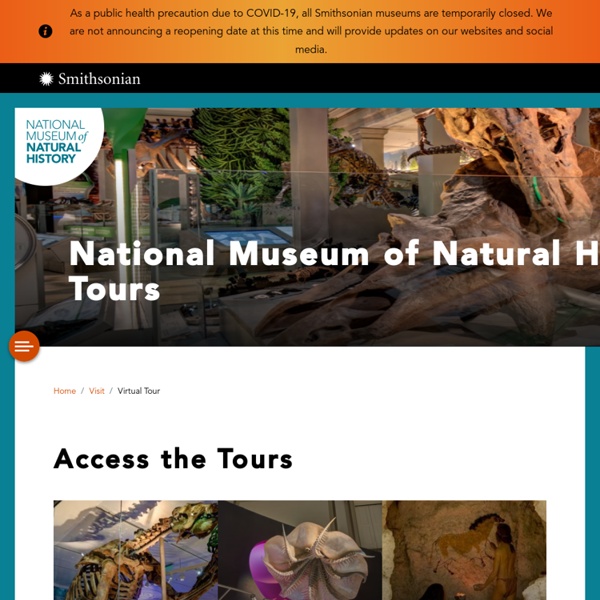 This comprehensive virtual tour allows visitors using a desktop computer (Windows, Mac, Linux) or a mobile device (iPhone, iPad, Android) to take a virtual, self-guided, room-by-room walking tour of the whole museum. You can even browse a list of past exhibits, which is included on the ground floor map (see upper right map buttons). The visitor can navigate from room to room by clicking map locations or by following blue arrow links on the floor that connect the rooms. The desktop version includes camera icons to indicate hotspots where the visitor can get a close-up view of a particular object or exhibit panel. Please note: This tour is provided in Flash and HTML5 / Javascript versions. Flash supports viewing by Desktop (Windows, Mac, Linux). Please note: The National Fossil Hall is currently closed for renovation. Site Credit: Imagery and coding by Loren Ybarrondo.

Astronomy: Sites & Projects Astronomy & Space Return to Mars Join us as we follow NASA’s latest rover, Curiosity. Never Lost: Polynesian Navigation Imagine yourself in the middle of the vast Pacific Ocean. You've been sailing for weeks, and there's no land in sight. Ed Tech Teacher Tool Dashboard We're here to help! Looking for a Place to Begin? Start here! Frameworks & Models Portraits of a Princess While the attention today might be on a certain princess-to-be, I want to share two portraits from 1881 of Princess Savang Vadhana of Siam, First Queen Consort of King Chulalongkorn. She later became known as Her Majesty Queen Savang Vadhana, the Queen Grandmother.Princess Savang Vadhana was born in 1862 as the 27th daughter of King Mongkut, who is best known outside of Thailand as the king in Rodgers and Hammerstein’s The King and I. Her father passed away when she was six, and her half-brother Prince Chulalongkorn was chosen to become king. King Chulalongkorn is generally considered one of the greatest kings of Thailand, as his reign is known for modernizing the country through government and social reforms -- especially the abolition of slavery. When Princess Savang Vadhana was of age, she became one of King Chulalongkorn’s royal consorts.

Ask an Astronomer Below you will find a list of questions that have video answers available. To view a segment, simply select your connection speed after the format you wish to view the answer in. (Windows Media is more common for PC users, and QuickTime is more common for Macintosh users. Google Apps and Chromebooks for Special Education and Special Needs Chromebooks and Google Apps are excellent assistive technology (AT) that help students with special needs access curriculum and information. Google Apps and Extensions in the Chrome Web Store provide many supports to students with learning challenges. Chromebooks allow students to access curriculum while avoiding their triggers. Online curriculum and resources allow them to work without distraction, which lowers anxiety. Chromebooks also allow students to access additional resources to support their learning and address their individual needs.

Teaching Resources and Lesson Plans from the Federal Government FREE Features These features originally appeared on the FREE.ED.gov features blog. The features highlight resources and ideas related to holidays, awareness months, anniversaries and seasonal topics. January Giant Pandas Sign up to get panda news from the Zoo. Giant pandas are black and white bears that live in temperate-zone bamboo forests in central China. Among the best recognized—but rarest—animals in the world, they have come to symbolize endangered species and conservation efforts. As few as 1,600 giant pandas survive in the mountain forests of central China. More than 300 pandas live in zoos and breeding centers around the world; most of these pandas are in China. Giant pandas Mei Xiang and Tian Tian are at the National Zoo under a Giant Panda Cooperative Research and Breeding Agreement, signed in January 2011, between the Zoo and the China Wildlife Conservation Association.

@mrocallaghan_edu image via @gapingvoid Challenge (includes differentiation) Explanation Science Websites for Children Science Websites for Elementary School Students by Mandy Donoghue Elementary school students are fascinated with using technology to text friends sitting right beside them, to listen to or even record music, and play games filled with gripping graphics. These activities are all science related. Children are inquiring, observing, gathering, organizing, and concluding. Granted, the youngsters' focus may not be a scientific topic, but the skills they are acquiring can easily be applied to some of the best science websites for elementary school students.