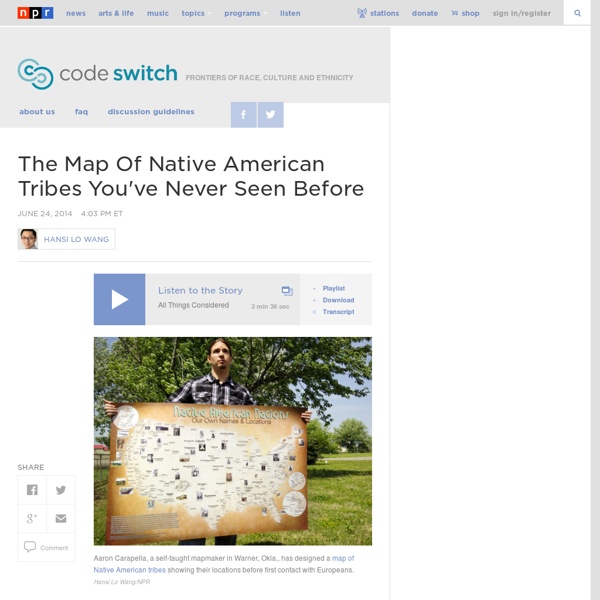 » The Cherokee/Seminole Removal Role Play Zinn Education Project In her book A Century of Dishonor, published in 1881, Helen Hunt Jackson wrote, “There will come a time in the remote future when, to the student of American history [the Cherokee removal] will seem well-nigh incredible.” The events leading up to the infamous Trail of Tears, when U.S. soldiers marched Cherokee Indians at bayonet-point almost a thousand miles from Georgia to Oklahoma, offer a window into the nature of U.S. expansion—in the early 19th century, but also throughout this country’s history. The Cherokees were not the only indigenous people affected by the Indian Removal law and the decade of dispossession that followed. The Seminoles, living in Florida, were another group targeted for resettlement. For years, they had lived side by side with people of African ancestry, most of whom were escaped slaves or descendants of escaped slaves.

The Runner-Up Religions Of America : The Protojournalist Glance at the map above, Second Largest Religious Tradition in Each State 2010, and you will see that Buddhism (orange), Judaism (pink) and Islam (blue) are the runner-up religions across the country. No surprises there. But can you believe that Hindu (dark orange) is the No. 2 tradition in Arizona and Delaware, and that Baha'i (green) ranks second in South Carolina? The map — created by the Association of Statisticians of American Religious Bodies and published recently in The Washington Post — "looks very odd to me," says Hillary Kaell. She is a professor at Concordia University in Montreal who specializes in North American Christianity.

Infinity of Nations: Art and History in the Collections of the National Museum of the American Indian - George Gustav Heye Center, New York Throughout North, Central, and South America, Native nations have often been guided by leaders recognized for their abilities to maintain reciprocal relationships and to coordinate collective efforts through their oratory and judiciousness. The right within a culture to don a headdress such as those shown here depends first on the acquisition of cultural knowledge and second on the ability to use that knowledge for the benefit of the people. These headdresses represent the right of Native peoples to govern and instruct themselves according to their own laws, customs, and prophecies. George Heye’s Legacy: An Unparalleled Collection The objects in this exhibition were largely collected by George Gustav Heye (1874–1957), a New Yorker who quit Wall Street to indulge his passion for American Indian artifacts. Over time, Heye gathered some 800,000 pieces from throughout the Americas, the largest such collection ever compiled by one person.

The Overhill, Valley, Middle, Lower and Out Towns of the Cherokees Cherokee towns were grouped by the British according to the geography and leadership. Traders were assigned to important towns within the groups as shown here. Before there were roads, there were only trails. Native America had developed a network of trails that connected the Hudson Bay all the way to the Gulf of Mexico; the Atlantic to the Pacific. The theft of Native Americans' land, in one animated map American society has a remarkably short memory when it comes to past injustices, which is why there are somehow still people who think that Washington's professional football team should continue to be named after "the scalped head of a Native American, sold, like a pelt, for cash." University of Georgia historian Claudio Saunt is looking to correct that, at least in the case of Europeans' violent seizing of Native Americans' land. To supplement his new book, West of the Revolution: An Uncommon History of 1776, Saunt created an interactive map showing the decline of Indian homelands from 1776 to 1887. Along with Slate's Rebecca Onion, he turned that map into a GIF, showing just how rapidly European-Americans took what amounted to over 1.5 billion acres:

Carlisle Indian Industrial School History Note: I use the term "Indian" throughout this article to identify the peoples of the various autochthonous nations within the U.S. borders, who were affected by and recruited for the Indian School experiment, in keeping with the written accounts of the historic period during the school's existence. Student body assembled on the Carlisle Indian School Grounds. Photo courtesy of Carlisle-www.army.mil

Muslim group protests ad symbol Chicago Tribune 6/30/14 A group of Sufi Muslims took to Chicago’s streets Sunday to say an emblem used by Italian design house Roberto Cavalli smacks of insensitivity and is an affront to their faith. The outrage stems from a logo for the Just Cavalli line that is shaped similarly to a Sufi symbol that represents God and has been revered by the faithful for decades as a sign of love and unity. Cavalli used its logo on ads for its perfumes and clothing, including some found particularly troubling by Sunday’s demonstrators that featured mostly naked models with the logo tattooed on their necks.

Hitler’s Inspiration and Guide: The Native American Holocaust While attending the annual Garifuna Film Festival held here in Los Angeles, we watched films about indigenous cultures, and saw the 1985 Academy Award-winning documentary Broken Rainbow, directed by Victoria Mudd, which discusses the history of injustice towards the Native American people. The film talked about The Long Walk of the Navajo, which was the 1864 deportation and attempted ethnic cleansing of the Navajo people by the U.S. government. 8,000 Navajos were forced to walk more than 300 miles at gunpoint from their ancestral homelands in northeastern Arizona and northwestern New Mexico to an internment camp in Bosque Redondo, which was a desolate tract on the Pecos River in eastern New Mexico. Many died along the way. From 1863 to 1868, the U.S. Military persecuted and imprisoned 9,500 Navajo (the Diné) and 500 Mescalero Apache (the N’de). During the film I learned about something that shook me to my core that I had not heard before.

Why Republicans Cannot Grasp That "Redskins" Is Offensive Update, June 18, 2014: On Wednesday, the US Patent and Trademark Office canceled the Redskins' six federal trademarks. This story first appeared on the TomDispatch website. Every once in a while a small controversy comes along that helps explain a big problem. This National Football League season has provided such a controversy. The name of Washington D.C.'s football team, the Redskins, is under fire.

Quanah Parker Quanah Parker (ca. 1845 or 1852 – February 23, 1911) was Comanche/English-American from the Comanche band Noconis ("wanderers" or "travelers"), and emerged as a dominant figure, particularly after the Comanches' final defeat. He was one of the last Comanche chiefs. The US appointed Quanah principal chief of the entire nation once the people had gathered on the reservation and later introduced general elections. Quanah was a Comanche chief, a leader in the Native American Church, and the last leader of the powerful Quahadi band before they surrendered their battle of the Great Plains and went to a reservation in Indian Territory. He was the son of Comanche chief Peta Nocona and Cynthia Ann Parker, an English-American, who had been kidnapped at the age of nine and assimilated into the tribe. Quanah Parker also led his people on the reservation, where he became a wealthy rancher and influential in Comanche and European American society.

Off the Literary Reservation “What does it mean when you never see yourself in the reading you are provided at school? Does it mean you don’t exist, you don’t count, you are not important?” James Blasingame, a professor at Arizona State University, wonders. He works at the intersection of two genres constantly on the defensive: Native American literature, forever overshadowed by the Little House on the Prairie’s of the world, and young-adult literature, trashed regularly as a non-entity invented to market Twilight. He shrugs off the young-adult literature naysayers. “Scholars, teachers, librarians, people who actually work with young people every day and know what reading can mean in their lives do not question its value.”

Gender Neutral Bathrooms: Solving the Sign Problem by Lisa Wade, PhD, 9 hours ago at 09:00 am “But what would you put on the door?!” said a facility manager at an airport, his concern echoed by an administrator at a university: “When people are looking for a restroom, they look for the ‘man or woman’ icon. It’s what we know to look for that means restroom.” We can’t have gender neutral bathrooms, you see, because there’s no symbol for it… or is there?