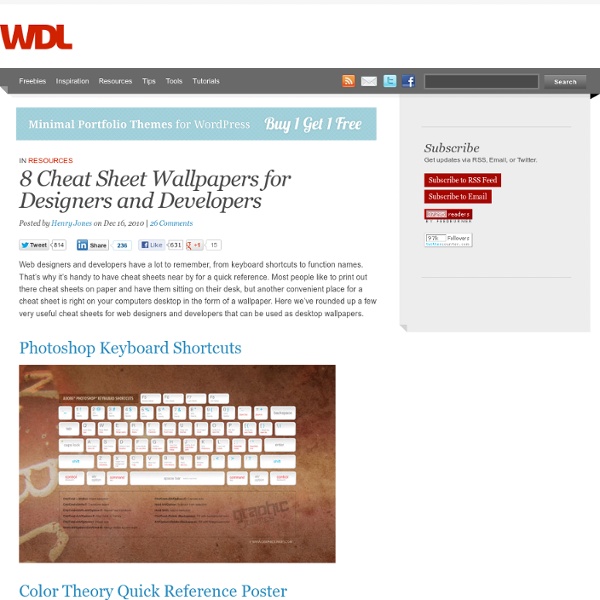 Web designers and developers have a lot to remember, from keyboard shortcuts to function names. That’s why it’s handy to have cheat sheets near by for a quick reference. Most people like to print out there cheat sheets on paper and have them sitting on their desk, but another convenient place for a cheat sheet is right on your computers desktop in the form of a wallpaper. Photoshop Keyboard Shortcuts Color Theory Quick Reference Poster Periodic Table of Typefaces The Anatomy of Type Web Accessibility Checklist TextMate Shortcuts jQuery 1.3 Cheat Sheet WordPress Help Sheet About the Author Henry Jones is a web developer, designer, and entrepreneur with over 14 years of experience. Related Posts 1932 shares 8 Must-have Cheat Sheets for Web Designers and Developers As a web designer or developer, it’s nearly impossible to remember multiple programming languages, frameworks, and keyboard shortcuts to various applications. Read More 2750 shares Photoshop CS6 Cheat Sheet

Developing Streamlined and Efficient CSS Styles CSS can be compared to the sculptor’s tool set when crafting a sculpture. We as web designers utilize all the assets CSS brings forth to create structured layouts for our websites. Over the years this design process has become more organized and fitted. Rules have been put in place for best-practice procedures when coding. We’ll have a look at some ideas you can apply to your stylesheets to help speed up your code in future projects. Throughout the article keep your personal idiosyncrasies in the back of your mind and try to absorb as much information as possible. Why Bother to Streamline CSS? Many web designers get lost in the comparison of frontend to backend languages when talking about parsing code. This means frontend code still has a quantitative load time. This may not be so obvious with much of today’s high-speed connections and advanced Operating Systems. When CSS is coded efficiently you should see elements form and style as they are processed. How to Work with Efficient Code =!

Andrew Pearce - Photographer & Filmmaker Andrew is an art photographer and filmmaker from the Australian countryside. At the age of 24, his photography has exhibited internationally, with several works held in art gallery collections. In 2011, he was awarded The Shutterbug Award, one of Australia's most prestigious awards for emerging photographers. Andrew has made music videos for bands including Eskimo Joe, The Temper Trap and Duran Duran. As well as being nominated for Best Pop video at the MVA's in London. Water Birth Welcome to the Earth Alpine Ponds Endless Afternoons Waiting for the Raging River Water Vine Poison Blackberry The Ages Primitive Waking Eve Truce The Animals Tame Rolling Storms Eulogy Raising Earth Sky Rise Raising Earth Cocoon Orchid Jewel The Conductor

Adobe Creative Suite Toolbar Shortcut Wallpapers [Exclusive] Designers can work hours into the night to produce their best work for clients, their portfolio or their pet projects. To make the process easier, most would use shortcut keys on their regular design and development tools particularly Adobe Photoshop, Illustrator, InDesign and Flash, to expediate the process. You can be sure that they are not going to go back to the traditional (and slower) click-and-search methods. That is why you can find tons of cheatsheets on the Web, designed to help designers and developers make better use of their time – in producing their masterpieces, not looking through the rows and rows of commands for the right action. In light of this, we thought that it would be nice to round up these shortcuts and release them as wallpapers for our designer readers. Here are the wallpapers to four great design arsenals, created exclusively by us, to you: Adobe Photoshop, Adobe Illustrator, Adobe InDesign, and Adobe Flash. Photoshop Illustrator InDesign Flash

The Lost Principles of Design In the instant age that design has evolved into recently many of us often stray away from the basics. If you had a professor in college who taught you the fundamentals of design these may be engrained into your head. For the self-taught, you may have a book on your desk with these very principles. However, the more and more people that flood the internet for design content need to learn the basics before trying to make a stellar gradient in Photoshop. While this is cool and amazing right now, there will come a point where this style is strayed away from and a new style is made. Balance Arranging parts to achieve a state of equilibrium between forces of influences. Examples: Symmetrical, Asymmetrical, Radial Contrast Interaction of contradictory elements. Examples: Large & Small, rough & smooth, thick & thin, light & dark, organic & geometric Emphasis & Subordination Establishing centers of interest which focus the viewer’s attention. Directional Forces Proportion Scale Repetition & Rhythm Balance

15 Useful HTML5 Tutorials and Cheat Sheets | Tutorials 1911 shares 8 Must-have Cheat Sheets for Web Designers and Developers As a web designer or developer, it’s nearly impossible to remember multiple programming languages, frameworks, and keyboard shortcuts to various applications. This is where cheat sheets can be a life saver. Read More 2705 shares Photoshop CS6 Cheat Sheet Photoshop is one of the preferred tools of web designers, and like any other tool that is used over and over, it’s important to optimize one’s workflow by using keyboard shortcuts.

27 Must-Have Starter Kits For Web Designers Starter kits are great timesavers for web designers and they are particularly useful for those who often create mock-ups for project pitching on daily basis. If you are a designer-cum-programmer think of it as your code snippets So what’s in a starter kit? We think it varies – depending on what each designer routinely worked with. In today’s article, we attempt to show you some of the best design starter kit we’ve come to know. GUI, Form Elements and Web Components From form elements like checkboxes, input fields, textareas to web design components like buttons, arrows, icons, badges and more. Yahoo’s Design Stencil Kit Probably one of the most complete kit for designers. Web Form Elements With all these tabs, buttons, dropdowns in one single PSD file, it’s sure going to give you a kick start in interface design. Browser Form Elements PSD Browser Form Elements PSD for Mac Firefox 3 and another for Vista IE7. Flex Dark Skin Sleek dark skin interface elements. Turquoise PSD Vista elements.

Beautiful Typography with InDesign | MAX 2013 – The Creativity Conference Community Translation Your transcript request has been submitted. Adobe TV does its best to accommodate transcript requests. Join the Community Translation Project Thanks for your interest in translating this episode! Please Confirm Your Interest Thanks for your interest in adding translations to this episode! An error occurred while processing your request. Another translator has already started to translate this episode. Thanks for Participating! This episode has been assigned to you and you can expect an e-mail shortly containing all the information you need to get started. About This Episode Learn the top 10 practical tips for achieving consistently beautiful typography using the type feature set of Adobe InDesign.

Anatomy of Type - Typography Deconstructed Ampersand A stylized character of the Latin et used to represent the word and. Definition: The typographic symbol used to designate the word and (& ) is the Latin symbol for et which means and. The name, ampersand , is believed to be derived from the phrase “and per se and.” Aperture The partially enclosed, somewhat rounded negative space in some characters. Apex A point at the top of a character where two strokes meet. Arc of Stem A curved stroke that is continuous with a straight stem. Arm A horizontal or upward, sloping stroke that does not connect to a stroke or stem on one or both ends. Ascender An upward vertical stroke found on the part of lowercase letters that extends above the typeface’s x-height. Ascender Line The invisible line marking the height of ascenders in a font. Ascent Line The invisible line marking the farthest distance between the baseline and the top of the glyph. Axis An imaginary line drawn from top to bottom of a glyph bisecting the upper and lower strokes is the axis.

HTML5 Canvas Cheat Sheet There are cheat sheets for just about anything out there but I couldn't find one for the HTML5 canvas element, so I decided to do something about that, mostly for my own sake but if other people find it useful that's just all the better. The information is pretty much just a copy of what is found in the WHATWG specs, just condensed and hopefully a bit easier to read. There are virtually no explanations, however, and no examples other than some graphics for compositing values and a few other things (the appearance of which is very much inspired by those found in Mozilla's examples). So, it's basically just a listing of the attributes and methods of the canvas element and the 2d drawing context. Choose between a 2 page PDF document or a PNG file. Corrections and comments are welcome!