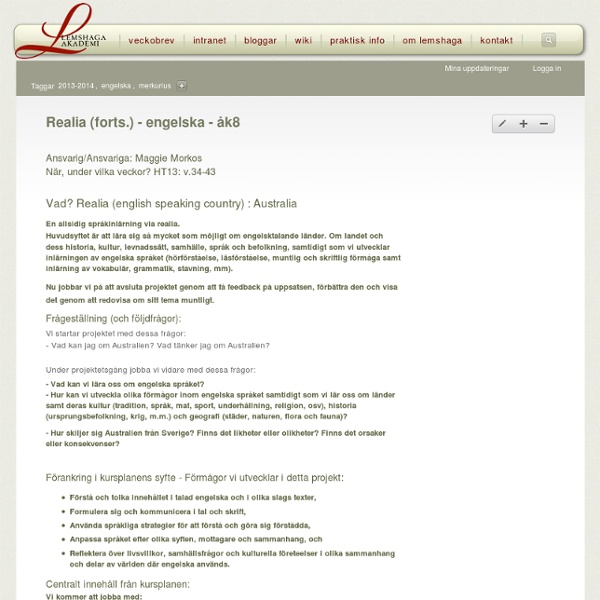 Lesson plans, resources, and ideas for countries in Australia and Oceana. In addition to the printables that can be used for any country study, I make additional sheets for specific countries ~ mapping activities and flag notebooking sheets {and sometimes more!}. We took two weeks to study the continent of Australia. Our first week we focused more on the geography of Australia {Great Barrier Reef, desert, oceans surrounding Australia} as well as the currency, the Australian flag, and learned some Australian slang words {grins}.

First Fleet: 04/02/2014, Behind the News Recently we celebrated Australia day on the 26th of January. But why do we mark it on that day in particular? To answer that question, Sarah will take you back in time to 1788, to meet some kids who came to Australia on the First Fleet. English: what you need to know about the language english, english language, english lingusitics, english as a second language, english as a foreign language, english as the world What are the world's most widely spoken languages?In which countries is English the language spoken by the majority as a first language? Australia Facts for Kids: Facts about Australia for Kids Interesting Facts for Kids Here are some interesting Australia Facts which were chosen and researched by kids especially for kids. Name: Commonwealth of AustraliaGovernment: DemocracyPopulation: 23, 6 million (2013)Capital: Canberra with 380,000 people (2013)Language: English Australia Geography

Ancient Australian History There were eleven ships in the First Fleet. They were all small ships that included two naval ships, six convict ships and three storeships for supplies. The ships were specially built for the long eight month voyage which had to carry prison chambers for the convicts, and also carry food and animals. The animals included sheep, goats, chickens, dogs and cats, that also needed special areas to place them. The School System A child may begin schooling with grade 0 (also called reception, or grade-R) from the age of four. Grades 1 to 9 are compulsory and classified as General Education and Training (GET). Grades 11 and 12, Further Education and Training (FET), are non-compulsory; qualification at this level with a matriculation certificate is required to enter tertiary education. Some schools offer a post-matric/sixth-form level which allows students to sit for A-level exams.

Australia Australia's ecosystem is an unusual one because of its remote location. As a result, there are many animal species that occur here and nowhere else in the world, such as the platypus, kangaroo, echidna, and koala. Australia has 516 national parks to protect its unique plants and animals. One of Australia's most amazing sites rises like an enormous whale's back from a flat red-soil desert called the Red Center. This site is called Uluru, and it is a sacred natural formation at the heart of the country. Rising 1,100 feet (335 meters) tall, it is the largest rock in the world!

People, culture and lifestyle - About Australia - Australian Government Department of Foreign Affairs and Trade Australia is a product of a unique blend of established traditions and new influences. The country’s original inhabitants, the Aboriginal and Torres Strait Islander peoples, are the custodians of one of the world’s oldest continuing cultural traditions. They have been living in Australia for at least 40 000 years and possibly up to 60 000 years. The rest of Australia’s people are migrants or descendants of migrants who have arrived in Australia from about 200 countries since Great Britain established the first European settlement at Sydney Cove in 1788. In 1945, Australia’s population was around 7 million people and was mainly Anglo–Celtic.