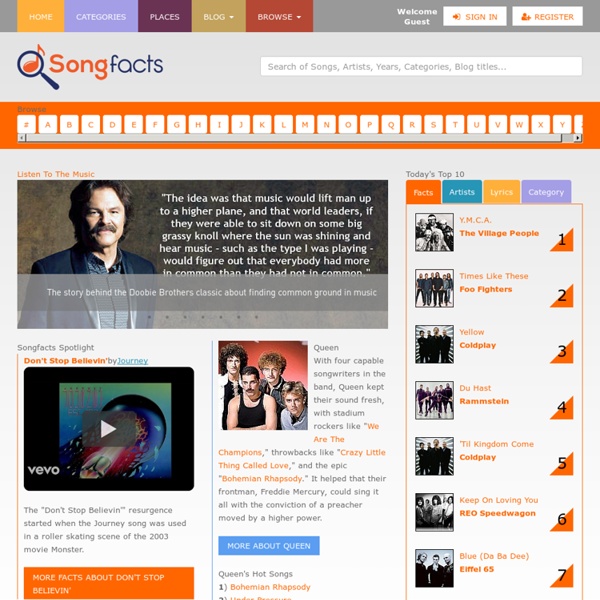 Listen to English and learn English with podcasts in English ►Go to travelogues Follow the pie team on their travels and learn English along the way ►Go to pie plus Our monthly magazine with news, videos, information worksheets and our monthly competition. Song Meanings Kelly Clarkson - Stronger (What Doesn’t Kill You) Song Meaning: The song was written by Jörgen Elofsson, Ali Tamposi, David Gamson in September 2010 at the latter’s studio in Long Beach. The Selfish Giant (Oscar Wilde) - video One of most beautiful and famous fairy tales by Oscar Wild. The story of a grumpy selfish giant and a little boy who teaches him about a happy life and an eternal spring. An inspirational story to make you think about how you are running your life. If you want to see it with subtitles, make sure you activate YouTube subtitles on the video.

The Best Online Karaoke Sites For English Language Learners I’ve used music a lot with English Language Learners. Singing feels much less threatening to many who are learning a new language. Karaoke is a good language-development activity, and there are quite a few karaoke sites on the Internet. I thought it would be a good topic for a short “The Best…” list. Millions of Free eBooks and Audio Books Online Introduction This is the launch page for the pages here at Gizmo's Tech Support Alert that list sites with free ebooks and audiobooks. There are well over a million free ebooks and audiobooks at the sites listed within these pages. There are 3 pages that separate sites on the format of the ebooks, Kindle, ePub and Online Reading. There is a main page for both ebooks and audiobooks that lists all the sites carrying each.

100 Years Of Rock Music In Less Than A Minute Keeping up with the endless spawning of new sub-and sub-sub-genres of music can be hard. Just when you catch up with seapunk and witch house, they’re not cool anymore. Everyone’s already moved on to Nintendocore. To help you brush up on how rock music evolved into the many-tentacled beast that it is today, designer Brittany Klontz created an interactive infographic for ConcertHotels.com that maps 100 years of genres in less than a minute. It not only provides the names and birth dates of each style, but also offers sample songs allowing you to finally know what skiffle sounds like. Best Young Adult Novels, Best Teen Fiction, Top 100 Teen Novels It's almost a cliche at this point to say that teen fiction isn't just for teens anymore. Just last year, the Association of American Publishers ranked Children's/Young Adult books as the single fastest-growing publishing category. Which is why we were only a little surprised to see the tremendous response that came in for this summer's Best-Ever Teen Fiction poll. A whopping 75,220 of you voted for your favorite young adult novels, blasting past the total for last year's science fiction and fantasy poll at, dare we say it, warp speed. And now, the final results are in.

Seven Songs for Teaching Past Simple I have created a list of songs, which are perfect for teaching Past Simple tense in English. All of the songs are relatively new and popular, so they would especially be suitable for teaching teenagers. While the primary goal would be teaching Past Simple, you can always add a few more exercises in order to work on vocabulary or grammar. Coldplay – Paradise Past Simple is often used for retelling the events that happened in the past. Midnight Oil Poster Henry J. Kaiser Auditorium (Oakland, CA) Nov 3, 1988 Authenticity Every item in The Vault is a documented original, unless otherwise noted. We have acquired each item from its original artist, the production company that staged the concert, the photographer that took the photograph or the performer that played the music. In some cases, we have purchased from the secondary market only after carefully verifying authenticity and condition. The vast majority of our collection comes from the archives of Bill Graham Presents, which was carefully managed by BGP from 1966 until our acquisition, and is now managed and preserved by The Vault.

Fairy Tales This website uses cookies. Learn more? Ok, Don't show me this message again Fairy Tales 1001 nights Aesop Meaning of Lyrics From Songs of the 90s These are the meanings behind the song lyrics from various songs of the 90s. In particular, we're looking for songs that aren't immediately obvious. Madonna's "Nothing Really Matters"In this song she reflects on when she was younger (instantly giving her the wisdom of the aged!) and how she was obsessed with herself and what she wanted, never stopping to share love with others. Now she has a child and must care for it, and she realizes that those material things she was so preoccupied with aren't important, and what is important is love and kindness.Mariah Carey's "Butterfly"It seems as though Mariah is singing some mushy love song to a guy.

For ESL English Language Learners Christopher Boone knows all the countries of the world and their capitals and every prime number up to 7,057. He relates well to animals but has little understanding of human emotions. Although gifted with a superbly logical brain, at fifteen, Christopher's carefully constructed world falls apart when he finds his neighbor's dog, Wellington, impaled on a garden fork, and he is initially blamed for the killing. Christopher decides that he will track down the real killer and turns to his favorite fictional character, Sherlock Holmes, for inspiration. The investigation leads him down some unexpected paths and ultimately brings him face to face with a crisis within his own family. A novel that is deeply funny, poignant, and fascinating in its portrayal of a person whose curse and blessing is a mind that perceives the world literally.