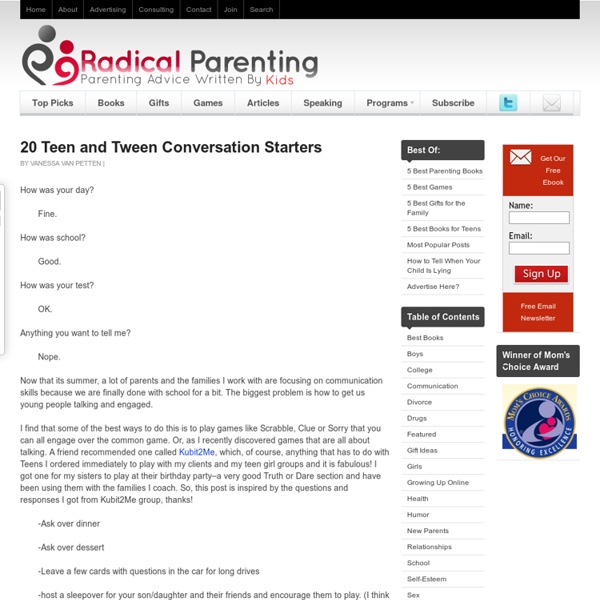 How was your day? Fine. How was school? Good. How was your test? Anything you want to tell me? Nope. Now that its summer, a lot of parents and the families I work with are focusing on communication skills because we are finally done with school for a bit. I find that some of the best ways to do this is to play games like Scrabble, Clue or Sorry that you can all engage over the common game. -Ask over dinner -Ask over dessert -Leave a few cards with questions in the car for long drives -host a sleepover for your son/daughter and their friends and encourage them to play. -Play at a family reunion -Ask your adult friends (I do this with mine all the time–in between Wii games of course) I came up with some and borrowed some from the cards–a few are a little mature, but I find those table topics get the best conversation going! 1. 2. 3. 4. 5. 6. 7. 8. 9. 10. 11. 12. 13. 14. 15. 16. 17. 18. 19. 20. I really love to engage youth in intelligent conversations about values, ideals and goals.

Exercise 'not key to obesity fight' - BBC News Physical activity has little role in tackling obesity - and instead public health messages should squarely focus on unhealthy eating, doctors say. In an editorial in the British Journal of Sports Medicine, three international experts said it was time to "bust the myth" about exercise. They said while activity was a key part of staving off diseases such as diabetes, heart disease and dementia, its impact on obesity was minimal. Instead excess sugar and carbohydrates were key. The experts, including London cardiologist Dr Aseem Malhotra, blamed the food industry for encouraging the belief that exercise could counteract the impact of unhealthy eating. How to Get White Clothes BRIGHT White - Page 2 of 2 - 101 Days of Organization Over time, white clothes can start to get a yellow, grey, or blue tint to them. This can be from body oils, detergents, or be due to all kinds of things. To make your clothes bright white (and beautiful) again, follow the instructions below. Pour some hot water into a plastic, enamel or stainless steel (not aluminum) container.

101 Conversation Starters (Also see How to Start a Conversation) Ice Breakers Where did you grow up?Do you have any pets?Do you have any siblings?Do you know what your your name means? Five ways to survive your daily commute Commuting sucks. It costs up to 14% of your annual salary, increases stress levels and generally saps all energy and goodwill towards humanity. It forces you to witness your fellow wage slaves day in, day out; listen to their music, read their text messages, smell their armpits. Now, according to a recent study, it has been calculated that the daily commute uses up more than 18 months of your life, with an average of 13,870 hours spent getting to and from work – to the place that pays you the money you need in order to get there.

Discussion topics for English language learners TedPower.co.uk Prepare for Discussion A work-scheme for Higher Intermediate & Advanced Level ESL Students 01 Alternative Beliefs 02 Animal Welfare 03 The Arts What Humans Are Really Doing to Our Planet, in 19 Jaw-Dropping Images Last week, Pope Francis and church officials encouraged everyone to consume less and think more about our impact on the environment. It's a timely warning because the next six months will be critical to our future. Ahead of a series of major events later this year, The Foundation for Deep Ecology and the Population Media Center released a collection that illustrates the devastating effects of out-of-control growth and waste, and it's breathtaking. "This is an issue that people care about, and oftentimes it's just not discussed by mainstream media," Missie Thurston, director of marketing and communications at the Population Media Center, told Mic.

Basic Conversation Qs (beg / preint) These worksheets can be used as a speaking activity. Students work in pairs and take turns in asking the questions. It's good if you as a teacher to circulate and monitor their work. At the end, highlight any mistakes that you heard. People Who Are Bilingual Are Smart, Creative And Better Lovers If you thought accents were sexy, imagine how absolutely mind-blowing it would be to have the person of your dreams tell you those three magic words in more than one tongue. There’s just something about people expressing their thoughts in multiple languages that is so appealing. It might be that they’re more in tune with their own thoughts and emotions. Or, perhaps they’re just better communicators in general.

Homemade Zesty Italian Salad Dressing Recipe - Old World Garden Farms Italian salad dressing is hands down the most frequently used condiment in our kitchen. Not only do we use it to top our garden fresh salads, we also use it as a marinade for grilled chicken breasts and as the main flavoring agent in our homemade pasta salad. However, one look at the ingredient label on the store-bought versions can cause anyone to hesitate to purchase. There are so many added preservatives which allow the dressings to have a guaranteed shelf life for several years.

50 random questions - Random Discussion at my house on the far side of shelton. at the risk of sounding conceited, i am learning to love myself. but so far nobody else has deemed it a worthy thing to enter my life and brighten it. no, but i remember as a child reading about a dog who ate a pack of crayons and crapped bundles of multicolored turds all over the lawn of its owner. there is an old weathered sun-faded red leather couch which has faded to the same kind of pink as an old sick cow. i honestly can't remember, it has been so long. no, just fuzzy slippers.

Singularity: Kurzweil on 2045, When Humans, Machines Merge On Feb. 15, 1965, a diffident but self-possessed high school student named Raymond Kurzweil appeared as a guest on a game show called I've Got a Secret. He was introduced by the host, Steve Allen, then he played a short musical composition on a piano. The idea was that Kurzweil was hiding an unusual fact and the panelists — they included a comedian and a former Miss America — had to guess what it was. On the show (see the clip on YouTube), the beauty queen did a good job of grilling Kurzweil, but the comedian got the win: the music was composed by a computer. Kurzweil got $200.

705 FREE Speaking Worksheets Learning to speak a new language is definitely a challenge. It’s very difficult for your students to do if they don’t practice on a regular basis. Luckily, you need to look no further because BusyTeacher.org has the tools to help your students practice their speaking - and want to do it, too! Let’s face it, students aren’t always jumping for joy at the opportunity to speak a language they aren’t 100 percent comfortable with. Students can be hesitant to speak for a wide variety of reasons - fear of mistakes, peer pressure, or lack of self-confidence are some of the main factors. Robots are getting more like us and famous scientists are concerned If 1984’s cautionary tale, The Terminator, is anything to go by, humanity should be wary of any more advances in robotics or artificial intelligence. Elon Musk recently pledged $10 million to keep artificial intelligence from running amok, and physicist Stephen Hawking told the BBC in December: “The development of full artificial intelligence could spell the end of the human race.” Musk and Hawking are backed by other scientists, professors, and security analysts who are worried about the rise of artificial intelligence that doesn’t do what humans ask.

Giving Opinions Four Corners ESL/EFL Speaking Activity - Pre-intermediate - 25 Minutes In this fun class activity, students practice expressing and defending their opinions. The teacher places a different sign (Strongly Agree, Agree, Disagree, and Strongly Disagree) in each corner of the classroom. Then, the teacher reads a statement that requires the students to give an opinion, e.g. Celebrities earn too much money.