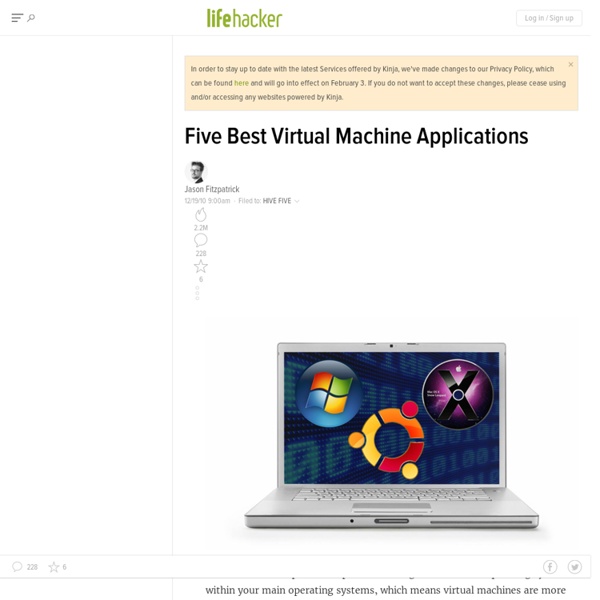 QEMU QEMU (short for "Quick EMUlator") is a free and open-source hosted hypervisor that performs hardware virtualization. QEMU is a hosted virtual machine monitor: It emulates central processing units through dynamic binary translation and provides a set of device models, enabling it to run a variety of unmodified guest operating systems. It also provides an accelerated mode for supporting a mixture of binary translation (for kernel code) and native execution (for user code), in the same fashion as VMware Workstation and VirtualBox do. Licensing[edit] QEMU was written by Fabrice Bellard and is free software and is mainly licensed under GNU General Public License (GPL). Details[edit] QEMU has two operating modes:[3] User-mode emulation Computer emulation Architecture[edit] Features[edit] QEMU can save and restore the state of the virtual machine with all programs running. The virtual machine can interface with many types of physical host hardware. Tiny Code Generator[edit] Accelerator[edit] KVM[edit]

WebBrowserPassView - Recover lost passwords stored in your Web browser See Also Description WebBrowserPassView is a password recovery tool that reveals the passwords stored by the following Web browsers: Internet Explorer (Version 4.0 - 11.0), Mozilla Firefox (All Versions), Google Chrome, Safari, and Opera. This tool can be used to recover your lost/forgotten password of any Website, including popular Web sites, like Facebook, Yahoo, Google, and GMail, as long as the password is stored by your Web Browser. After retrieving your lost passwords, you can save them into text/html/csv/xml file, by using the 'Save Selected Items' option (Ctrl+S). System Requirements And Limitations This utility works on any version of Windows, starting from Windows 2000, and up to Windows 10, including 64-bit systems. Versions History Version 1.86: Added 'Quick Filter' feature (View -> Use Quick Filter or Ctrl+Q). Using WebBrowserPassView WebBrowserPassView doesn't require any installation process or additional DLL files. False Virus/Trojan Warning Command-Line Options License Feedback

Run Android on Your Netbook or Desktop Would you like to try out Google’s Android OS on your netbook or desktop? Here’s how you can run Android from a flash drive and see how fast Android can run on real hardware! Install Android On Your Flash Drive or Memory Card First, make sure you have a flash drive or memory card inserted into your computer with around 256MB or more storage space. Remove any files you may need off of the drive, so you can use it to run Android on your computer. Now you’re ready to download and setup Android on your drive. In the mean time, head over to the UNetbootin site (link below), and download it as well. Once your downloads are complete, run UNetbootin. UNetbootin will now copy the files to your flash drive. Once it’s finished, it will ask if you wish to reboot. If you want to try Android on a computer that has a CD/DVD drive, you could just burn the ISO to a disk and boot from it. Using Android-x86 On Your Computer You’ll see a text prompt for a few moments as Android begins to load. Conclusion Links

LXC LXC (LinuX Containers) is an operating system–level virtualization method for running multiple isolated Linux systems (containers) on a single control host. The Linux kernel comprises cgroups for resource isolation (CPU, memory, block I/O, network, etc.) that does not require starting any virtual machines. Cgroups also provides namespace isolation to completely isolate application's view of the operating environment, including process trees, network, user ids and mounted file systems. Overview[edit] LXC provides operating system-level virtualization not via a virtual machine but rather through a virtual environment that has its own process and network space. Security[edit] Alternatives[edit] LXC is similar to other OS-level virtualization technologies on Linux such as OpenVZ and Linux-VServer, as well as those on other operating systems such as FreeBSD jails, AIX Workload Partitions and Solaris Containers. See also[edit] References[edit] External links[edit]

HTML Help 1.4 SDK Microsoft HTML Help is the standard help system for the Windows platform. Authors can use HTML Help to create online help for a software application or to create content for a multimedia title or Web site. Developers can use the HTML Help API to program a host application or hook up context-sensitive help to an application. As an information delivery system, HTML Help is suited for a wide range of applications, including training guides, interactive books, and electronic newsletters, as well as help for software applications. HTML Help offers some distinct advantages over standard HTML, such as the ability to implement a combined table of contents and index and the use of keywords for advanced hyperlinking capability. HTML Help consists of an online Help Viewer, related help components, and help authoring tools from Microsoft Corporation. Important Please note that the latest version of the HTML Help technology is 1.4, as is the SDK. In the Microsoft HTML Help 1.4 SDK Documentation

User-mode Linux User-mode Linux (UML)[1] enables multiple virtual Linux kernel-based operating systems (known as guests) to run as an application within a normal Linux system (known as the host). As each guest is just a normal application running as a process in user space, this approach provides the user with a way of running multiple virtual Linux machines on a single piece of hardware, offering security and safety[citation needed] without affecting the host environment's configuration or stability. Applications[edit] User-mode Linux is supported by libvirt In UML environments, host and guest kernel versions need not match, so it is entirely possible to test a "bleeding edge" version of Linux in User-mode on a system running a much older kernel. UML also allows kernel debugging to be performed on one machine, where other kernel debugging tools (such as kgdb) require two machines connected with a null modem cable. Integration into the Linux kernel[edit] Comparison with other technologies[edit]

The Usability of Passwords (by @baekdal) #tips Security companies and IT people constantly tells us that we should use complex and difficult passwords. This is bad advice, because you can actually make usable, easy to remember and highly secure passwords. In fact, usable passwords are often far better than complex ones. So let's dive into the world of passwords, and look at what makes a password secure in practical terms. Update: Read the FAQ (updated January 2011) Update - April 21, 2011: This article was "featured" on Security Now, here is my reply! How to hack a password The work involved in hacking passwords is very simple. Asking: Amazingly the most common way to gain access to someone's password is simply to ask for it (often in relation with something else). When is a password secure? You cannot protect against "asking" and "guessing", but you can protect yourself from the other forms of attacks. The measure of security must then be "how many password requests can the automated program make - e.g. per second". Like these: It takes:

VMware ESX VMware ESX is an enterprise-level computer virtualization product offered by VMware, Inc. ESX is a component of VMware's larger offering, VMware Infrastructure, which adds management and reliability services to the core server product. VMware is replacing the original ESX with ESXi.[2] The basic server requires some form of persistent storage (typically an array of hard disk drives) that store the hypervisor and support files. A smaller footprint variant, ESXi, does away with the first requirement by permitting placement of the hypervisor on a dedicated compact storage device. Naming[edit] ESX is apparently derived from "Elastic Sky X",[5] but with rare exceptions[6] this doesn't appear in official VMware material. Technical description[edit] VMware, Inc. refers to the hypervisor used by VMware ESX as "vmkernel". Architecture[edit] The vmkernel itself, which VMware says is a microkernel,[10] has three interfaces to the outside world: hardwareguest systemsservice console (Console OS)

Pixel art scaling algorithms An image scaled with nearest-neighbor scaling (left) and 2×SaI scaling (right). In computer graphics, image scaling is the process of resizing a digital image. Scaling is a non-trivial process that involves a trade-off between efficiency, smoothness and sharpness. With bitmap graphics, as the size of an image is reduced or enlarged, the pixels that form the image become increasingly visible, making the image appear "soft" if pixels are averaged, or jagged if not. With vector graphics the trade-off may be in processing power for re-rendering the image, which may be noticeable as slow re-rendering with still graphics, or slower frame rate and frame skipping in computer animation. Apart from fitting a smaller display area, image size is most commonly decreased (or subsampled or downsampled) in order to produce thumbnails. Scaling methods[edit] An image size can be changed in several ways. Nearest-neighbor interpolation Bilinear interpolation hqx Supersampling Vectorization Mipmap Algorithms[edit]