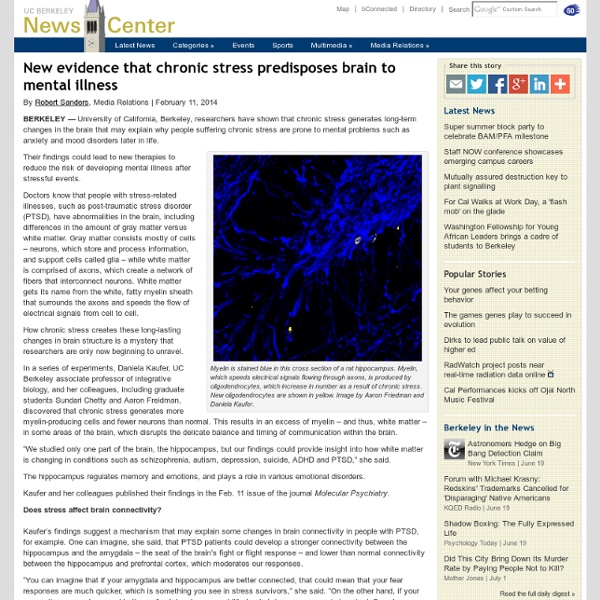 University of California, Berkeley, researchers have shown that chronic stress generates long-term changes in the brain that may explain why people suffering chronic stress are prone to mental problems such as anxiety and mood disorders later in life. Myelin is stained blue in this cross section of a rat hippocampus. Myelin, which speeds electrical signals flowing through axons, is produced by oligodendrocytes, which increase in number as a result of chronic stress. New oligodendrocytes are shown in yellow. Image by Aaron Friedman and Daniela Kaufer. Their findings could lead to new therapies to reduce the risk of developing mental illness after stressful events. Doctors know that people with stress-related illnesses, such as post-traumatic stress disorder (PTSD), have abnormalities in the brain, including differences in the amount of gray matter versus white matter. The hippocampus regulates memory and emotions, and plays a role in various emotional disorders.

Eating green leafy vegetables keeps mental abilities sharp Something as easy as adding more spinach, kale, collards and mustard greens to your diet could help slow cognitive decline, according to new research. The study also examined the nutrients responsible for the effect, linking vitamin K consumption to slower cognitive decline for the first time. "Losing one's memory or cognitive abilities is one of the biggest fears for people as they get older," said Martha Clare Morris, Sc.D., assistant provost for community research at Rush University Medical Center and leader of the research team. "Since declining cognitive ability is central to Alzheimer's disease and dementias, increasing consumption of green leafy vegetables could offer a very simple, affordable and non-invasive way of potentially protecting your brain from Alzheimer's disease and dementia."

Post-Traumatic Stress Disorder (PTSD): Symptoms, Treatment and Self-Help What is post-traumatic stress disorder (PTSD)? Post-traumatic stress disorder (PTSD) can develop following a traumatic event that threatens your safety or makes you feel helpless. Most people associate PTSD with battle-scarred soldiers—and military combat is the most common cause in men—but any overwhelming life experience can trigger PTSD, especially if the event feels unpredictable and uncontrollable. Daily Marijuana Use Doesn’t Really Change Brains of Adults or Teens, Study Finds Last year, the press and marijuana-legalization opponents gave a lot of attention to a study suggesting that daily marijuana causes abnormalities in the brain. New research, reportedly using better techniques, indicates that claim and other reports of cannabis-caused changes to brain structure simply aren't true. The authors of the new study, "Daily Marijuana Use Is Not Associated with Brain Morphometric Measures in Adolescents or Adults," published in the latest edition of the Journal of Neuroscience, suggest that alcohol use was responsible for previous studies finding brain changes. An abstract of the study's findings was published last week on the Journal's website. It describes how scientists could not replicate recent research that claimed the use of cannabis "is associated with volumetric and shape differences in subcortical structures..."

Psychometric Tests : Psychology The Psychology Department has the following tests which may be used only by Psychology staff and students for testing purposes. They are available to be borrowed from Karen Fleet in the Psychology & Philosophy Library which is staffed 9-5 on weekdays during term-time. For more detailed information on which test is appropriate for your study please consult your supervisor or demonstrator.

Enrollment For Phase 3 Trial Evaluating Azeliragon in Treatment of Patients with Mild Alzheimer's Disease Enrollment of the first patients into STEADFAST (Single Trial Evaluating Alzheimer's Disease Following Addition to Symptomatic Therapy), vTv's Phase 3 placebo controlled trial of azeliragon, an oral antagonist of the Receptor for Advanced Glycation Endproducts (RAGE) for treatment of mild Alzheimer's disease has begun. Phase 3 begins following a Phase 2 trial that demonstrated positive results in slowing cognitive decline with 5 mg/day of azeliragon in patients with mild to moderate Alzheimer's Disease. STEADFAST is a randomized, double-blind, placebo-controlled Phase 3 study that is investigating the efficacy of Azeliragon as a potential disease modifying therapy for patients with mild Alzheimer's disease.

Rhetoric - Wikipedia, the free encyclopedia Painting depicting a lecture in a knight academy, painted by Pieter Isaacsz or Reinhold Timm for Rosenborg Castle as part of a series of seven paintings depicting the seven independent arts. This painting illustrates rhetorics. From Ancient Greece to the late 19th century, it was a central part of Western education, filling the need to train public speakers and writers to move audiences to action with arguments.[4] The word is derived from the Greek ῥητορικός (rhētorikós), "oratorical",[5] from ῥήτωρ (rhḗtōr), "public speaker",[6] related to ῥῆμα (rhêma), "that which is said or spoken, word, saying",[7] and ultimately derived from the verb ἐρῶ (erō), "say, speak".[8] Uses of rhetoric[edit] Scope of rhetoric[edit] Scholars have debated the scope of rhetoric since ancient times.

How being called smart can actually make you stupid A few months ago I posted a piece which has become my most popular blog post by quite a landslide. The post covered various techniques for learning and looked at the empirical evidence for and against their efficacy based on recent research. This post is my follow up, in which I look at the case for one tip for learning that it seems really could have a big impact. A growing body of evidence from the last two decades suggests that our attitude towards our own potential for intelligence has a considerable impact on our lives, furthermore we are incredibly vulnerable to having this attitude or "mindset" moulded for better or worse, by how people praise us in a way that is both shocking and problematic. Stanford psychology professor Carol Dweck has presented a range of startlingly fascinating findings on the topic which have been broadly supported by further research. References: