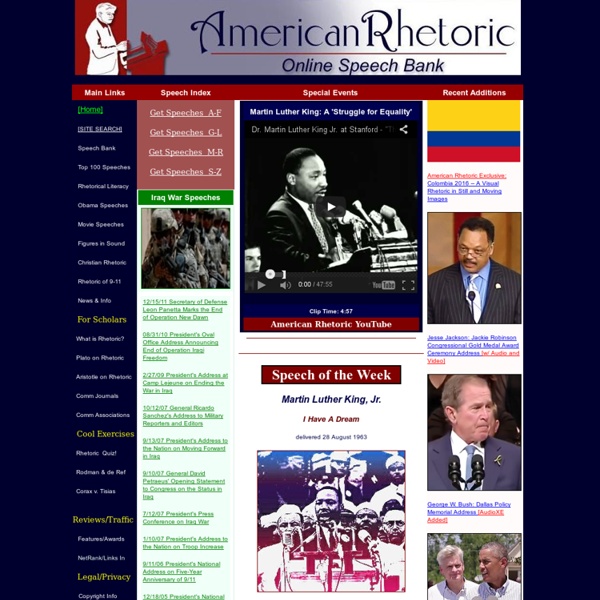 "Five score years ago, a great American, in whose symbolic shadow we stand today, signed the Emancipation Proclamation. This momentous decree came as a great beacon light of hope to millions of Negro slaves who had been seared in the flames of withering injustice. It came as a joyous daybreak to end the long night of their captivity." "But one hundred years later, the Negro still is not free. "When the architects of our republic wrote the magnificent words of the Constitution and the Declaration of Independence, they were signing a promissory note to which every American was to fall heir. "We refuse to believe that the bank of justice is bankrupt. Text and Audio of Address

The Mercury Theatre on the Air WEB SITES FOR POLITICAL SPEECHES Collections of Political Speeches; Audio Sites; Generic Link Sites; Specializd Genre Sites; Individual Presidential Sites; Convention Speaking; Political, Vice President, Debates; Miscellaneous Speech Collections Last Modified: Tuesday, 08-Sep-2009 23:33:43 EDT This I Believe | A public dialogue about belief — one essay at a time Skeptical Inquirer Index Famous Speeches in History - The Speech Archive Browse the Speech Archive A lot of people said a lot of things throughout history. Some of the countless lectures, sermons, talks, discourses, and addresses have been preserved. In other words, No poet or orator has ever existed who thought there was another better than himself. End quote. Image Above Cicero addressing the Senate. The Speech Archive This speech collection is indexed alphabetically by topic, alphabetically by speaker, chronologically, and then some. Terminology Oratory is the art of public speaking. What is the difference between eloquence and rhetoric? The word eloquence stems from the Latin term eloquentia, referring to the readiness, elegance, fluency, and persuasiveness of speech. The word rhetoric is equivalent to the Greek word ritoriki, which in turn stems from the Greek term ritoras, meaning orator. At the end of your oration, you probably want to repeat your message in a nutshell and combine it with a call for action. Outstanding Masters of Rhetoric in History