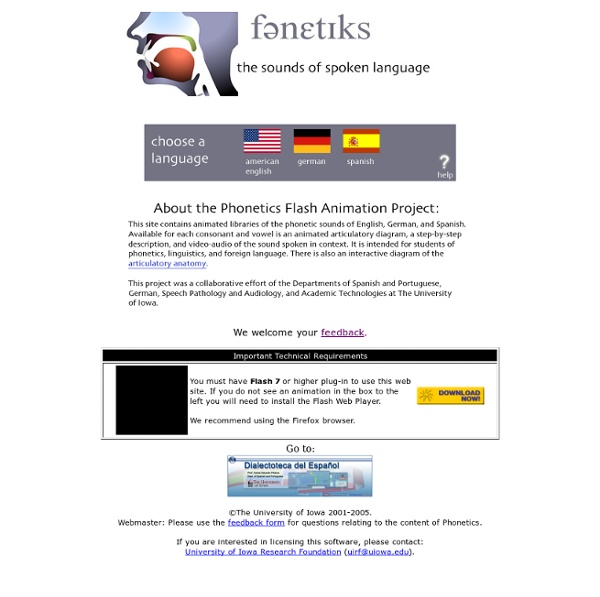 Accent Reduction - Tongue Twisters Tongue Twisters Thank you to Language Success Press for providing these tongue twisters. They're great for accent reduction practice. Language Success Press offers a range of accent reduction systems, including Lose Your Accent in 28 Days and Master the American Accent. 1) Through thick and thin, Sheila and Seth see things through together. Sheila sees Seth as Seth sees Sheila. Seth and Sheila are certain they will be together forever. Click here to listen 2) Essau Wood sawed wood.

How to organize a dictionary of made-up languages Having studied translation, I can accept a Universal Translator as a necessary fictional device, and I am not against its use in fiction, but in reality a Universal Translator would be near-impossible to make. First off, not every semantic unit is shared in every language- on Earth, when a language doesn't have something and notice it, it often borrows the word from another language. So between alien races, if an alien race has no concept of a particular thing, it would not have any linguistic way to express it. Second, the lexicon (total words) of a specific language is huge and constantly evolving. The space necessary to stock all the information of every language, in every variety, for entire species, would be near infinite. Third, a universal translator would have to be able to translate not only the sense of words, but the sense of words grouped in other words.

December 2012 Pronunciation: Teaching a Segmental Contrast by Donna Brinton The above excerpt from comedian Shelley Berman’s classic “Rune Sor-bees” telephone exchange between a hotel guest and a room service clerk serves as a humorous but nonetheless very poignant reminder that comprehension between native and nonnative speakers of English can break down at the word or even syllable level. In fact, one of the fundamental activities when teaching pronunciation to second language learners is the teaching of segmental contrasts, i.e., the difference between two vowel or consonant sounds that are causing difficulties for students, either in terms of their perceiving the difference or in producing it (usually both). These phonemes (or distinctive sound contrasts) may cause difficulties for students for two primary reasons:

Babies understand grammar long before they learn how to speak My experience is that if I come across a new concept (in Russian or Norwegian), I have to deconstruct my own way of saying it, think of the logic while simutaneously not questioning the logic (or lack of), and learn to say it. After time, you accept it. Russian especially, for English speakers. English Pronunciation We use Cisco wireless in all our buildings for convenient and immediate online access. You will need the following for the files below: English Pronunciation/Listening We use the popular Can8 VirtuaLab for all our digital language lab programs. Unit One: TH, as in THINK, BATHROOM, and TEETH. IPA character picker 11 ishida >> apps Character pickers are especially useful for people who don't know a script well, as characters are displayed in ways that aid identification. See the notes for details. Click on characters to create text in the box, then copy & paste to your content. Hide the top of the page.

Baby lab reveals surprisingly early gift of gab From the moment they’re born, babies are highly attuned to communicate and motivated to interact. And they’re great listeners. New research from the University of Notre Dame shows that during the first year of life, when babies spend so much time listening to language, they’re actually tracking word patterns that will support their process of word- learning that occurs between the ages of about 18 months and two years. “Babies are constantly looking for language clues in context and sound,” says Jill Lany, assistant professor of psychology and director of Notre Dame’s baby lab, where she conducts studies on how babies acquire language. “My research suggests that there are some surprising clues in the sound stream that may help babies learn the meanings of words. They can distinguish different kinds of words like nouns and verbs by information in that sound stream.”

Embodied Cognition  Embodied Cognition is a growing research program in cognitive science that emphasizes the formative role the environment plays in the development of cognitive processes. The general theory contends that cognitive processes develop when a tightly coupled system emerges from real-time, goal-directed interactions between organisms and their environment; the nature of these interactions influences the formation and further specifies the nature of the developing cognitive capacities. Since embodied accounts of cognition have been formulated in a variety of different ways in each of the sub-fields comprising cognitive science (that is, developmental psychology, artificial life/robotics, linguistics, and philosophy of mind), a rich interdisciplinary research program continues to emerge. Table of Contents 1.

Generative semantics Generative semantics is the name of a research program within linguistics, initiated by the work of various early students of Noam Chomsky: John R. Ross, Paul Postal, and later James McCawley. George Lakoff was also instrumental in developing and advocating the theory.[1] The approach developed out of transformational generative grammar in the mid-1960s, but stood largely apart from, and in opposition to, work by Noam Chomsky and his later students. This move led to a more abstract framework and lately to the abandonment of the notion of the CFG formal grammar induced deep structure. A number of ideas from later work in generative semantics have been incorporated into cognitive linguistics, Head-Driven Phrase Structure Grammar (HPSG), Construction Grammar, and into mainstream Chomskyan linguistics.[1]

A Brief Guide to Embodied Cognition: Why You Are Not Your Brain Embodied cognition, the idea that the mind is not only connected to the body but that the body influences the mind, is one of the more counter-intuitive ideas in cognitive science. In sharp contrast is dualism, a theory of mind famously put forth by Rene Descartes in the 17th century when he claimed that “there is a great difference between mind and body, inasmuch as body is by nature always divisible, and the mind is entirely indivisible… the mind or soul of man is entirely different from the body.” In the proceeding centuries, the notion of the disembodied mind flourished. From it, western thought developed two basic ideas: reason is disembodied because the mind is disembodied and reason is transcendent and universal.

In the World: Murmurs of Mayan Along with its stunningly accurate calendar and majestic pyramidal architecture, the Mayan civilization deserves recognition for another unique feature: its language. Mayan languages are a rich source of data for linguists aiming to develop a universal theory of language, but like many of the world’s tongues, their speakers are steadily dwindling in number. MIT undergraduate John Berman spent the past summer in a remote village in Mexico studying Chol — a Mayan language spoken in the southern state of Chiapas — in the hopes of capturing some important features of its grammar and vocabulary. Working first with a team of researchers led by Jessica Coon PhD ’10, and later for several weeks on his own, Berman immersed himself in a Chol-speaking community to document and understand some of the language’s unique attributes.