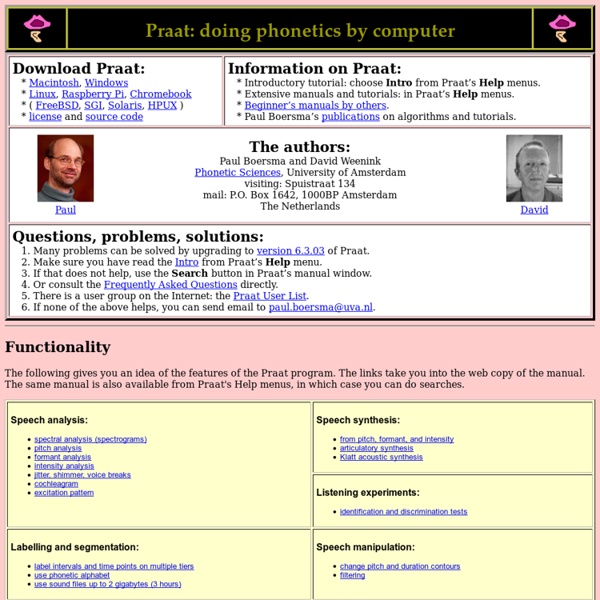 Other Resources - Rachel's English You’ve learned a lot about pronunciation here. Now you need to find good examples of American English on the web to practice listening comprehension, imitation, and to use for Ben Franklin exercises. There are lots of options on the internet, but I have two I like to recommend: ted.com — this site has videos of various lengths on all sorts of topics. There is a good chance you will be able to find some that relate to your field of work or study. Embodied Cognition  Embodied Cognition is a growing research program in cognitive science that emphasizes the formative role the environment plays in the development of cognitive processes. The general theory contends that cognitive processes develop when a tightly coupled system emerges from real-time, goal-directed interactions between organisms and their environment; the nature of these interactions influences the formation and further specifies the nature of the developing cognitive capacities. Since embodied accounts of cognition have been formulated in a variety of different ways in each of the sub-fields comprising cognitive science (that is, developmental psychology, artificial life/robotics, linguistics, and philosophy of mind), a rich interdisciplinary research program continues to emerge. Table of Contents

Critique my Oscillator (C++) kuniklo wrote: mystran wrote:IMHO BLEPs are easier to implement (or even retrofit to a naive oscillator). I couldn't find a good existing BLEP implementation so I began reading the papers and right around the time they started talking about doing cepstrum calculations in Matlab my eyes glazed over and I went back and copied and pasted Paul Kellet's BLIT oscillator into my code and had it working in a few minutes. The original paper was (incorrectly) written with the idea that if you convert your BLEP into minimum phase, you don't need to compensate for the delay.

IPA character picker 11 ishida >> apps Character pickers are especially useful for people who don't know a script well, as characters are displayed in ways that aid identification. See the notes for details. Click on characters to create text in the box, then copy & paste to your content. ReadingKEY Order Page ReadingKEY Testimonials Your program is truly the best I've come across in over 30 years of teaching. It took me about a half a year to convince by colleague but she is a die hard believer now! At conferences and workshops I am always telling my fellow teachers -- you've just 'gotta' try this. Marie Barnett Earle Brown Elementary Brooklyn Center, Minnesota My oldest son placed 1st in his school district 2004 Literary Rally.

How to organize a dictionary of made-up languages Having studied translation, I can accept a Universal Translator as a necessary fictional device, and I am not against its use in fiction, but in reality a Universal Translator would be near-impossible to make. First off, not every semantic unit is shared in every language- on Earth, when a language doesn't have something and notice it, it often borrows the word from another language. So between alien races, if an alien race has no concept of a particular thing, it would not have any linguistic way to express it. Second, the lexicon (total words) of a specific language is huge and constantly evolving. The space necessary to stock all the information of every language, in every variety, for entire species, would be near infinite. If a Computer Were a Chanting Monk: Crazy Live Sounds from Kyma + Gametrak If a computer could throat-sing, meditating on numbers, it might sound something like this. Electro-acoustic composer Jeffrey Stolet is Professor of Music and Director of the Intermedia Music Technology at the University of Oregon, but “sonic shamanism” might apply as well. Mysterious sounds emerge from his laptop as he tugs and pulls on a controller, as if extracting sounds from within.

Arpabet Arpabet is a phonetic transcription code developed by Advanced Research Projects Agency (ARPA) as a part of their Speech Understanding Project (1971–1976). It represents each phoneme of General American English with a distinct sequence of ASCII characters. Arpabet has been used in several speech synthesizers, including Computalker for the S-100 (Altair) system, SAM for the Commodore 64, SAY for the Amiga and TextAssist for the PC and Speakeasy from Intelligent Artefacts (see ST_Robotics) which used the Votrax SC01 speech synthesiser IC. It is also used in the CMU Pronouncing Dictionary.

GRE core word 1000_百度文库 major tests.com How to use Word Focus The 95 Word Focus cards are numbered and color-coded.

It's a fantastic software to show us the word's stress. by bergbrito Nov 21