How to Anonymize Everything You Do Online 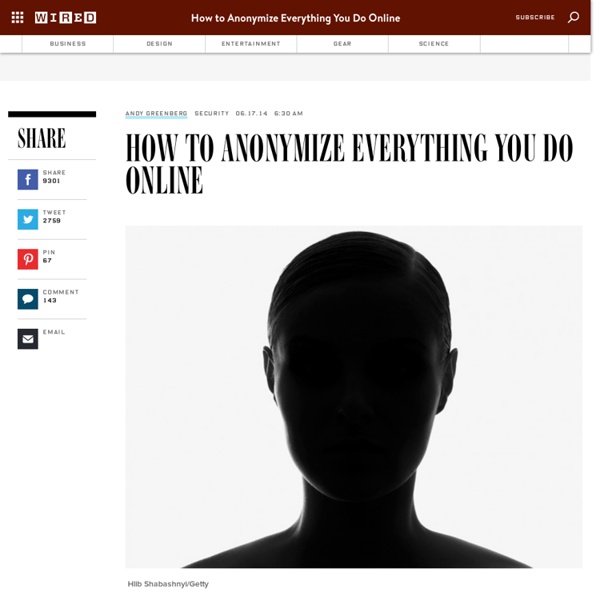 One year after the first revelations of Edward Snowden, cryptography has shifted from an obscure branch of computer science to an almost mainstream notion: It’s possible, user privacy groups and a growing industry of crypto-focused companies tell us, to encrypt everything from emails to IMs to a gif of a motorcycle jumping over a plane. But it’s also possible to go a step closer toward true privacy online. Mere encryption hides the content of messages, but not who’s communicating. Use cryptographic anonymity tools to hide your identity, on the other hand, and network eavesdroppers may not even know where to find your communications, let alone snoop on them. “Hide in the network,” security guru Bruce Schneier made his first tip for evading the NSA. “The less obvious you are, the safer you are.” Though it’s hardly the sole means of achieving online anonymity, the software known as Tor has become the most vouchsafed and developer-friendly method for using the Internet incognito. Email

The Next Big Thing You Missed: A Social Network That Could Truly Reform Our Schools Photo: Getty The federal government has spent 12 years trying to impose reform on primary and secondary schools from above, using things like financial incentives and standardized tests. Edmodo is working from the other direction, hoping to improve our schools from the bottom up. Hashtags Are A Double-Edged Sword I’m just going to come out and say it: hashtags are not ownable. Period. I’ll say it again: you cannot own a hashtag. But guess what brands are constantly doing? They’ve come up with a hashtag to promote their business or product or ongoing campaign. Sound familiar?

15 tips for protecting your privacy online Canada's privacy commissioner released a statement on Dec. 5 saying that web users should always be able to opt out of online tracking used by companies to provide them with targeted advertising. Some web users are "extremely uncomfortable with the notion of their online activities being tracked. People’s choices must be respected," Privacy Commissioner Jennifer Stoddart said in a statement while releasing new guidelines on online behavioural advertising. More and more consumers are using the internet for shopping, banking and other personal transactions, which has only increased the interest of web companies in tracking people's movements. Here is some advice for maintaining your privacy online. Don’t accept free cookies.

Top 10 Android Apps That Turn Your Phone into a Hacking Device 1.SpoofApp SpoofApp is a Caller ID Spoofing, Voice Changing and Call Recording mobile app for your iPhone, BlackBerry and Android phone. It's a decent mobile app to help protect your privacy on the phone. 5 Tools to Boost Your Social Media Productivity « Social Media Examiner Are you overwhelmed with your social media responsibilities? Looking for ways to perform tasks more efficiently? Staying on top of social activities can be challenging, but there are tools that can save you time and make your job a little easier.

White Cube opens a Hong Kong gallery Adding to the burgeoning art scene in Hong Kong is a new gallery from London art powerhouse, White Cube. Collectors and artists swarmed in from all around the region for the opening night of the first exhibition, dedicated to British artists Gilbert & George, whose London Pictures series is also on show in White Cube's three London galleries. Located on Connaught Road, the Hong Kong outpost is White Cube's first overseas venture. It takes over the ground and first floor of a 27-storey tower, by New York-based architect Robert AM Stern. How to (almost) hide your tech gadgets from being tracked The recent leak of documents to the CBC showing that the Canadian Security Establishment Agency used the free Wi-Fi service to track travellers in a major Canadian airport — even after they left the terminal — is the latest example of how valuable location data increasingly is, and how it can be captured without your consent. Here’s how you can minimize your exposure to tracking. Turn off WiFi or Bluetooth on your device

Is This The Crowdfunding Site App Developers Have Been Wishing For? The basic idea behind Bountysource seems easy enough to explain--it’s a crowdfunding site for open source software. But when the site first launched about a decade ago, those were still fairly esoteric concepts for potential users and investors. Even the founders, then fresh out of college, had never heard the term “crowdfounding,” says cofounder and COO David Rappo. The project died fast. "It ran for a few months before we realized this wasn't gonna pay our bills, and we needed to move on and get real jobs,” says Rappo. But about a year and a half ago, Rappo and CEO Warren Konkel decided it was time to focus full time on Bountysource once again.

Facebook’s Plan To Take On Twitter’s Stream Twitter’s real-time stream made it the de facto place to discuss world events. But Facebook’s VP Of Media Partnerships believes his company has two big advantages in the battle to be the digital water cooler: audience size and real identity. It will need a lot more than that to wrestle public discussion away from Twitter, though.

From the Canyon Edge: Fingerprints are Usernames, not Passwords As one of the maintainers of eCryptfs, and a long time Thinkpad owner, I have been asked many times to add support to eCryptfs for Thinkpad's fingerprint readers. I actually captured this as a wishlist bug in Launchpad in August 2008, but upon thinking about it a bit more, I later closed the bug "won't fix" in February 2009, and discussed in a blog post, saying: Hi, thanks so much for the bug report.I've been thinking about this quite a bit lately. I'm going to have to mark this "won't fix" for now. The prevailing opinion from security professionals is that fingerprints are perhaps a good replacement for usernames.

How to make it harder for hackers to assemble your personal information. Photo illustration by Slate. Photos by Thinkstock. It is nearly impossible to participate in modern society without entrusting your most sensitive personal information to countless Internet-based systems. At the same time, even the most well-resourced organizations are being hammered by sophisticated digital attacks, making it difficult to trust that any of these systems will keep our information safe. So the question debated at the highest levels of government, and by dozens of industries, thousands of companies, and millions of consumers, is: How can you keep your personal information secure while continuing to participate in a society powered by the extensive sharing of personal information? However, that’s probably not the question we should be asking.

The Ultra-Simple App That Lets Anyone Encrypt Anything Original illustration: Getty Encryption is hard. When NSA leaker Edward Snowden wanted to communicate with journalist Glenn Greenwald via encrypted email, Greenwald couldn’t figure out the venerable crypto program PGP even after Snowden made a 12-minute tutorial video. Nadim Kobeissi wants to bulldoze that steep learning curve. At the HOPE hacker conference in New York later this month he’ll release a beta version of an all-purpose file encryption program called miniLock, a free and open-source browser plugin designed to let even Luddites encrypt and decrypt files with practically uncrackable cryptographic protection in seconds.