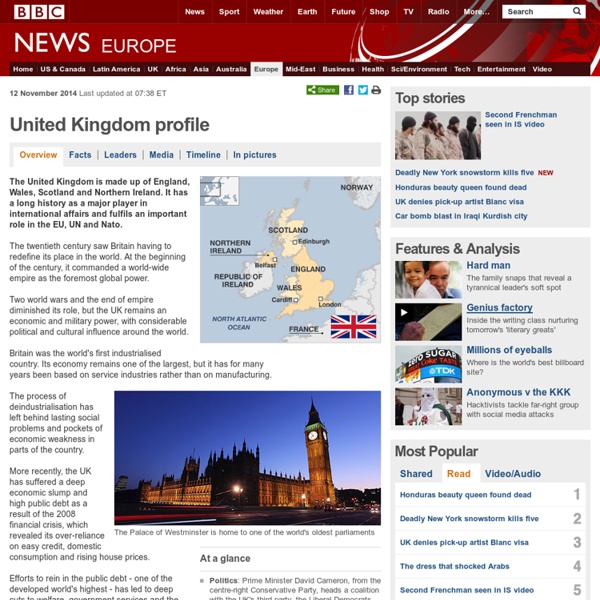 12 November 2014Last updated at 07:38 ET The United Kingdom is made up of England, Wales, Scotland and Northern Ireland. It has a long history as a major player in international affairs and fulfils an important role in the EU, UN and Nato. The twentieth century saw Britain having to redefine its place in the world. Two world wars and the end of empire diminished its role, but the UK remains an economic and military power, with considerable political and cultural influence around the world. Britain was the world's first industrialised country. The Palace of Westminster is home to one of the world's oldest parliaments Continue reading the main story At a glance Politics: Prime Minister David Cameron, from the centre-right Conservative Party, heads a coalition with the UK's third party, the Liberal Democrats. Country profiles compiled by BBC Monitoring Special Report: United Kingdom Direct But this did not stop the centrifugal trend. Diversity There has also been a debate about immigration. Related:  Great Britain

Wales profile - Overview 15 January 2013Last updated at 06:19 ET Wales, a part of the United Kingdom, has retained its distinctive culture and has enjoyed a degree of autonomy since 1999. It includes a heavily industrialised south, a largely-Anglicised and prosperous farming east, and a Welsh-speaking, hill-farming North and West. Wales' devolved government - home rule - is now acquiring more powers and its economy is refocusing on light industry, tourism and financial services, but a small population and poor transport infrastructure continue to make development uneven. Welsh identity and the Welsh language have received a boost from an enlivened popular culture scene in the 1990s, and from the devolution of power from the central government in London to the Welsh National Assembly in Cardiff. Rugby is a national passion Continue reading the main story At a glance Country profiles compiled by BBC Monitoring Wales is a large peninsula in western Britain, divided from England by major rivers and mountain ranges.

British Life and Culture in the UK - Woodlands Junior School England profile - Overview 13 December 2012Last updated at 11:48 ET England is the largest constituent part of the United Kingdom, and accounts for 83 per cent of its population and most of its economic activity. Issues affecting the United Kingdom as a whole therefore also apply to England in particular, especially in the case of identity politics. England's continuing contribution to world civilisation is significant, ranging from language to sport, music and law. The various kingdoms set up by Germanic settlers in the 5th-6th centuries were finally united into the Kingdom of England between 927 and 954. The Norman Conquest of 1066 brought in a new ruling class from northern France and heavily influenced the language, culture and European orientation of the country. Oxford University is England's oldest university Continue reading the main story Politics: England has no governmental institutions separate from those of the UK. Country profiles compiled by BBC Monitoring Identity Culture Law

Let's talk about the UK (still with Scotland) At the beginning of the new school year teachers usually explain to their students what they are going to study. Sometimes efl teachers not only teach grammar but also British culture, so one of the first cultural topics they discuss with their students are the geography of the UK and its form of government. Here you can find an interactive mindmap, a digital poster and a collection of useful websites, just to simplify the work. Click on the Glogster digital poster below, you will find general information about the United Kingdom and some videos. Now take a look at my Cacoo mindmap below about the UK form of government. You can also click on the following link to enlarge the above image: Last September, 18th Scottish people voted for Scotland independence. Scottish referendum explained for non-Brits If you want more general information about the Uk government, the Queen and the Royal Family, open my Blendspace lesson.

North Ireland profile - Overview 17 January 2013Last updated at 11:40 ET Northern Ireland, a part of the United Kingdom, is emerging from a period of conflict known as "the Troubles" and is attempting to implement an historic peace deal. Security has returned - though not without occasional reminders of the bad old days - and Northern Ireland has begun to reap the economic and social benefits. But divisions persist, finding physical form in the barriers that separate some communities. Preferences in schooling, sport and culture often follow ethnic and religious fault lines. Northern Ireland is made up of six counties and forms part of the province of Ulster. Giant murals became one of the main symbols of Northern Ireland's divisions Continue reading the main story Politics: Efforts to overcome the long conflict between pro-UK Unionists and pro-Ireland Nationalists has led to a devolved power-sharing government involving both sides. Profiles compiled by BBC Monitoring Religious and cultural traditions meld with politics.

Scotland Scotland is a country in Great Britain, to the north of England. Scotland has nearly 800 islands, but people only live on some of them. Scotland is a very beautiful country with many mountains, forests, beaches, rivers and lochs (the Scots word for lakes). In the north of Scotland it is light until 11.30 p.m. in summer and in winter you can sometimes see the Northern Lights, or Aurora Borealis, which are spectacular lights in the sky. Energy from the sun turns the Earth’s sky green, red and other colours. Scotland has its own parliament which makes laws for Scottish people. Language There are three languages in Scotland. Scotland is ane o the fower kintras that maks the Unitit Kinrick. A minority (around one percent of the Scottish population) speak Scottish Gaelic, an old Celtic language which is very different from English. Music At public and cultural events you can often hear traditional music and see traditional dancing. Sport Food Symbols

Four Nations Nick: This is London and behind me are the Houses of Parliament. Parts of these buildings are more than nine hundred years old. This is where the laws of the UK are debated and created. The United Kingdom is actually made up of four different countries: England, Scotland, Wales and Northern Ireland. The population of England is around fifty million people. But what are we really like? Priest: The English are a tolerant people. Woman 1 : They’re just enchanting. Woman 2 : The English people are very nice. Woman 3 : They’re so polite and so friendly. Nick: Scotland is in the north of Britain. It’s been part of the UK since 1707. Scotland has some unique customs: wearing tartan kilts … playing the bagpipes … and tossing the caber, a very large post. For over sixty years, the Edinburgh Festival has celebrated art, theatre and culture. Wales is on the western edge of Britain. It also used to be a separate country but has been part of the UK for over four hundred years.