Uri Alon: Why truly innovative science demands a leap into the unknown 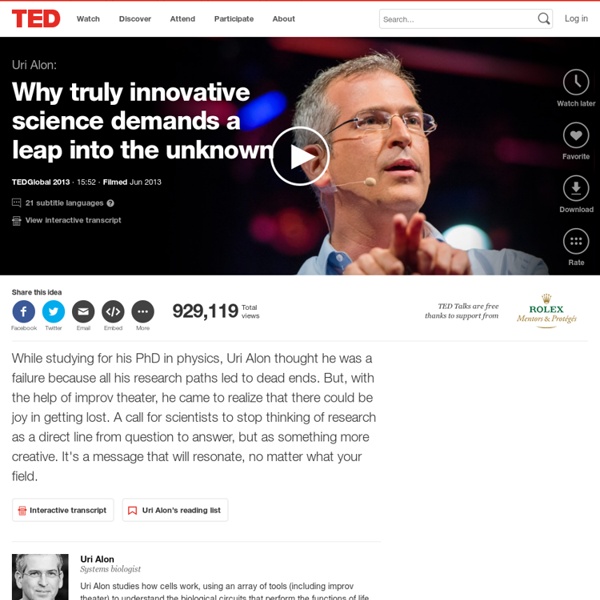 Refining Your Topic Return to Main PageReturn to Starting to Write Information Power/Refining Your Topic* The refining or narrowing process begins as soon as you select a topic. It will continue until the last draft is written. STEP ONE) Make sure it is something worth doing. STEP TWO) Write something down. STEP THREE) Focus, focus, focus. a) WHO: people or interest groups involved - teenagers - Dominicans b) WHAT: a particular component of the subject - prevention - diagnosis or treatment c) WHEN: a specific time period - within the past 5 years - during the turn of the previous century d) WHERE: a geographic area or location - rural New York State - college campuses e) WHY: its relation to other things - criminal or legal aspects - medical aspects STEP FOUR) Think of questions that you would want your research to address. STEP FIVE ) Consider the whole project. STEP SIX) Stay true to your focus as you continue to refine your topic. *John Henderson, Ithaca College L

Pterosaurs Were Super-Social Flying Reptiles A tragedy that claimed the lives of hundreds of pterosaurs 120 million years ago is now providing a slice of prehistoric life, revealing that these dinosaur-era flying reptiles were extremely social creatures. Discovery of the disaster site, described in the latest issue of the journal Current Biology, includes the first known 3-D pterosaur eggs, thousands of fossilized pterosaur bones, and nearly fully intact pterosaur skulls of both males and females. The remains represent a new pterosaur genus and species: the formidable-looking Hamipterus tianshanensis. 10 Unbelievable Dinos That Really Existed Sediments at the site strongly suggest that a huge colony of these large flying reptiles bit the dust during a violent storm. Beforehand, young and old alike were enjoying life next to what was then a peaceful, scenic lake. Pterosaurs therefore definitely were not solo, or lonesome. CSI Fossils: Ancient Killers Caught in the Act

The Most Effective Factor in Education Recognising research problems Research Skills required by PhD students A1: The ability to recognise and validate problems Check this skill By the time students complete a PhD, they should be able to answer ‘Yes’ to most of these questions. Can you identify the research questions addressed in the research papers that you read? Evidence of this skill These are examples of documents you can collect. The research question component of your probation assessmentNotes from a discussion on gaps in the literatureWritten analysis of problems addressed in the literature (for example, in a selection of studies) with a description of how the problems were addressed, and a discussion of the benefits and limitations of those approaches. This page is based upon material produced by The Open University’s research school to support doctoral students. Settling on a research question isn't as easy as it sounds. question

Social Theories: Public Health. Boston University Public health is a multi-disciplinary field that aims to 1) prevent disease and death, 2) promote a better quality of life, and 3) create environmental conditions in which people can be healthy by intervening at the institutional, community, and societal level. Whether public health practitioners can achieve this mission depends upon their ability to accurately identify and define public health problems, assess the fundamental causes of these problems, determine populations most at-risk, develop and implement theory- and evidence-based interventions, and evaluate and refine those interventions to ensure that they are achieving their desired outcomes without unwanted negative consequences. To be effective in these endeavors, public health practitioners must know how to apply the basic principles, theories, research findings, and methods of the social and behavioral sciences to inform their efforts. This module will provide an overview of some of the theories you will learn in SB721.

Robot To Hitchhike Across Canada Alone Starting next month, a robot named hitchBOT will attempt to hitchhike across Canada. Using speech recognition, speech processing, and social media, it will try to charm its way from one coast to the other. Its journey will commence on July 27th, 2014 at the Institute for Applied Creativity at the Nova Scotia College of Art and Design (NSCAD). From there it will venture across Canada until it — hopefully — reaches Vancouver, British Columbia. Say Hello To My Little (Robot) Friend "Usually, we are concerned whether we can trust robots… but this project takes it the other way around and asks: can robots trust human beings?" Other than its one hitchhiking arm, the device won't be capable of moving on its own. But hitchBOT won't be completely helpless. Tumbleweed Robot Rolls Across Desert The bot will also be somewhat self-preservational; hitchBOT will ask drivers to plug it into their car's cigarette lighter to charge its battery.

How to choose a thesis topic | The Three Month Thesis One of the most common questions I get asked is how to choose a thesis topic. It can be a frustrating problem finalising your research ideas. You have to commit to something, but how do you know you’re setting out on the right track? In this post, first I’ll explain what makes a good research topic, then how to choose a thesis topic and how to do the right things early to avoid problems later. Thinking about the end result, your examiners will be looking for research which is; novel (original)set in the context of the existing research in the field, andcompetently executed When choosing a thesis topic, it makes sense to use these criteria to help you. Novelty It’s incredibly hard to come up with a completely new idea. There are three approaches to novelty. The second approach is to pick a specific subject you want to study, and identify a question or problem that hasn’t been addressed before in that niche. The third is to apply a new methodology. Context This is because Competence 1. 2. 3.