Tesla: All Our Patent Are Belong To You 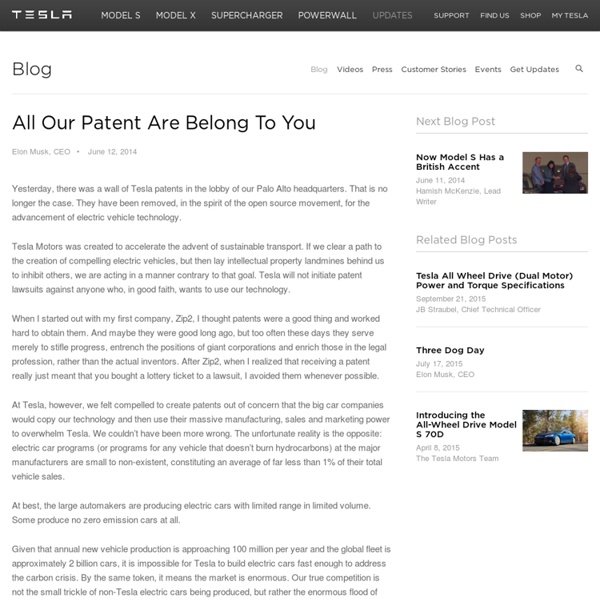 Yesterday, there was a wall of Tesla patents in the lobby of our Palo Alto headquarters. That is no longer the case. They have been removed, in the spirit of the open source movement, for the advancement of electric vehicle technology. Tesla Motors was created to accelerate the advent of sustainable transport. If we clear a path to the creation of compelling electric vehicles, but then lay intellectual property landmines behind us to inhibit others, we are acting in a manner contrary to that goal. When I started out with my first company, Zip2, I thought patents were a good thing and worked hard to obtain them. At Tesla, however, we felt compelled to create patents out of concern that the big car companies would copy our technology and then use their massive manufacturing, sales and marketing power to overwhelm Tesla. At best, the large automakers are producing electric cars with limited range in limited volume.

Enclosure Decaying hedges mark the lines of the straight field boundaries created by the 1768 Parliamentary Act of Enclosure of Boldron Moor, County Durham. In English social and economic history, enclosure or inclosure[1] is the process which ends traditional rights such as mowing meadows for hay, or grazing livestock on common land formerly held in the open field system. Once enclosed, these uses of the land become restricted to the owner, and it ceases to be land for commons. In England and Wales the term is also used for the process that ended the ancient system of arable farming in open fields. Under enclosure, such land is fenced (enclosed) and deeded or entitled to one or more owners. The process of enclosure began to be a widespread feature of the English agricultural landscape during the 16th century. Enclosure could be accomplished by buying the ground rights and all common rights to accomplish exclusive rights of use, which increased the value of the land. W. Early History[edit]

Intellectual Property, Dissemination of Innovation and Sustainable Development | Global Policy Journal - Practitioner, Academic, Global Governance, International Law, Economics, Security, Institutions, Comment & Opinion, Media, Events, Journal We live in a knowledge economy. The production and dissemination of knowledge will be central to solving the problems of climate change and environmental sustainability, reducing global poverty and addressing other global problems. This article asks: do intellectual property rights – with their increasingly global reach –further or hinder the production and dissemination of knowledge? Experience with genetically modified organisms shows that a model markedly different from the current one is more likely to bring wider social benefits, both in the short and the long run. Indeed, the current system may impede both innovation and dissemination. There are reforms in the intellectual property regime, and more broadly in the way we finance, organize and incentivize innovation, that would increase the pace of innovation and its utilization. Policy Implications

System & Boundaries A schematic representation of a closed system and its boundary Every system is delineated by its spatial and temporal boundaries, surrounded and influenced by its environment, described by its structure and purpose and expressed in its functioning. Fields that study the general properties of systems include systems science, systems theory, systems engineering, cybernetics, dynamical systems, thermodynamics, complex systems and system analysis and design. They investigate the abstract properties of systems' matter and organization, looking for concepts and principles that are independent of domain, substance, type, or temporal scale.[citation needed] Some systems share common characteristics, including:[citation needed] The term system may also refer to a set of rules that governs structure and/or behavior. Etymology[edit] The term is from the Latin word systēma, in turn from Greek σύστημα systēma, "whole compounded of several parts or members, system", literary "composition"[2] History[edit]

Can Nature Be Monetized? A Capital Institute Conversation | Capital Institute Many members of the Capital Institute community believe that the emerging markets for ecosystem services hold considerable promise as tools for redirecting the flow of capital toward economic activities that honor ecosystem constraints. However, a paper that recently circulated among us entitled "The Environmentality of 'Earth Incorporated'" raised some questions that challenge that belief. The author, Sian Sullivan, argues that the “intrinsic fallacy at the heart” of ecosystem services market initiatives is that they attempt to incentivize environmentally ethical behavior. She maintains that the market does not produce “virtuous behavior” and that it is essentially naïve to take the view that if only we design them correctly we can halt or reverse ecosystem degradation. Is it an either or proposition? Below a number of thought leaders of the Capital Institute community engage in a free-ranging discussion of these topics. TEEB was also faced with this tension and its attendant risks.

What’s Wrong with Putting a Price on Nature? by Richard Conniff: Yale Environment 360 18 Oct 2012: Analysis by richard conniff Ecosystem services is not exactly a phrase to stir the human imagination. But over the past few years, it has managed to dazzle both diehard conservationists and bottom-line business types as the best answer to global environmental decline. For proponents, the logic is straightforward: Old-style protection of nature for its own sake has badly failed to stop the destruction of habitats and the dwindling of species. But the rising tide of enthusiasm for PES (or payment for ecosystem services) is now also eliciting alarm and criticism. Skeptics say they’re making constructive criticisms of what they see as blind faith in new financial markets. government’s own expert panel also found that it had “greatly undervalued” what it was proposing to sell.) Not all critics reject the PES idea outright. The first mistake, says Kent H. Writing in Conservation Biology, Redford and co-author William M. fire, drought, disease, or flood. Stuart H. MORE FROM YALE e360

The environmentality of ‘Earth Incorporated’ | Sian Sullivan The environmentality of ‘Earth Incorporated’: on contemporary primitive accumulation and the financialisation of environmental conservation Paper presented at the conference An Environmental History of Neoliberalism, Lund University, 6-8 May 2010. Download paper In the latest James Bond film, Quantum of Solace, the villainous business tycoon Domenic Greene, makes a moving (and familiar) speech to potential company sponsors at a spectacularly glamorous, environmental fund-raising gala in Bolivia. We are in a spiral of environmental decline. Meanwhile, Greene is creating immense environmental and social upheaval: investing in oil pipelines and profits in various localities globally; creating a scarce resource of Bolivian water by diverting it into huge hidden dams, thereby increasing dependence on private provision which he of course owns; and managing a tight cabal of self-serving global élites intent on resource capture on a massive scale. vironmentalism, leaving it weaker and depleted’.