6 Reasons Why Social Media is a Powerful Marketing Channel 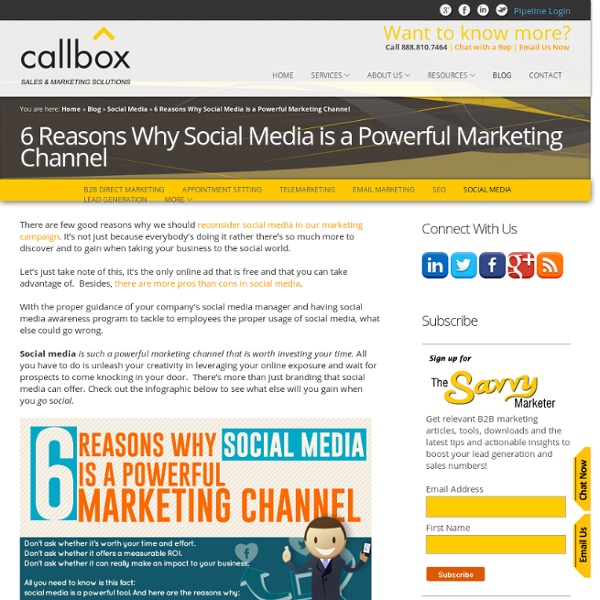 There are few good reasons why we should reconsider social media in our marketing campaign. It’s not just because everybody’s doing it rather there’s so much more to discover and to gain when taking your business to the social world. Let’s just take note of this, it’s the only online ad that is free and that you can take advantage of. Besides, there are more pros than cons in social media. With the proper guidance of your company’s social media manager and having social media awareness program to tackle to employees the proper usage of social media, what else could go wrong. Social media is such a powerful marketing channel that is worth investing your time. Related:  Social Media,

Sales and Marketing - Community Is your Lead Generation Effective? Answer these 5 questions to find o… How to Stop a Conversation From Going in Circles Have you ever sat in a meeting and listened while the conversation went around and around in circles? It’s a frustrating experience—and one that sometimes leads to the faulty conclusion that discussion is a hindrance to action. Talking is actually critically important to good decision-making in organizations, but you have to do it right. Here’s why discussions get “stuck”—and what you can do about it. What’s Really Going on Here? Conversations often go in circles when everyone is advocating their own opinion. To do that, you have to understand a little about how our minds work. Let’s walk this back to the beginning: Every day, we are bombarded with information—sights, sounds, smells, words, colors, and more are all around us, and we unconsciously pick and choose what to take in, while filtering out everything we find unimportant. Courtesy of Peter Senge, "The Fifth Discipline" What Can You Do About It? According to Dr. “We haven’t tried this before—you don’t know what they’re going to do!”

B2B Lead Generation Services, Telemarketing | Callbox Why Social Media is no longer a Hype The needs of the netizens have evolved through time. It’s not just about treating Google as the number resource station but treating social media as an important component of life. It’s becoming a life’s requirement and funny that humans prioritized this kind of technology over their ‘real’ needs. Social media had greatly affected our way of thinking and flooded the world with new born narcissists. Here’s Do Eskimos Tweet? Can your tweets actually reach Alaska? The idea of social media becoming “out of fashion” anytime in the future is just unthinkable. That can sometimes leave you wondering how other countries are taking a bite of this enormous power. Cultures may differ, but when it comes right down to being social animals, everyone has the same blood running though their thought-sharing, people-stalking and attention-seeking veins. Facebook: King of the hill “Bosnia. Twitter is still strong despite the numbers, even (and especially) in China The gang’s all here It’s no longer just a fad.

Silver Web: Redesigning the Business Landscape It is not beyond our awareness how the web has created massive breakthroughs to alter our lives. It has sustained diverse schemes which soon fueled more innovation. Twenty-five years ago, Tim Bernes-Lee has realized the potential of linking millions of computers to what we call now as the internet. The Web allowed businesses across different fields to systematize manual operations to adhere its processes with streamline functions. Traditional Businesses In the physical domain, there are businesses that are unable to directly sell their products to consumers or other businesses, such as in the case of B2B firms. E-Businesses One great impact of the web is the establishment of E-business. Choice freedom – E-businessmen can offers a diverse options to their customers because the web has unlimited information of products of different brands. Corporate Benefits The internet allowed companies to have a better method of lowering their spending and savings capital in their operations.

In Case You Missed It: Google Chairman Says “Mobile Has Won” Google Executive Chairman Eric Schmidt was recently asked for his predictions for 2014 in an interview with Bloomberg. As the leader of most influential web giant, he surely has the credible foresight, and one of those declarations is that “Mobile has won”. What does that mean? He was making a prediction on the business aspect. According to MarketingLand.com: “This 2014, we’ll probably see US smartphone penetration hit 75 percent (from 65 percent today). “That doesn’t mean all smartphone-consumer behavior will be uniform but it does mean that for a significant percentage of smartphone (and tablet owners) these devices will be primary and the PC secondary”. Mobile lead generation The era of mobile usage should also usher in a major revolution in the B2B lead generation and online marketing world. In the last two years, data have consistently shown that buyers (both consumers and business) are making purchases on mobile devices such as tablets and smartphones.

Taking The Lead In Your Lead Generation Campaigns | Leads Generation Marketing A lead generation campaign is just that, a campaign. According to Merriam-Webster’s online dictionary, a campaign is “a connected series of operations designed to bring about a particular result”. If you want a reliable lead generation campaign that is productive and always yields quality b2b sales leads, then you have to take a more active approach towards your campaign. There is definitely a significant benefit to employing active marketing methods for lead generation compared to simply relying on online marketing strategies like search engine optimization (SEO) and content creation where you mostly wait passively for your leads to discover you. You have to remember that in this day and age, information regarding products and services are so much easier to acquire and there are literally millions of sources on the internet willing to provide this information to your prospects.

The Three Most Common Pitfalls Entrepreneurs Face I'm happy to see you around. You may want to subscribe to my blog. Thanks for visiting! There are many entrepreneurs in the world. Some are super successful while most entrepreneurs are trying to find their way. The need to be perfect. Do any of those pitfalls apply to you?