The Best Websites to Learn How to Write Code 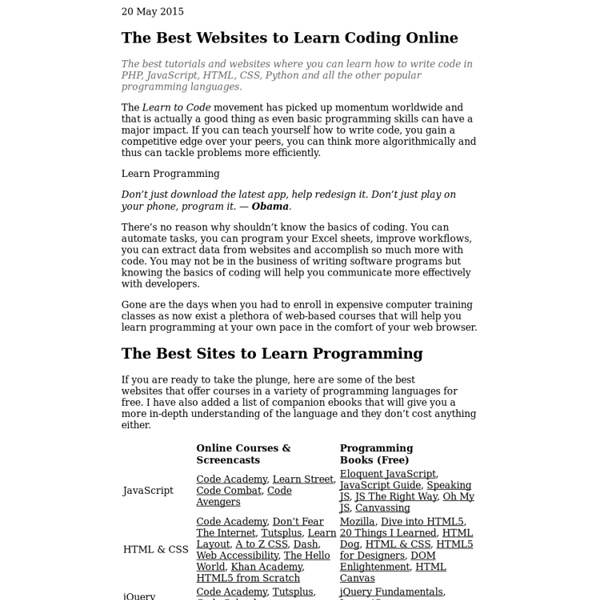 The best tutorials and websites where you can learn how to write code in PHP, JavaScript, HTML, CSS, Python and all the other popular programming languages. The Learn to Code movement has picked up momentum worldwide and that is actually a good thing as even basic programming skills can have a major impact. If you can teach yourself how to write code, you gain a competitive edge over your peers, you can think more algorithmically and thus can tackle problems more efficiently. Don’t just download the latest app, help redesign it. Don’t just play on your phone, program it. — Obama. There’s no reason why shouldn’t know the basics of coding. Gone are the days when you had to enroll in expensive computer training classes as now exist a plethora of web-based courses that will help you learn programming at your own pace in the comfort of your web browser. If you are ready to take the plunge, here are some of the best websites that offer courses in a variety of programming languages for free.

Meet Darth Pai, the Sith Lord who’s taken over the Federal Communication Commission. “I find your lack of faith in deregulation disturbing.” — Darth Pai A few weeks ago, in a galaxy not so far away, Tom Wheeler stepped down as the chairman of the Federal Communications Commission. In his three years at the helm of the FCC, he proved to be a champion everyday people, and a thorn in the side of telecom monopolies. Wheeler worked hard to preserve net neutrality — the principle that internet service providers should treat all traffic on their networks the same. Net neutrality made it illegal to block a website, throttle its loading speed, or charge the website money in return for priority access. It was the only thing stopping providers like Comcast from deciding which websites we can access, and which websites we cannot.

Consuming OData from JavaScript · OData - the Best Way to REST This tutorial will introduce the OData capabilities of the JayData library and gives you all the necessary information to succeed with your OData service via JavaScript. After going through the concept, we will implement a Northwind product editor – full read/write capable - app with JayData and jQuery. We will develop a HTML5/JavaScript client that is using a remote OData endpoint with the unified JavaScript Language Query (JSLQ) syntax. The Trump Resistance Plan: A Timeline – Russia and President Trump Of the Jan. 6, 2017, meeting, when Comey told Trump about the infamous Steele dossier, Trump said: “He shared it so that I would think he had it out there” as leverage against Trump. Of the Feb. 14, 2017, meeting, when Trump said he hoped Comey could see his way to “letting Flynn go,” Trump said: “He said I said ‘hope’ — ‘I hope you can treat Flynn good’ or something like that. I didn’t say anything. But even if he did — like I said at the news conference on the, you know, Rose Garden — even if I did, that’s not — other people go a step further.

Strange Fluctuations in the Magnetic Field Might Signal an Upcoming Pole Reversal The Earth is blanketed by a magnetic field. It’s what makes compasses point north, and protects our atmosphere from continual bombardment from space by charged particles such as protons. Without a magnetic field, our atmosphere would slowly be stripped away by harmful radiation, and life would almost certainly not exist as it does today. You might imagine the magnetic field is a timeless, constant aspect of life on Earth, and to some extent you would be right. But Earth’s magnetic field actually does change.

OData Services Download Source - 1.3MB Table of contents Introduction 9 of the Strangest and Loveliest Dioramas Ever While there are endless different kinds of dioramas, there is something that most all of them have in common: the strange beauty that comes from capturing our world in miniature, in exacting detail. Some of the most impressive examples of this craft are on display in museums around the globe, while others a bit more off the beaten path. From bizarre to beautiful, here are nine places to see these intricate three-dimensional snapshots of the world. Fisher Museum Forestry Dioramas

Legally Blind Woman Sees With VISOR-like Device Geordi La Forge would be proud. Yvonne Felix, a legally blind San Franciscan, can see, and quite well, too, with a device -- a battery-powered headset with liquid lens technology inside -- that resembles the VISOR that Geordi wore on Star Trek: The Next Generation. CNET, as part of their ongoing "Tech Enabled" series about the role techonology plays in helping the disability community, profiled Felix and delved, in tremendous detail, into how the eSight 3 has changed Felix's life. OData Web Services This documentation is archived and is not being maintained. Microsoft Dynamics NAV 2016 The Open Data Protocol (OData) is a web protocol that is designed for querying tabular data and provides you with an alternative to SOAP-based web services. OData builds on web technologies such as HTTP, the Atom Publishing Protocol (AtomPub), and JavaScript Object Notation (JSON) to provide access to information from different applications, services, and stores. OData uses URIs for resource identification and commits to an HTTP-based, uniform interface for interacting with resources. This commitment to core Web principles allows for OData to enable a new level of data integration and interoperability across a broad range of clients, servers, services, and tools.