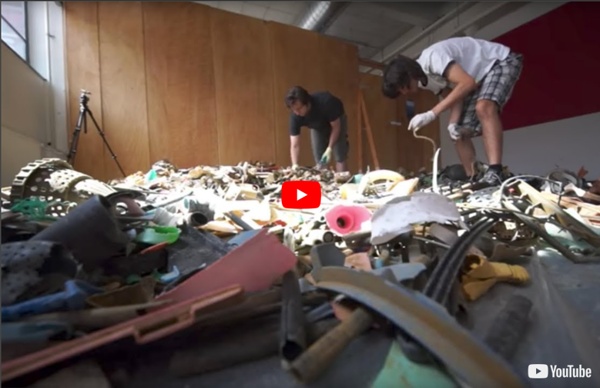 20 Facts About Ocean Pollution The ocean remains one of the most expansive, mysterious and diverse places on Earth. Unfortunately, it is being threatened by pollution from people on land and from natural causes. Marine life is dying, and as a result the whole oceanic ecosystem is threatened simply by various sources of pollution. If we are to preserve ocean and its natural beauty, drastic measures have to be taken to combat this pollution and keep what we hold most dear.

19-year-old inventor finds way to clean up the world’s oceans in under 5 years time By: Jack Taylor, Guest Previously the idea of cleaning up the world’s oceans with their vast accumulations of disposed plastic material was considered an impossibility. Now a 19-year-old inventor says he and his foundation has a way to clean up the world’s oceans, and not only does he say we can do it, but that we can do it in five years time and produce a profit from it. It is called the ‘Great Pacific Garbage Patch’ or sometimes the “Pacific Trash Vortex”, and it is a massive collection of plastic particles accumulating in the Pacific. Other oceans have their own collections of plastic wastes as well; furthermore, most of the debris in our oceans are plastic materials that accounts for approximately 90% of all the waste debris.

Pollution Pollution is the introduction of contaminants into the natural environment that cause adverse change.[1] Pollution can take the form of chemical substances or energy, such as noise, heat or light. Pollutants, the components of pollution, can be either foreign substances/energies or naturally occurring contaminants. Pollution is often classed as point source or nonpoint source pollution. Ancient cultures Air pollution has always accompanied civilizations. Ocean Plastic Will Be Found in 99 Percent of Seabirds by 2050 Plastic pollution in the ocean is like a floating minefield to marine life, from microscopic plankton to giant whales. Now, a new study estimates that plastic debris can be found in the majority of all species of seabirds. It’s no surprise that as more plastic enters the oceans, more seabirds will accidentally eat it. What’s surprising is how much these numbers have escalated over time.

Hyperloop - UW-Physics Garage This project is a Garage home for the UW-Madison student collective BadgerLoop participating in Elon Musk's design challenge. On June 15, 2015 SpaceX announced plans to build a one mile, sub-scale test track of the Hyperloop concept. This is a conceptual, futuristic mode of transportation proposed by Elon Musk in 2013 via a white paper: In addition to building this test track, SpaceX is hosting a design-build-test competition for the pod for this track, targeting university and non-university teams alike from across the world, for the 2015-2016 school year. The 2nd half of this CNN video provides some background. BadgerLoop is UW-Madison’s team for the Hyperloop competition, composed of 50+ active undergraduate and graduate students. The team is driven to make a difference and learn about a new technology in a fast paced environment.

Artist Creates Art From Trash That Washes Up In Mexico From 50 Countries Around The World Sian Ka’an is an extraordinary UNESCO tropical nature reserve along Mexico’s Carribean coastline, but the currents that pass by this area bring garbage from all over the world to the shores of this paradise. Alejandro Duran, an artist working in Brooklyn, NY, collects this trash and arranges it into works of colorful landscape art to examine “the tension between the natural world and an increasingly overdeveloped one.” According to Duran, he has found trash from 50 nations on 6 continents while walking the beaches of Sian Ka’an. Plastics in the Ocean Affecting Human Health Author: Gianna Andrews This case study is part of a collection of pages developed by students in the 2012 introductory-level Geology and Human Health course in the Department of Earth Sciences, Montana State University. Learn more about this project. Mountain of Plastic. Photo credit: Top News, "Scientists Baffled by Mystery of Missing Ocean Plastic", Jamie Williamson, Over a few decades, humans have managed to dump tons upon tons of garbage into the ocean.

Popular Things View More Klöts (Quick shoe ties) by Kart5a Jul 23, 2015 "Pencil" Puzzler by gzumwalt Sep 14, 2015 *NEW* Strong Flex door Carabiner ddf3d Customized by Charlie1982 Sep 13, 2015 Mostly Printed CNC / MultiTool by Allted Mar 15, 2015 How Does Your Plastic Bag Get Into the Ocean? If you live hundreds of miles away from the coast, it probably never occurs to you that the plastic bag or cup lid that you toss into the gutter might make its way into the Atlantic or the Pacific. But somewhere between 40,000 and 110,000 metric tons of plastic waste generated by Americans ends up in the ocean, according to a groundbreaking study published earlier this year in the journal Science. It's difficult to pinpoint where all that refuse originates, and researchers think that much or most of it probably comes from the nation's densely-populated coastlines. But there's also evidence that the nation's inland waterways serve as a conduit for plastic to travel thousands of miles into the oceans. PHOTOS: The Great Atlantic Garbage Patch

Is Origami the Future of Tech? In 1996 a young mathematician and computer scientist named Erik Demaine became fascinated by a magic trick that Harry Houdini used to do before he made his name as an escape artist. The magician would fold a piece of paper flat a few times, make one straight cut with a pair of scissors, and then unfold the paper to reveal a five-pointed star. Other magicians built on Houdini’s fold-and-cut method over the years, creating more intricate shapes: a single letter, for example, or a chain of stars. It’s an odd subject of study for a computer science professor, but Demaine had an unorthodox background.