Tabs that show the theory behind songs - TheoryTab 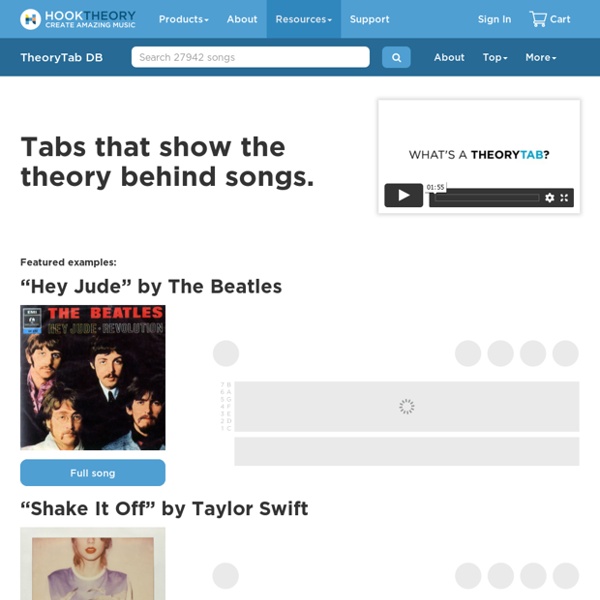 Music Theory: Chords at Learn Music Free Chords are stacks of notes that sound together at the same time. At the base of all Chords is the Triad (three note chord). Triads are made up of the root, third and fifth tones as derived from the scale in use at the time. Even when we have a Chord with lots of extensions (notes added to the triad), we find there is always a triad at its base that is either Major, Minor or Diminished. Jamey Aebersold - Jazz Play-A-Long COMPLETE - Free download @ Gitara1.com 5800 pages | PDF + MP3 Possession of this collection will enable any musician, independently of level and experience in jazz improvisation mastery , learn the basic styles and genres of jazz, and eventually become a true expert in this. Information for reference (for those who do not know): Jamey Aebersold Jazz Play-A-Long - the world's best collections of exercises for jazz musicians. Volume 1: How To Play Jazz & Improvise Beginning/Intermediate. Easy to understand and inspiring for all musicians wishing to explore the secrets of jazz improv.

The Weird and Creepy World of String Harmonics – Soundfly I have played stringed instruments for my entire musical career — namely, the electric bass, then the upright bass, closely followed by acoustic and electric guitars. From my upbringing, string harmonics were primarily a way to tune an instrument (the fifth-fret harmonic of a string being the same pitch as the seventh-fret harmonic of the next string higher), and a nice, airy, shimmering timbre in contrast to the dark, warm tone of the bass notes. I didn’t think much of them beyond that. Later I learned about their potential as an expressive device by using the limited natural harmonics available, as made famous by the inimitable Jaco Pastorius. That said, I never immersed myself fully enough to find out how each individual note was performed in some of his works. It wasn’t until much later in my musical career and schooling that I considered the potential for string harmonics as a compositional tool.

Music Analysis Introduction General Introduction Each musical analysis in this chapter is intended as a practical example of how the techniques and theory in this book and website can be used when analysing pieces of tonal and tonally influenced music with the aim of understanding the way each piece is structured and how root progression patterns and other components of the music contribute to the style of its composition. It should also support the evidence for the theory. Whilst I've tried to make these analyses as self contained as possible, it is intended that you should read earlier sections of the book in order to fully understand all the details. Each of the examples included is accompanied by an analytical outline.

Smiths On Guitar: Frankly Mr. Shankly "If we needed some songs fast, then Morrissey would come round to my place and I'd sit there with an acoustic guitar and a cassette recorder. 'There Is A Light That Never Goes Out' was done that way, and so was 'Frankly Mr Shankly'." "Another talking point is the lyric for 'Frankly, Mr Shankly.' At the time Morrissey didn't say anything about it being a dig at Geoff Travis and his bad poetry, but even if he had done, I wouldn't have cared. Soundslice features Soundslice is the most advanced music education software on the web. Here’s an overview of what you can do with it. The basics Our player shows you beautiful standard notation and tablature right in your web browser.

Greatest Guitar Books – BLOG What to expect from the blog. Here you will find news updates about The 50 Greatest Guitar Books; lessons; articles and essays regarding the latest guitar methods (and more); and recommendations of books I am personally fond of, as well as others of historical note. There will also be guest contributions every now and then. For Shawn’s general guitar and music blog please visit: Prester John Guitar August 8th, 2016: Paganini Re-Revisted Music Animation Machine MIDI Player Home | Site Map | Watch | FAQ | History | Store | Contact Read (or right-click to download) the latest (2010jan28) User Guide. Download latest release: 2006aug19 Release 035 added Note start line option (in View menu) With this program you can listen to your own MIDI files (or play live) while viewing these visualizations: Original bar-graph (short name: MAM) Circle of fifths color wheel (short name: WHEEL)

Guitar/Guitar Chords Song Library The following is a list of notable easy to learn guitar songs from the 1950s to the present. It also contains links to external websites containing different informal chords to songs which represent many different authors' own interpretations of the original songs. Most of the chords on the list are relatively easy to learn, and would be a great start for novice guitar players who are interested in improving their playing abilities. Music Theory Primer: Overview of all keys, key signatures, scales and triads The table below summarises the basic ideas of music theory that relate to keys, key signatures, scales and triads. The key signature, major triad, minor triad and degrees of the scale are listed for all of the common major keys. Just find the key that you want to look up in the left hand column, then read across to find the triads, key signature etc. Note that some degrees of the scale (e.g 2nd & 9th) correspond to the same note.