Daily Zen List — 65 Websites to Help You Save Money 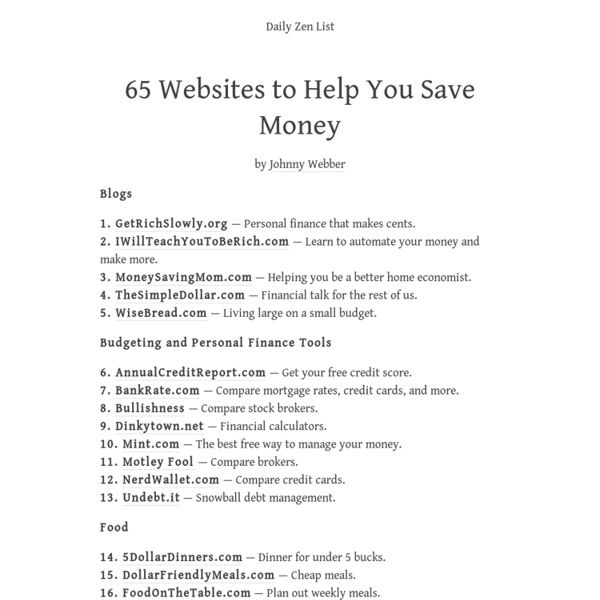 New York Times 50 Most Challenging Words (defined and used) | Currently Obsessed The New York Times recently published a list of 50 fancy words that most frequently stump their readership. They are able to measure this data thanks to a nifty in-page lookup mechanism, which you can try here. Try double-clicking the word “epicenter”. Since the NYT didn’t include definitions of these words, I decided to post a job to MediaPiston to produce an article defining and using each word in the list. Voila! The New York Times 50 Fancy Words (defined and used) 1. 2. 3. 4. 5. 6. 7. 8. 9. 10. 11. 12. 13. 14. 15. 16. 17. 18. 19. 20. 21. 22. 23. 24. 25. 26. 27. 28. 29. 30. 31. 32. 33. 34. 35. 36. 37. 38. 39. 40. 41. 42. 43. 44. 45. 46. 47. 48. 49. 50. A Handbook of Rhetorical Devices Robert A. Harris Version Date: January 19, 2013 This book contains definitions and examples of more than sixty traditional rhetorical devices, (including rhetorical tropes and rhetorical figures) all of which can still be useful today to improve the effectiveness, clarity, and enjoyment of your writing. Note: This book was written in 1980, with some changes since. The devices presented are not in alphabetical order. To go directly to the discussion of a particular device, click on the name below. A Preface of Quotations Whoever desires for his writings or himself, what none can reasonably condemn,the favor of mankind, must add grace to strength, and make his thoughts agreeable as well as useful. Men must be taught as if you taught them not; And things unknown propos'd as things forgot. Style in painting is the same as in writing, a power over materials, whether words or colors, by which conceptions or sentiments are conveyed. Introduction Practice these; try them out. Resources 1. 2. 4.

Top 5 Books That Will Change How You Think! | Huge Relief Fast Self education is vastly underrated! I came across this concept back in my early twenties, and got curious. I figured out that there was nothing that was stopping me more from learning apart from me. And the good news is that when you begin to use self-education to your advantage, you learn on your terms. There are many benefits to self education. So, forgive the proselytizing, but I’m a huge advocate of self-education. Over the years, thanks to self-education, I have learn’t how the cosmology of the multi-verse works (from a spiritual standpoint), how the mind operates (from a psychological standpoint) and why the world is like it is (to a certain degree, anyway;-). Below are the top 5 books that can help you make a similar journey, and books that have not only altered my way of thinking, but got me living more from love and peace than ever before. 1. The book that got being present into the mainstream, and brought being mindful to the masses. 2. 3. 4. 5. About the author

23 Psychological Life Hacks to get an Advantage | Mindzette - Life Hacking Have you always wondered about the subtle things you can do to totally improve the outcome of a situation? It is something that I have constantly been thinking about. After spending some time searching up on the subject I came across some incredible bits of advice from a reddit discussion. From this, I’ve pulled out and organized users’ top advice on how to improve your outcomes. 23 psychological Life Hacks to get a Situational advantage. When you first meet people try to notice their eye color while also smiling at them. 3 Books to Pick up more Psychological Life Hacks Check out these articles! Share these great tips with your friends! 10 counter culture novels that will get you high on life From the European Romantics of the 18th century avant-garde to the pre-WWI Bohemians, the world’s been struck by many a powerful counter-cultural movement. The one that’s closest to our hearts, though, spanned the mid-twentieth century, and was rooted in the USA: from the post-War 1940s right though to the early days of the 1970s, America was bombarded with hippies, flower-power, drop-outs, squatters, pacifist campaigners and (not least) feminists, each of them battling against the status-quo and the staid, conservative middle-classes. And what helped to stir this revolutionary stew? Why, books, of course! Slaughterhouse Five, Kurt Vonnegut (1969) It’s trippy, it’s tragic, and It’s one of the finest, saddest, most savage indictments of war ever written. Franny and Zooey, J.D. The Group, Mary McCarthy (1963) Sex and the City for the sixties (but much smarter), this novel was banned in some counties (Australia – we’re looking at you) when it first came out. Catch-22, Joseph Heller (1961)

Photo essays - Jan Sochor Photography My Advice for Starting a Business By Leo Babauta Recently I encouraged my 13-year-old daughter Maia to start a vegan cupcake business, and it’s so exciting to watch her get started. As I talked to her about starting, she had some worries: She didn’t know how.She didn’t know what kind of business to create.She was worried she’d fail. Do any of those sound familiar? Worry about not knowing what to do, how to do it, and whether you’ll fail … these stop so many people from starting. I’ve launched numerous ventures, from ebooks to courses to my Sea Change membership program and more. Today, I’d like to share the lessons I’ve learned about starting a business, in hopes of encouraging you to get started making something you love. Look for opportunities. Get started, my friends! The Habits of Entrepreneurs My new video interview series launches Monday: Why is this series important? More soon!