Formation of the Chinese Civilization 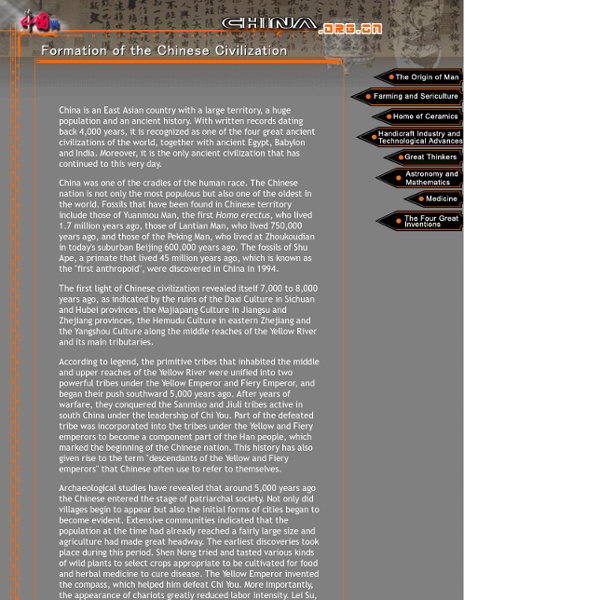 China History: Chronology, Dynasty Qin Han Tang Song Yuan Ming Qing China, one of the countries that can boast of an ancient civilization, has a long and mysterious history - almost 5,000 years of it! Like most other great civilizations of the world, China can trace her culture back to a blend of small original tribes which have expanded till they became the great country we have today. It is recorded that Yuanmou man is the oldest hominoid in China and the oldest dynasty is Xia Dynasty. Chinese society has progressed through five major stages - Primitive Society, Slave Society, Feudal Society, Semi-feudal and Semi-colonial Society, and Socialist Society. Chinese History Chronology Ancient China - The Ancient Chinese Civilization Chinese Historical Accounts the Forbidden City, the home of the Chinese emperors until the last dynasty was overthrown in the 20th century Chinese history, until the twentieth century, was written mostly by members of the ruling scholar-official class and was meant to provide the ruler with precedents to guide or justify his policies. These accounts focused on dynastic politics and colorful court histories and included developments among the commoners only as backdrops. Of the consistent traits identified by independent historians, a salient one has been the capacity of the Chinese to absorb the people of surrounding areas into their own civilization. Sun-Tzu, the realist writer of the the influential "Art of War" The first prehistoric dynasty is said to be Xia , from about the twenty-first to the sixteenth century B.C. The Tomb of Emperor Qin Shi Huang The army of Terracotta warriors as found in situ at the Tomb of the last Qin Emperor The Zhou Period The Birth of Empire The Chinese Gods

Daily Life In Ancient China Daily life in Ancient China is as mysterious as it is old. Ancient Chinese rituals, society, customs and way of life are topics of interest to historians and students alike. If you want to know about life in ancient china read this article … The Chinese society was structurally complex and not much is known about it. Research is still on. Life in old Chinese society on a normal working day was hard and industrious for the farmers while luxurious and laid back for nobles and merchants. There was a wide demographic gap between the farmers and kings and nobles. Position of Women The women of ancient China were not empowered in their society and male domination was very prevalent. The Chinese had many peculiar customs such as foot binding. Religion, Art and Culture Ancient China practiced mainly three religions namely Buddhism, Confucianism and Taoism. The ancient Chinese were master creators, artists, craftsmen and warlords.

Ancient China Inventions China has contributed many modern technological advances; but, have you ever wondered about ancient Chinese inventions? Do you want to know which of Ancient China’s inventions are in use today? Are you interested in how each invention shaped ChinaÃƒÂ¢ As China grows into a modern day superpower, it is important to remember that China as a civilization has existed for more than six millennia and contributed countless inventions that shaped China’s evolution and amazingly continue to shape the modern world. Today gunpowder is associated with military use; however, gunpowder was actually invented by Taoist monks in Ancient China who were searching through alchemy for the answer to human immortality. Compass Another invention of Ancient China’s much like gunpowder was invented with an intended purpose that was different from what it has evolved into—this is the compass. Paper Silk These four inventions are simply a few of many that Ancient China contributed to the world.

Crime and Punishment in Ancient China See, also, China: A Legal History. It was both the spirit and the intent of Han Fei’s legalism, as it came, from time to time, to dominate Chinese law, that punishment for all crimes would be harsh and universal. With seemingly no exceptions, every nation and culture in world history has experimented with cruel and unusual punishment; some still doing so, but most free and democratic societies now banning the practice. China is unusual in that a state policy of isolation, right up to the mid-1970s, made it difficult for Chinese people and policymakers to compare and evolve their law. A century of considerable political unrest starting in the mid-nineteenth century (and eventually leading to Communism) exacerbated matters. Confucius urged the Chinese to exercise restraint in the imposition of law upon the people. The whole point of legalism as it, from time to time, dominated Chinese law, was cruel and unusual punishment. "Trials and Chinese courts of law are conducted by torture.

Aztec Calendar : Mexico Culture & Arts Dale Hoyt Palfrey Mexica/Aztec Calendar Systems The Civil Calendar The solar year was the basis for the civil calendar by which the Mexicas (Aztecs) determined the myriad ceremonies and rituals linked to agricultural cycles. Tonalpohualli - The Ritual Calendar The tonalpohualli (count of days) was the sacred almanac of the Mexicas. Other Ancient Mexico Articles Ancient China Economy Interested in the ancient Chinese economy? Want to know about economic factors that prevailed in ancient China? Read our guide for more facts & information… For 18 of the last 20 centuries, China has had the largest economy in the world. Before that time, the economy of ancient China introduced to the world a number of economic concepts, like the use of coins and money, land distribution for non-aristocrats’, and the development of a merchant class. This time in ancient China is also sometimes referred to as the “Spring and Autumn Period” because it is covered by Confucius’ book The Spring and Autumn Annals, which was a record of ancient history from roughly 770 to 481 BCE. The Warring States Period 476-221 BCE The Warring States Period was the ancient Chinese era of regional warlords consolidating their rule by annexing smaller states around them. Qin Shi Huang and the China Empire 221-210 BCE The Western Han 206 BCE-24 CE