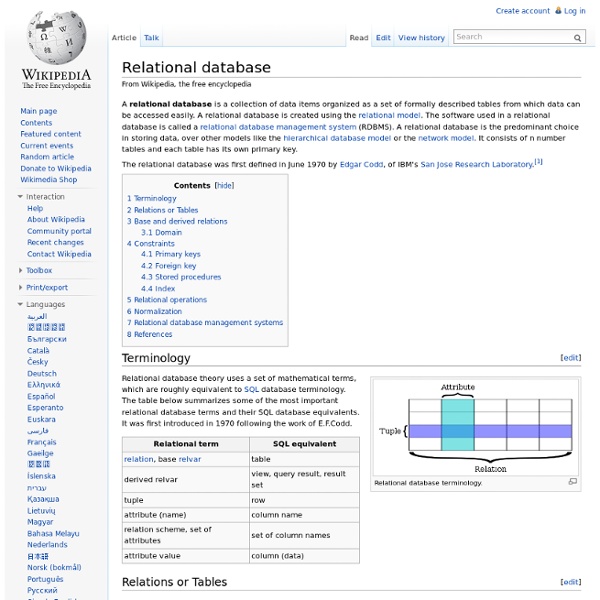 In the relational model, each table schema must identify a column or group of columns, called the primary key, to uniquely identify each row. A relationship can then be established between each row in the table and a row in another table by creating a foreign key, a column or group of columns in one table that points to the primary key of another table. The relational model offers various levels of refinement of table organization and reorganization called database normalization. (See Normalization below.) The database management system (DBMS) of a relational database is called an RDBMS, and is the software of a relational database. In relational databases, each data item has a row of attributes, so the database displays a fundamentally tabular organization. Relational databases are both created and queried by DataBase Management Systems (DBMSs). Terminology[edit] Relational database terminology. Relations or Tables[edit] Tuples by definition are unique. Base and derived relations[edit] Related:  Fuzzy • Methods • trier

T-norm fuzzy logics T-norm fuzzy logics are a family of non-classical logics, informally delimited by having a semantics which takes the real unit interval [0, 1] for the system of truth values and functions called t-norms for permissible interpretations of conjunction. They are mainly used in applied fuzzy logic and fuzzy set theory as a theoretical basis for approximate reasoning. T-norm fuzzy logics belong in broader classes of fuzzy logics and many-valued logics. In order to generate a well-behaved implication, the t-norms are usually required to be left-continuous; logics of left-continuous t-norms further belong in the class of substructural logics, among which they are marked with the validity of the law of prelinearity, (A → B) ∨ (B → A). Both propositional and first-order (or higher-order) t-norm fuzzy logics, as well as their expansions by modal and other operators, are studied. Motivation[edit] T-norm fuzzy logics impose certain natural constraints on the truth function of conjunction. if and or

Ten Common Database Design Mistakes No list of mistakes is ever going to be exhaustive. People (myself included) do a lot of really stupid things, at times, in the name of “getting it done.” This list simply reflects the database design mistakes that are currently on my mind, or in some cases, constantly on my mind. I have done this topic two times before. Before I start with the list, let me be honest for a minute. So, the list: Poor design/planning Ignoring normalization Poor naming standards Lack of documentation One table to hold all domain values Using identity/guid columns as your only key Not using SQL facilities to protect data integrity Not using stored procedures to access data Trying to build generic objects Lack of testing Poor design/planning “If you don’t know where you are going, any road will take you there” – George Harrison Prophetic words for all parts of life and a description of the type of issues that plague many projects these days. Ignoring Normalization Are there always 12 payments? Maintainability

Defuzzification Defuzzification is the process of producing a quantifiable result in fuzzy logic, given fuzzy sets and corresponding membership degrees. It is typically needed in fuzzy control systems. These will have a number of rules that transform a number of variables into a fuzzy result, that is, the result is described in terms of membership in fuzzy sets. For example, rules designed to decide how much pressure to apply might result in "Decrease Pressure (15%), Maintain Pressure (34%), Increase Pressure (72%)". The simplest but least useful defuzzification method is to choose the set with the highest membership, in this case, "Increase Pressure" since it has a 72% membership, and ignore the others, and convert this 72% to some number. A common and useful defuzzification technique is center of gravity. Methods[edit] There are many different methods of defuzzification available, including the following:[1] The maxima methods are good candidates for fuzzy reasoning systems. Notes[edit] See also[edit]

What is database Main » TERM » D » By Vangie Beal (1) Often abbreviated DB, a database is basically a collection of information organized in such a way that a computer program can quickly select desired pieces of data. You can think of a database as an electronic filing system. Traditional databases are organized by fields, records, and files. An alternative concept in database design is known as Hypertext. To access information from a database, you need a database management system (DBMS). (2) Increasingly, the term database is used as shorthand for database management system.

Fuzzy associative matrix A fuzzy associative matrix expresses fuzzy logic rules in tabular form. These rules usually take two variables as input, mapping cleanly to a two-dimensional matrix, although theoretically a matrix of any number of dimensions is possible. Suppose a professional is tasked with writing fuzzy logic rules for a video game monster. In the game being built, entities have two variables: hit points (HP) and firepower (FP): This translates to: IF MonsterHP IS VeryLowHP AND MonsterFP IS VeryWeakFP THEN Retreat IF MonsterHP IS LowHP AND MonsterFP IS VeryWeakFP THEN Retreat IF MonsterHP IS MediumHP AND MonsterFP is VeryWeakFP THEN Defend Multiple rules can fire at once, and often will, because the distinction between "very low" and "low" is fuzzy. An implementation of this system might use either the matrix or the explicit IF/THEN form. There is no inherent pattern in the matrix. This does not mean a fuzzy system should be sloppy. Fuzzy associative memory

Boulevardisme Cognitive map Overview[edit] Cognitive maps serve the construction and accumulation of spatial knowledge, allowing the "mind's eye" to visualize images in order to reduce cognitive load, enhance recall and learning of information. This type of spatial thinking can also be used as a metaphor for non-spatial tasks, where people performing non-spatial tasks involving memory and imaging use spatial knowledge to aid in processing the task.[6] The neural correlates of a cognitive map have been speculated to be the place cell system in the hippocampus[7] and the recently discovered grid cells in the entorhinal cortex.[8] Neurological basis[edit] Cognitive mapping is believed to largely be a function of the hippocampus. Numerous studies by O'Keefe have implicated the involvement of place cells. Parallel map theory[edit] Generation[edit] The cognitive map is generated from a number of sources, both from the visual system and elsewhere. History[edit] The idea of a cognitive map was first developed by Edward C.

National drug databases - EU :: INFOlinks Explanatory note: ATC = database allows search according to ATC classification. Rx/OTC = database allows search according to Rx/OTC. Germany - Fachinformation or Summary of Product Characteristics and Package Leaflet, Public Assessment Reports (for medicines registered via NP or where BfArM is RMS). TokyoBound Ito Seiyu (1882-1961) has been pushing the envelope of kinbaku and torture imagery long before the “Golden Age” of SM magazines, getting some of his better work censored and banned by the authorities, earning him the label of “pervert”. To help you better appreciate this series, first read the following notes on the kanji characters heading each picture and text: Wood (木, ki), Fire (火, hi), Earth (土, tsuchi), Metal (金, kin), and Water (水, mizu) are the “five elements” called Wu Xing (五行) in Chinese. The concepts of Wu Xing can be found anywhere from acupuncture to feng shui (geomancy) to martial arts, and even apply to tea ceremony. Sun (日, hi) and Moon (月, tsuki) plus the five Wu Xing elements also correspond to the days of the week. There goes hardly a description of beauty that doesn’t include the combination of the three kanji characters for Snow (雪, yuki), Moon (月, tsuki), and Flower (花, hana). Now, let’s cut to the chase and enjoy the first installment. Sun 日 (hi) Moon 月 (tsuki) Fire Water

Lotfi A. Zadeh Lotfali Askar Zadeh (born February 4, 1921), better known as Lotfi A. Zadeh, is a mathematician, electrical engineer, computer scientist, artificial intelligence researcher and professor emeritus[1] of computer science at the University of California, Berkeley. Life and career[edit] Zadeh was born in Baku, Azerbaijan SSR,[2] as Lotfi Aliaskerzadeh,[3] to an Iranian Azerbaijanis father from Ardabil, Rahim Aleskerzade, who was a journalist on assignment from Iran, and a Russian Jewish mother,[4] Fanya Koriman, who was a pediatrician.[5] The Soviet government at this time courted foreign correspondents, and the family lived well while in Baku.[6] Zadeh attended elementary school for three years there,[6] which he has said "had a significant and long-lasting influence on my thinking and my way of looking at things. In 1931, when Zadeh was ten years old, his family moved to Tehran in Iran, his father's homeland. Personal life and beliefs[edit] Work[edit] Fuzzy sets and systems[edit] 1965. Notes