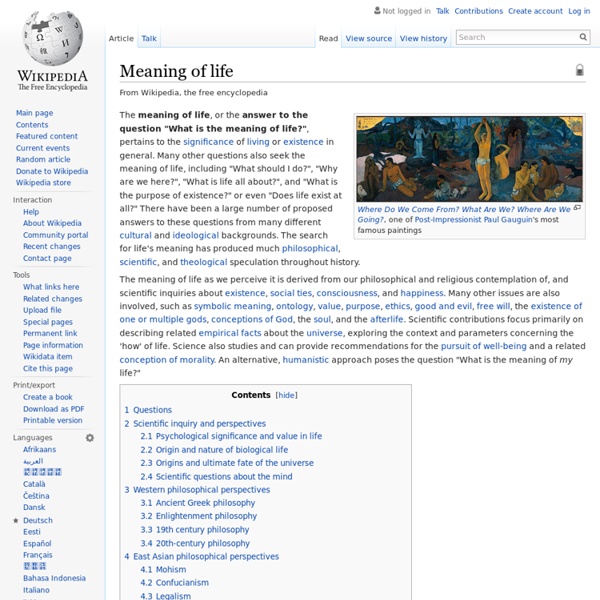 Questions Questions about the meaning of life have been expressed in a broad variety of ways, including the following: What is the meaning of life? What's it all about? Who are we?[1][2][3] Philosopher in Meditation (detail) by RembrandtWhy are we here? These questions have resulted in a wide range of competing answers and arguments, from scientific theories, to philosophical, theological, and spiritual explanations. Scientific inquiry and perspectives Many members of the scientific community and philosophy of science communities think that science can provide the relevant context, and set of parameters necessary for dealing with topics related to the meaning of life. Psychological significance and value in life Neuroscience describes reward, pleasure, and motivation in terms of neurotransmitter activity, especially in the limbic system and the ventral tegmental area in particular. Emerging research shows that meaning in life predicts better physical health outcomes. Parapsychology Platonism

From the classroom to the frontline – schools must be careful what they teach kids about the army By Jonathan Parry *reposted from Dinner time at Harrogate’s army foundation college. Harrogate Army Foundation College Facebook When you think of child soldiers, it might conjure up images of young children far away, taken from their homes and forced to take part in war and fighting, often held against their will. Feature Story: Writing to Heal: Research shows writing about emotional experiences can have tangible health benefits For nearly 20 years, Dr. James W. Pennebaker has been giving people an assignment: write down your deepest feelings about an emotional upheaval in your life for 15 or 20 minutes a day for four consecutive days.