Welcome to The Museum of Science and Industry 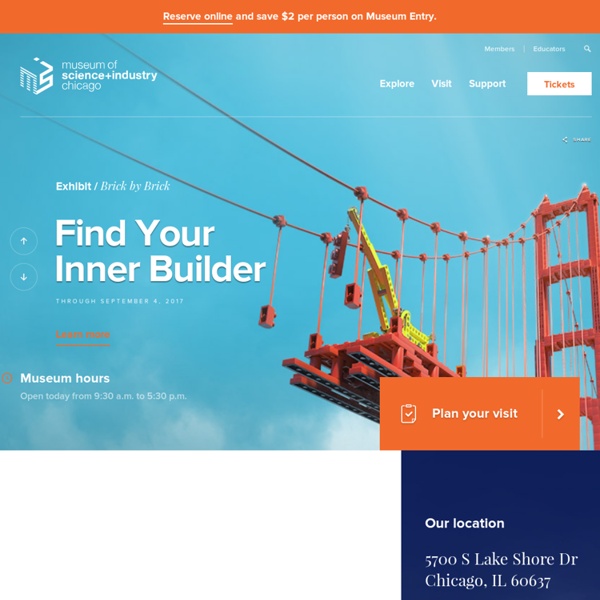 Related:  Seas, Oceans & their Animals. (from Plankton to Sharks

Presentation of the Oceanographic Institute - Institut océanographique - Fondation Albert Ier, Prince de Monaco The Oceanographic Institute is committed to enhancing the knowledge of the richness and fragility of the oceans, and promoting their sustainable management and rational and efficient protection. To achieve this, the Institute ensures the mediation between scientific and socio-economic actors on the one hand, and the public and decision-makers on the other hand. The oceanographic Institute upholds and shares its mission following the wish of its founder Prince Albert Ist of Monaco: « knowing, loving and protecting the oceans ». Knowing - Promote advanced knowledge of the oceans to ensure the scientific grounds for responsible political action; - Develop a network of partnerships allowing the mobilization of the most recent knowledge;

Fab Lab Created by a group of dedicated professionals at MIT, the Fab Lab is a place where ideas become reality. Using a small configuration of machines, anyone with any level of experience can create anything. Through the online Fab Lab community, you can then share those ideas with people half the world away and collaborate on ways to tweak, improve, or polish your designs. Click on one of the links below to hear stories about some amazing things that people have done with Fab Lab: Millennium Park DCASE Homepage > Millennium Park Discover a state-of-the-art collection of architecture, landscape design and art that provide the backdrop for hundreds of free cultural programs including concerts, exhibitions, tours, and family activities. In Millennium Park, you’ll find a new kind of town square – a lively, spectacular gathering spot located in the heart of the city and a destination for Chicagoans and visitors alike.

New Museum Blog - Miami Science Museum Building a new museum facility that will become a cultural icon of a vibrant city is by nature a team effort of Museum staff and community support. The Museum’s annual Galaxy Gala and Big Bang event is the showpiece of this team effort, as proceeds from the event support the Museum’s new state-of-the-art facility currently under construction in downtown Miami’s Museum Park. Over 700 of Miami’s business, civic, philanthropic, and young professional leaders recently gathered at the 2014 Galaxy Gala and Big Bang event. Founded by Museum Board of Trustees Co-Chairs Trish and Dan Bell, this 12th annual Galaxy Gala was the most out-of-this-world experience yet.

Sea-level Rise - CSIRO & ACECRC We love the coast. Coastal regions, particularly some low-lying river deltas, have very high population densities. In excess of 150 million people live within 1 metre of high tide level, and 250 million within 5 metres of high tide. Fab Lab : Century College From idea to reality Our Digital Fabrication Laboratory (Fab Lab), located on Century College’s East campus, is a “hi-tech tinkers” workshop for inventors and people who have a need to design, prototype and build things. In our lab, individuals who can envision an idea, have access to a variety of technologies which allow them to produce an end product through the use of computer-aided design and desktop manufacturing technologies. The Fab Lab is available to Century students, faculty and staff. Lab equipment

Chicago Park District: Buckingham Fountain Clarence F. Buckingham Memorial Fountain, one of the largest in the world, is located at Columbus Drive (301 East) and Congress Parkway (500 South) in Grant Park and runs from 8 a.m. to 11:00 p.m. daily, typically from April to mid-October, depending on weather. Times are subject to change when large events take place in or around Grant Park. While in operation, every hour on the hour for 20 minutes the Fountain produces a major water display and the center jet shoots 150 feet into the air.

FAB LAB The Fab Lab Welcome to the workshop of the future designed to connect people and their ideas to the world! Along the way, you will create, collaborate, learn and build just about anything you can imagine. Fab Lab: Connecting physical and digital realms - University of Florida Design, Construction and Planning October 06, 2011 Out with the X-Acto knife, in with the latest technology. With the Art and Architecture Fabrication Laboratory, or A² Fab Lab, students and faculty alike have more opportunities to explore new ways of creating. Located in the Architecture Building, the lab currently houses three primary technologies – laser cutters, 3D printing and 3D scanning, each of which provides different ways of bridging between physical and digital realm.

Ocean debris leads the way for castaway fisherman The fisherman who washed up on the Marshall Islands last weekend was very lucky to have stranded on a remote beach there. The currents in the Pacific Ocean would have inevitably taken him into the great garbage patch of the North Pacific, where he could then have been floating for centuries to come. The castaway - Jose Salvador Alvarenga, a fisherman from El Salvador - reportedly left Mexico in November 2012. He and his friend Ezequiel only planned for a short a fishing trip, but he ended up alone in his boat in the middle of the Pacific Ocean. His friend died about a month into the journey and Mr Alvarenga apparently survived on a diet of fish, birds and turtles, and by drinking turtle blood and rainwater. Drifting westward

HERMES: Hotspot Ecosystem Research on the Margins of European Seas HERMES - an international, multidisciplinary research programme investigating Europe's deep marine ecosystems and their environment Funded by the European Commission, HERMES brought together expertise in biodiversity, geology, sedimentology, physical oceanography, microbiology and biogeochemistry so to better understand the relationships between biodiversity and ecosystem functioning. HERMES study sites extend from the Arctic to the Black Sea and include biodiversity hotspots such as cold seeps, cold-water coral mounds and reefs, canyons and anoxic environments, and communities found on open slopes. These important systems were chosen as a focus for research due to their possible biological fragility, unique genetic resources, global relevance to carbon cycling and susceptibility to global change and human impact. HERMES started work in April 2005, and ran for 4 years, with completion in March 2009.

Ocean acidification NOAA provides evidence for upwelling of corrosive "acidified" water onto the Continental Shelf. In the figure above, note the vertical sections of (A) temperature, (B) aragonite saturation, (C) pH, (D) DIC, and (E) pCO2 on transect line 5 off Pt. St.