The Twenty-Five Most Colourful World Cities 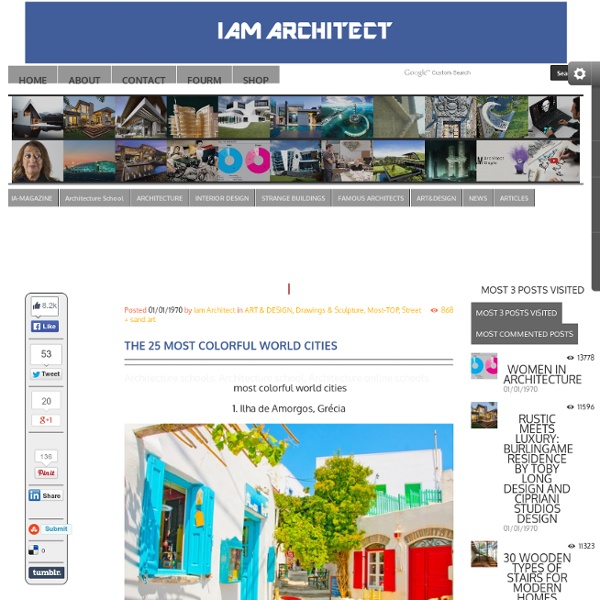 The Seventeen Most Beautifully Painted Stairs From All Over The World Just wait until you take a look at these 17 astounding staircases from all around the world. Their bright colors, fantastic patterns, and detailed images are sure to wow you. They’re all amazing works, many of which look like something you could proudly display on a wall. And, the best part is, while some were painted by artists, 10 Most Beautiful Villages in Europe From the Alps to the Mediterranean, these frozen-in-time European villages will make you appreciate the beauty of taking it slow. Reaching some of these European beauties requires extra effort, yet the rewards are dazzling. Your eyes will thank you.

The Most Wonderful Castles From Around The World Since childhood castles are explaind as grand places, full of your favorite fairytale characters and their dreaded evil step mothers. No matter where it is or who lives there, castles contain such a majestic air about them. Castles can be romantic, spooky, historical, or downright beautiful, and usually they are all of the above. Back in the medieval period, most castles were built as a form of control, so that a ruling family could keep watch over their surrounding town. Today many castles from the past stand tall and proud, a memory of all that has happened there, and all that stands to come. Let these castles transport you to another world, can you only imagine what living at these castles would be like?!

The Ten Most Famous Streets In The World 26 Flares Twitter 22 Facebook 0 Google+ 4 Pin It Share 0 Email -- 26 Flares × 1. Lombard Street Advertisement The Top 50 Cities to See in Your Lifetime  Buena Vista Images via Getty Images With our ever-expanding bucket lists, it’s sometimes easy to lose sight of the essentials. Well, we’ve gone to the community of travelers at minube.net with a simple goal: find the greatest destinations on Earth. 33 Unbelievable Places To Visit Before You Die. I Can't Believe These Actually Exist On Earth... So many other-worldly places exist right on our planet, and we never even knew about it. Here are 33 landmarks that look like paintings and scenes from science fiction movies. earthporm.com During the rainy season, the world’s largest salt flat becomes the world's largest mirror. The Salar was born when several prehistoric lakes joined into one. The salt flat is so reflective, it’s used to calibrate satellites.

The Thirty Most Picturesque Winter Towns From Around The World Rothenburg ob der Tauber is an incredibly well preserved medieval old town that every winter transforms into something that resembles a fairytale. Mt Buller is one of the few places in Australia that actually see frequent snowfall. This beautifully snow-capped mountain region is popular with bikers, skiers, snowboarders, and hikers. Surrounded by mountain paths, El Chaltén is popular with trekkers during the summer. Most Beautiful Villages Around The World photo Popeye Village, is a group of rustic and ramshackle wooden buildings located at Anchor Bay in the north-west corner of the Mediterranean island of Malta. Photo by: Mosin Village on the bank of the Niger river, Mali. Photo by: Yann Arthus-Bertrand Hidden mountain village in Southern China. Photo by: Christian Ortiz