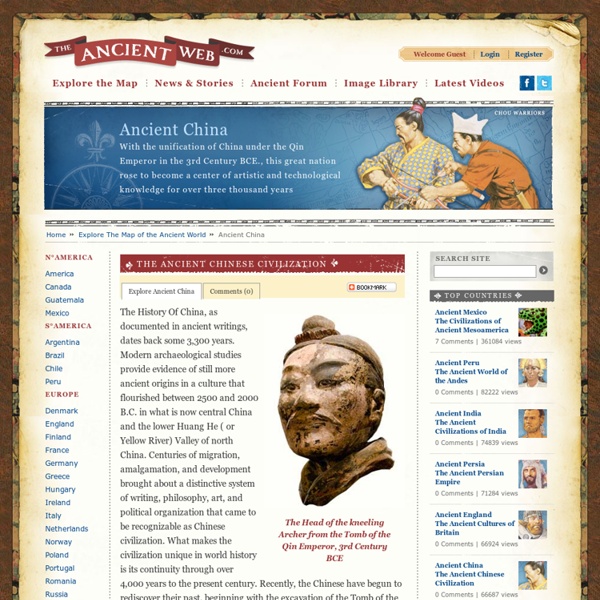 Chinese Historical Accounts the Forbidden City, the home of the Chinese emperors until the last dynasty was overthrown in the 20th century Chinese history, until the twentieth century, was written mostly by members of the ruling scholar-official class and was meant to provide the ruler with precedents to guide or justify his policies. These accounts focused on dynastic politics and colorful court histories and included developments among the commoners only as backdrops. The historians described a Chinese political pattern of dynasties, one following another in a cycle of ascent, achievement, decay, and rebirth under a new family. Of the consistent traits identified by independent historians, a salient one has been the capacity of the Chinese to absorb the people of surrounding areas into their own civilization. Sun-Tzu, the realist writer of the the influential "Art of War" The first prehistoric dynasty is said to be Xia , from about the twenty-first to the sixteenth century B.C.

The Real Reason America Used Nuclear Weapons Against Japan. It Was Not To End the War Or Save Lives. Like all Americans, I was taught that the U.S. dropped nuclear bombs on Hiroshima and Nagasaki in order to end WWII and save both American and Japanese lives. But most of the top American military officials at the time said otherwise. The U.S. Strategic Bombing Survey group, assigned by President Truman to study the air attacks on Japan, produced a report in July of 1946 that concluded (52-56): Based on a detailed investigation of all the facts and supported by the testimony of the surviving Japanese leaders involved, it is the Survey’s opinion that certainly prior to 31 December 1945 and in all probability prior to 1 November 1945, Japan would have surrendered even if the atomic bombs had not been dropped, even if Russia had not entered the war, and even if no invasion had been planned or contemplated.

Chinese Dynasty Guide - The Art of Asia - History and Maps Chinese history, which dates back more than 5,000 years, is extraordinarily rich, complex-and potentially confusing. Understanding at least its basic chronology and some of its most notable events and developments is made somewhat easier by virtue of its ancient system of dynasties. The word dynasty means, quite simply, a succession of rulers from the same family. Beginning with the Bronze Age Shang dynasty, historical eras in China have borne the name of the family or clan that dominated during that period. Some dynasties, such as the Chou and the Ming, lasted for centuries. Others, such as the Ch'in and the Sui, ended after a few decades.

East India Company - Once world’s most powerful corporation 2 clicks It was the most powerful multinational corporation the world had ever seen. Founded in 1600, the English East India Company’s power stretched across the globe from Cape Horn to China. The company was established for trading, with a royal charter by Queen Elizabeth I granting it a monopoly over business with Asia. Imagine a company with the influence of Google or Amazon, granted a state-sanctioned monopoly and the right to levy taxes abroad But the Company’s influence went further. It owned the ports of Singapore and Penang and played a major role in developing cities including Mumbai, Kolkata and Chennai. Chinese History - Common Core From at least 1766BCE to the twentieth century of the Common Era, China was ruled by dynasties. A dynasty is a family that passes control from one generation to the next. A dynasty does not have to last for a long time.

China: Surviving the Camps by Zha Jianying By now, it has been nearly forty years since the Cultural Revolution officially ended, yet in China, considering the magnitude and significance of the event, it has remained a poorly examined, under-documented subject. Official archives are off-limits. Serious books on the period, whether comprehensive histories, in-depth analyses, or detailed personal memoirs, are remarkably few. Zhou Dynasty, Zhou Dynasty History, History of Ancient China, China's dynasties Era Information Time: 1027 B.C.-221B.C.Location of Capital:Hao, near the city of Xian, Shannxi ProvinceEmperors: Twelve kings for eleven dynasties Replaced by:Spring and Autumn Period According to Chinese accounts, Zhou was built by a chieftain of a tribe called Zhou. The chieftain overthrew Shang’s last ruler and build the Zhou dynasty. He settled down in Hao, a city near today’s Xi’an city in Shannxi province. Take a Xian Tours to experience the historical site. Zhou dynasty has lasted for a long time from 1027B.C. to 221B.C.

Ancient China - Ancient Civilizations East Asia also has dry areas. The Gobi Desert is found along the border between Mongolia and China. The Gobi is the 5th largest desert in the world and is also the coldest. It is common to see frost or even snow on the sand and gravel dunes. Most of western China is very dry because of the rain shadow created by the Himalaya Mountains. A rain shadow is a dry area on the leeward (opposite of windward) side of a mountainous area.

What is the Mandate of Heaven in China? Answer: The "Mandate of Heaven" is an ancient Chinese philosophical concept, which originated during the Zhou Dynasty (1046-256 BCE). The Mandate determines whether an emperor of China is sufficiently virtuous to rule; if he does not fulfill his obligations as emperor, then he loses the Mandate and thus the right to be emperor.

China History: Chronology, Dynasty Qin Han Tang Song Yuan Ming Qing China, one of the countries that can boast of an ancient civilization, has a long and mysterious history - almost 5,000 years of it! Like most other great civilizations of the world, China can trace her culture back to a blend of small original tribes which have expanded till they became the great country we have today. It is recorded that Yuanmou man is the oldest hominoid in China and the oldest dynasty is Xia Dynasty. From the long history of China, there emerge many eminent people that have contributed a lot to the development of the whole country and to the enrichment of her history. Among them, there are emperors like Li Shimin (emperor Taizong of the Tang), philosophers like Confucius, great patriotic poets like Qu Yuan and so on.

Infobase Most of the laws of Ancient China came from the moral teachings written in the legal-code books. The basic law was devotion of children to parents and obedience to the government. The rest of the laws consisted of orders that were handed down by the emperors. It was the duty of the mandarins (important Chinese officials) to teach the laws to the people, who would gather twice a month for this purpose.

Asia was settled in multiple waves of migration, DNA study suggests An international team of researchers studying DNA patterns from modern and archaic humans has uncovered new clues about the movement and intermixing of populations more than 40,000 years ago in Asia. Using state-of-the-art genome analysis methods, scientists from Harvard Medical School and the Max Planck Institute for Evolutionary Anthropology in Leipzig, Germany, have found that Denisovans -- a recently identified group of archaic humans whose DNA was extracted last year from a finger bone excavated in Siberia -- contributed DNA not just to present-day New Guineans, but also to aboriginal Australian and Philippine populations. The study demonstrates that contrary to the findings of the largest previous genetic studies, modern humans settled Asia in more than one migration. According to David Reich, a professor of genetics at Harvard Medical School, "Denisova DNA is like a medical imaging dye that traces a person's blood vessels. Genetic footprints

Ancient China Religions, Ancient Chinese Religious Beliefs Advert Ancient China Religion: History has witnessed that religion has always evolved with the evolution of different civilizations and various beliefs have come and disappeared along with the disappearance of a particular civilization. This Japanese Scroll Was Re-Printed a Million Times—700 Years Before Gutenberg - Atlas Obscura Empress Shōtoku occupied the Japanese throne twice. She ruled first from 749 to 758 C.E. as Empress Kōken, abdicating because she fell into a depression. In 761, following her mother’s death, a Buddhist monk named Dōkyō was brought in to help her. The two grew close, and Shōtoku soon promoted him to high levels of government far out of step with his nominal political experience. Her cousin Fujiwara no Nakamaro questioned her judgment, and a battle ensued that ended in the cousin’s death and Shōtoku’s renewed claim to the throne. With Dōkyō at her side, she ruled as Empress Shōtoku from 764 to 770.