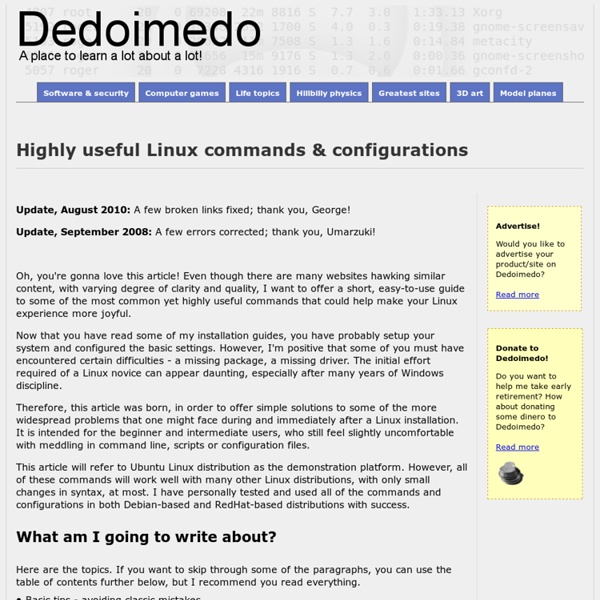 Update, August 2010: A few broken links fixed; thank you, George! Update, September 2008: A few errors corrected; thank you, Umarzuki! Oh, you're gonna love this article! Even though there are many websites hawking similar content, with varying degree of clarity and quality, I want to offer a short, easy-to-use guide to some of the most common yet highly useful commands that could help make your Linux experience more joyful. Now that you have read some of my installation guides, you have probably setup your system and configured the basic settings. However, I'm positive that some of you must have encountered certain difficulties - a missing package, a missing driver. Therefore, this article was born, in order to offer simple solutions to some of the more widespread problems that one might face during and immediately after a Linux installation. This article will refer to Ubuntu Linux distribution as the demonstration platform. What am I going to write about? Here are the topics. Basic tips .

Gnome Shell - One desktop to bind them all Updated: January 17, 2010 Gnome Shell is the future window manager for UNIX-like operating systems running the Gnome desktop environment. It is slated to be part of the Gnome 3.0, which will probably be released sometime next year. Gnome Shell is available in the repositories of some of the recent Linux distribution releases, like Fedora 12 Constantine and Ubuntu 9.10 Karmic Koala, which I used to testdrive Gnome Shell. So follow me for a spin. Starting Gnome Shell After installing it via the repositories, you need to fire it up. In Ubuntu, you will either have to create a shortcut or invoke the application using the command line. gnome-shell --replace After a few seconds, your desktop will turn into a futuristic concept, a blend between Ubuntu Netbook Remix (UNR) and Moblin. Gnome Shell is rather handsome. Not surprisingly, Gnome Shell uses the Clutter technology, also present in Moblin, which explains the look and file of the desktop switching. So what do we have here? Using Gnome Shell

SSH Connection Limitations Linux Directory Structure (File System Structure) Explained with Examples by Ramesh Natarajan on September 8, 2010 Have you wondered why certain programs are located under /bin, or /sbin, or /usr/bin, or /usr/sbin? For example, less command is located under /usr/bin directory. Why not /bin, or /sbin, or /usr/sbin? What is the different between all these directories? In this article, let us review the Linux filesystem structures and understand the meaning of individual high-level directories. 1. / – Root Every single file and directory starts from the root directory.Only root user has write privilege under this directory.Please note that /root is root user’s home directory, which is not same as /. 2. Contains binary executables.Common linux commands you need to use in single-user modes are located under this directory.Commands used by all the users of the system are located here.For example: ps, ls, ping, grep, cp. 3. 4. 5. Contains device files.These include terminal devices, usb, or any device attached to the system.For example: /dev/tty1, /dev/usbmon0 6. 7. 8. 9.

Linux super-duper admin tools: Strace Updated: January 29, 2010 In my LKCD and Kdump tutorials, I've mentioned a large number of sequels, including tutorials showing how to work with kernel crash dump processing and analysis tools, how to debug applications and more. Well, one such sequel has just arrived and it's about the most important level II debugging tool available: strace. Introduction Strace is a utility that can trace system calls. By hooking these calls, we can get a better understanding of how a process behaves, especially if it's misbehaving. Today, we will learn when to use strace, how to use it, how to interpret its output, how to glean errors from the strace output, and solve problems quickly and efficiently. Follow me. Strace from the standpoint of a system administrator Using strace requires some basic hacking instinct. Strace has friends ... Strace is not the only utility that can trace system calls. We will talk about these in detail, as well. What you need to know before you start using strace Examples! Cheers.

Ubuntu 13.04 Linux Server Debuts. Should You Upgrade? Every six months, Ubuntu Linux comes out with a new server release. It is however only once every two years that one of those releases is labeled as an Long Term Support (LTS) release. The Ubuntu 13.04, aka The Raring Ringtail release, is out today and is a standard (non-LTS) release. The difference between an LTS release and a standard release is support length, which is a big deal for server users in production. LTS releases receive five years of support, while standard releases only get 9 months. Mark Baker, Ubuntu Server Product Manager at Canonical, explained to ServerWatch that the 'Raring' release is an interim release where new items are brought in with the goal of them landing in a future LTS. In the case of some of the new items in Ubuntu 13.04, several key ones will be made available to Ubuntu 12.04 LTS server users as well. Ubuntu 13.04 features the latest OpenStack Grizzly cloud platform release, including new high-availability features baked in by Ubuntu.

Sharing folders between Windows and Linux Updated: July 22, 2008 This is a task that bothers many Windows users turned Linux newbies. How to share data between these two completely different operating systems. The experience usually goes like this: accessing Windows share from Linux is a simple thing. But accessing Linux files from a Windows machines is a pain. Well, I'm going to show something that would have been considered almost a blasphemy three years ago. Furthermore, I'm going to do this with the Linux distro running a firewall - which will have to be configured to allow the sharing. If you are wondering what this last sentence is all about: Slackware is a distribution aimed at medium to well-experienced Linux users - definitely not new users! Some other useful articles are: Installing Slackware Linux - Full tutorial Highly useful Linux commands & configurations Now, let's get to business. Sharing service, part one Firewall, part one Like all Linux distributions, Wolvix uses the iptables to filter network traffic. Users Shares

Ubuntu 13.04 (nginx, BIND, Dovecot, ISPConfig 3 Version 1.0 Author: Falko Timme <ft [at] falkotimme [dot] com> Follow me on Twitter Last edited 04/29/2013 This tutorial shows how to prepare an Ubuntu 13.04 (Raring Ringtail) server (with nginx, BIND, Dovecot) for the installation of ISPConfig 3, and how to install ISPConfig 3. ISPConfig 3 is a webhosting control panel that allows you to configure the following services through a web browser: Apache or nginx web server, Postfix mail server, Courier or Dovecot IMAP/POP3 server, MySQL, BIND or MyDNS nameserver, PureFTPd, SpamAssassin, ClamAV, and many more. This setup covers nginx (instead of Apache), BIND (instead of MyDNS), and Dovecot (instead of Courier). If you want to use nginx instead of Apache with ISPConfig, please note that your nginx version must be at least 0.8.21, and you must install PHP-FPM as well. Please note that you cannot use this tutorial for Debian Squeeze because Squeeze comes with an older nginx version (0.7.67.) and does not have a PHP-FPM package! 1 Requirements

An A-Z Index of the Bash command line Commands marked • are bash built-ins Many commands particularly the Core Utils are also available under alternate shells (C shell, Korn shell etc). More bash commands: Linux Command Directory from O'Reilly, GNU CoreUtils.SS64 bash discussion forumLinks to other Sites, books etc Installing Slackware Linux - Full tutorial Updated: December 15, 2006 Slackware is one of the earlier Linux distributions. In a way, it is the "original" Linux. Although less frequently updated than many other, more popular distributions, Slackware aims at stability and simplicity. I will try to write down a step-by-step tutorial, which will allow you to sample of the original taste of Linux. You can read more about Slackware on the official The Slackware Linux Project site. I will assume that you have read my other Linux tutorials - Installing SUSE Linux and Installing (K)ubuntu Linux - and have already mastered a good grasp of using VMware Player / Server to simulate installations, have confidence in partitioning hard disks and understand the basic Linux principles. While the above issues may put you off, you should note these clear advantages before giving up: Slackware is a highly stable platform - simple, robust and secure. A computer - 486 a bare minimum, P2 or higher for graphical environments (desktops).