An open letter to privileged people who play devil’s advocate 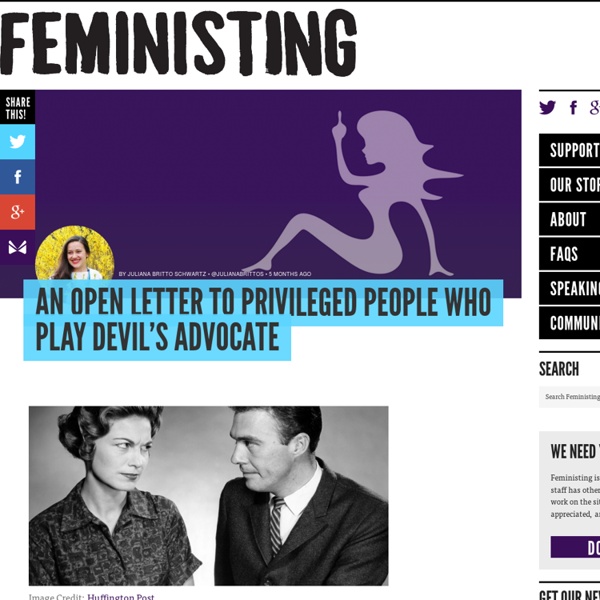 You know who you are. You are that white guy in an Ethnic Studies class who’s exploring the idea that poor people might have babies to stay on welfare. Or some person arguing over drinks that maybe a lot of women do fake rape for attention. Or, recently, someone insisting that I consider the idea that Elliot Rodger could have been a madman and an anomaly, not at all a product of a white supremacist and misogynistic society. Most of the time, it’s clear that you actually believe the arguments you claim to have just for the heck of it. However, you know that these beliefs are unpopular, largely because they make you sound selfish and privileged, so you blame them on the “devil.” These discussions may feel like “playing” to you, but to many people in the room, it’s their lives you are “playing” with. To be fair, there are many privileged devil’s advocates out there who are truly trying to figure things out. So dearest devil’s advocates: speak for yourself, not for the “devil.”

Be Bossy: Sophia Amoruso Has Advice For Millennials and a Bone to Pick With Sheryl Sandberg Nasty Gal’s office in downtown Los Angeles is a cool girl’s fantasy of corporate life. There are potted fiddle figs, Rihanna on the sound system, rainbow sprinkles in the communal fridge. There is a yoga room. There are printouts of Lil’ Kim and Shelley Duvall taped to the walls. There are dogs, but only cute dogs of cuddling dimensions: “We’re a dog-friendly workplace, but the dog has to be under 25 pounds,” says Nasty Gal’s 30-year-old founder and CEO, Sophia Amoruso. “That’s an official rule.”

Not all men: How discussing women’s issues gets derailed. Photo by Shutterstock / ollyy The following article is a discussion about violence, violence against women, and the oppression women face every day. Have a care if these topics disturb you. Jiggle Tests, Dunk Tanks, and Unpaid Labor: How NFL Teams Degrade Their Cheerleaders Cheerleaders for the Tampa Bay Buccaneers perform during a game.Imago/ZUMA NFL cheerleaders might appear to be a happy, peppy bunch, but off the sidelines their working conditions are far from cheery. On Monday, a former cheerleader for the Tampa Bay Buccaneers sued the team, claiming she was paid less than $2 per hour during her 2012-13 season of work. It was the fifth such lawsuit this year; cheerleaders for the Oakland Raiders (Raiderettes), the Cincinnati Bengals (Ben-Gals), the New York Jets (Flight Crew), and the Buffalo Bills (Jills) have filed similar suits.

‘I came to the UK and I was turned into a prostitute’ – trafficked women share their horrific stories Last year Theresa May announced new legislation to end human trafficking and modern slavery, describing it as the “evil in our midst”. Figures from the National Crime Agency in September estimated that 2,744 people, including 602 children, were trafficked for exploitation in the UK in 2013, a 22% increase on 2012, and forced to work in brothels, in domestic servitude, or exploited in factories, farms and building sites. Since this is such a hidden issue, the actual numbers are assumed to be much higher. No, women aren't as likely to commit violence as men Not only is there no data that supports such a claim - a common cry in online comments sections - but the data that we do have proves the exact opposite. Pick any article on the internet about the violence men commit against women and you can pretty much guarantee that at least one of the first five comments under it will be from a man furious that feminists are ignoring the unreported epidemic of women’s violence against men. Most of the time it’s quite obvious they’ve not even read the article in question; it’s almost like a reflex action. A reflexive jerk, if you will. It’s time to stop; this is a rubbish claim.

Meet the EU Parliament’s (Likely) First-Elected Feminist Party Member Europe's parliamentary elections are expected to end this weekend with a surprising first: The first-ever member elected from a feminist party to the European Parliament. Less surprising is the likely MEP’s country of origin, Sweden. The bastion of gender equality has a nine-year-old feminist political party, the Feminist Initiative (which also has outposts in Germany and France), and it is on track to secure the 4 percent of the country’s vote necessary to send a representative to the EU’s legislative body. At the top of the party’s batting order is Soraya Post, 57, a longtime human rights activist who spoke to the Cut from Stockholm, where she’s wrapping up her campaign.

Paul Elam Being born in the mid 50’s, I grew up in a much different world than we live in today. My father was career military, serving faithfully through two wars and bearing the scars to prove it. My mother served as well, being an army wife and raising three boys. She earned a masters degree with honors after, and only after, that job was done.

Made To Penetrate: Female-on-Male Rape Charlie woke up to a blank-faced girl straddling him. He had been disrobed, was erect, and as her hips began to shift in short, quick movements, he realized he was inside of her. Frozen with disbelief, Charlie laid still. He faked climaxing, hoping it would prompt her to dismount and leave the room. Eventually she did, but only after he rolled to his side and pretended to sleep. Men’s rights activist Paul Elam: “If we want society to advance, we need to leave men alone to do their work” It’s almost quittin’ time on a Friday, everyone. Let’s go out on a high note. Paul Elam, the founder of men’s rights group and human garbage army A Voice for Men, wants women to just leave men alone already because women are always getting in the way and then society can’t be excellent! (Men are excellent at excellence, but women are never doing excellent things, obviously.) “There’s just a different way that men do things with each other, and it results in excellence,” Elam said on something called the ManStream Media. “In civilization.

Tina Belcher's Sexual Revolution There are only a few hard and fast rules to know when living in the universe of the network sitcom: 1. Marriages are held together by the sheer power of constant bickering. 2. How Iran Became One of the World's Most Futuristic Countries Imo the government should take it a step further, free contraception and a cash stipend for not having children. We need to do this here in USA, and get Catholicism behind it. I understand the reasoning behind the old rule to help promote and populate more people into Christianity through wars, famine, and plague, but we're in a new age now; the fact that the most powerful church doesn't push contraceptives more and supports having tons of babies thus overpopulating the world bringing it to it's knees is just CRAZY. This is not a bash on a religion in particular it's just picking on the big guy so that the others may fall in. We have to do something to keep all these "god loving" (and non) on this planet.