When is the social curation bubble going to burst? 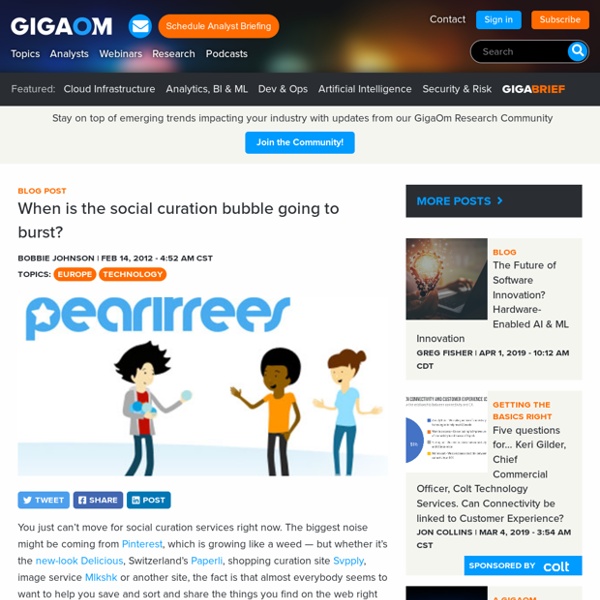 You just can’t move for social curation services right now. The biggest noise might be coming from Pinterest, which is growing like a weed — but whether it’s the new-look Delicious, Switzerland’s Paperli, shopping curation site Svpply, image service Mlkshk or another site, the fact is that almost everybody seems to want to help you save and sort and share the things you find on the web right now. With this swirl of activity, then, it’s no surprise to hear that Parisian service Pearltrees — slogan “collect, organize, discover” — has just raised another $6 million of funding, led by local conglomerate Groupe Accueil. The company, which has been running in public since 2009, welcomed the injection of funds as a way to help expand and scale up its system for bookmarking and organizing, which is based around a clustered visual interface. And it needs that scale. Right now Pearltrees is small and has moderate momentum, building up 350,000 users in the past three years.

19 Reasons You Should Include Visual Content in Your Marketing [Data] Pretty pictures are the best. But you know who likes them even more than your readers, leads, and customers? Marketers. Well they should, anyway, because marketers who are embracing visual content are seeing huge returns in terms of, well, more readers, leads, and customers. Oh, also revenue. Pearltrees Hits Android, as it Prepares to Become a File Manager Pearltrees is a content curation startup that we’ve been tracking for some time now, and today it’s launching an app on Android. However, there’s a twist, as the launch points towards an expansion of exactly what this service is all about. As with the Web and iOS versions of Pearltrees, the Android app allows you to create, share and explore mindmap-style ‘trees’ of content. So, I could create a tree of articles, images and notes related to a particular theme and then if you searched Pearltrees for that theme, you’d find my tree and related ones by other people. It’s a highly visual, logical way of organizing and sharing ideas and information, and the Android app benefits from the OS’ built-in sharing capabilities. Any Web page can be added to a tree straight from the share menu in your browser.

About Svpply is a community of people discovering the products they love. Every one of the 1.1 Million products in our Shop section has been selected by hand by one of our members, and brought to our site using our bookmarklet. We bring in a little over 3,000 new products a day from all across the web. We unofficially represent over 70,000 stores and brands. We are actively working towards giving them access to their inventory and their audience. (If you’re a store owner, read more here) In September of 2011, Svpply joined the eBay NYC family.

With 5 Million More Euros in the Bank, Pearltrees Gets Ready to Scale and Start Monetizing The Paris-based social curation platform Pearltrees just announced that it has raised a Series B round of 5 million Euros (about $6.62 million USD). The money is coming from Group Accueil, which had also invested in the service’s previous round. In total, Pearltrees has now raised 8.5 million Euros. The company, which launched its first alpha almost 3 years ago, aims to use this money to scale its product and – maybe even more importantly – implement a freemium business model for its service. The company did not publicly discuss what exactly this freemium model will look like. Pearltrees is probably best known for its highly visual interface to its collaborative curation service.

Muzio’s beautiful iOS app makes it easier than ever to curate & share memories What's next in mobile? Find out at MobileBeat, VentureBeat's 7th annual event on the future of mobile, on July 8-9 in San Francisco. Register now and save $400! Tons of apps let you share photos and videos. Heck, just this week, Facebook-owned Instagram added video sharing, and it’s already popular. But what if you want to easily share a set of photos, videos, audio, and text in a single album? Reflexive relation Related terms[edit] A relation that is irreflexive, or anti-reflexive, is a binary relation on a set where no element is related to itself. An example is the "greater than" relation (x>y) on the real numbers. Note that not every relation which is not reflexive is irreflexive; it is possible to define relations where some elements are related to themselves but others are not related to themselves (i.e., neither all nor none). For example, the binary relation "the product of x and y is even" is reflexive on the set of even numbers, irreflexive on the set of odd numbers, and neither reflexive nor irreflexive on the set of natural numbers. A relation is called quasi-reflexive if every element that is related to some element is related to itself.

Pearltrees 2.0 Launches with a Brand New User Interface Today Pearltrees officially separated itself from its unique visual interface made of pearls and pearltrees, finally succumbing to the trend of Pinterest-like user experience. It might be more practical for the majority of users to sort and collect content with the new Pearltrees 2.0, however, some people might regret the innovative former interface that allowed to discover related content rapidly by browsing an “ocean” of Pearls. Users still have the possibility to go back to the “pearly” version accessible from the menu in the settings section. Online Landscape Evolves With S-Commerce - Direct Internet Catalogue - Retail Early adopters of Facebook commerce, or F-commerce, are dropping it like flies — but so what? Department stores such as Nordstrom and J.C. Penney recently shuttered F-commerce storefronts and ceased selling on the digital platform, but it doesn’t matter, experts contend, because the landscape has already shifted to social commerce, or s-commerce.

Pearltrees Raises $6.7M For Its “Collaborative Interest Graph” Pearltrees, a company offering a novel interface for sharing and finding content, has raised 5 million euros ($6.7 million US) in new funding. The basic unit of the Pearltrees service is the pearl, which is basically a bookmark. Users can assemble these pearls into trees based around a topic. Meanwhile, Pearltrees is using that data to determine how different topics and bookmarks are related, and allows users to find new pearls (related to whatever topic they’re exploring) through its “related interests” button. Following the lead from Google’s PageRank and Facebook’s EdgeRank, Pearltrees has named its technology TreeRank. In essence, it’s offering its own version of the “interest graph”, a goal that many startups are chasing.

New Bing Experiment Adds Curated Lists Of Links, Images And Videos From Experts To Search Results Microsoft today announced a new experiment for its Bing search engine that’s a bit different from the usual social search and algorithm updates we’ve come to expect from the service. Bing Boards, as this new effort is called, aims to create something akin to curated search results for a select group of searches. These lists, Microsoft says, “are visual collections of images, videos and links that tell a story from a unique point of view.” Currently, Microsoft is working with a small group of food and lifestyle bloggers, experts and “social influencers” to create these boards. If the experiment works out, the company plans to expand these offerings to other users and topics. For the time being, though, Microsoft isn’t saying how exactly its curators are creating these lists.

Antisymmetric relation if R(a,b) and R(b,a), then a = b, or, equivalently, if R(a,b) with a ≠ b, then R(b,a) must not hold. As a simple example, the divisibility order on the natural numbers is an antisymmetric relation. And what antisymmetry means here is that the only way each of two numbers can be divisible by the other is if the two are, in fact, the same number; equivalently, if n and m are distinct and n is a factor of m, then m cannot be a factor of n. In mathematical notation, this is: Pearltrees releases a new version, without any pearls nor trees The Paris-based startup founded in 2009 once declared: “We focus on the visual potential of Pearltrees to let people dive deeply into their interests and nearly feel them”. Their product, offering a digital curation tool, was unique because of the visual interface voluntareely original: links and folders symbolized by rounded pearls attached together like the branches of a tree. Today, pearls and trees have disappeared to make room for a brand new and larger organisation tool. Two years ago, everyone wanted to build products around “curation” and “interest graph”. Today the keywords have shifted to “collaborative SaaS tool” and “organizing data”. Pearltrees, who has raised €8,5 million in two rounds, is renewing itself to match the new trends by releasing a new version focused on organization of collections in a more “obvious” way.

Get inside their heads: 12 factors that impact whether customers click "buy" As I started to take notes, I was a bit startled to hear Amy’s opening question: “If you and I were alone in this room, how would you kill me?” A self-described usability specialist, Eight by Eight’s Amy Africa knows how to get one’s attention – but more importantly, what gets people to buy (and not). In the Shop.org First Look “Neuromarketing and the Influence on Buying Behavior” session at Retail’s BIG Show this week, Amy delved into what makes us tick – as human beings and as shoppers – which in turn are keys for retailers to entice customers to buy.

i agree with you s243a. my motivation to join pearltrees was not to import my bookmarks, but to have a useful and fun learning application. especially the web design developement content. of course, once hooked on pearltrees my motivations changed. i am an information junkie and a great place version 1 is for that addiction. haha. so yes, for me, the quality content of version 1's power curators definitely solidified my upgrade to premium membership. was that not a money hit for the power of quality curation and strickly in the version 1 format. and since then i have upgraded to a premium membership plan that allows me to offer premium membership to my husband, family, and friends if they choose. in my world that's called income generated via membership of quality curators . make sense? by ebbead Jun 2

This article gives some insight on what they mean by “democratize”. Essentially it suggests that they think that there may be more money in potential users than in their existing user base. The article claims that only 1% of people invest much time in curation. However. Isn’t there something to be said for quality content? Couldn’t quality content be a big driver of traffic for the site? by s243a Jun 1