Methods of Differentiation in the Classroom 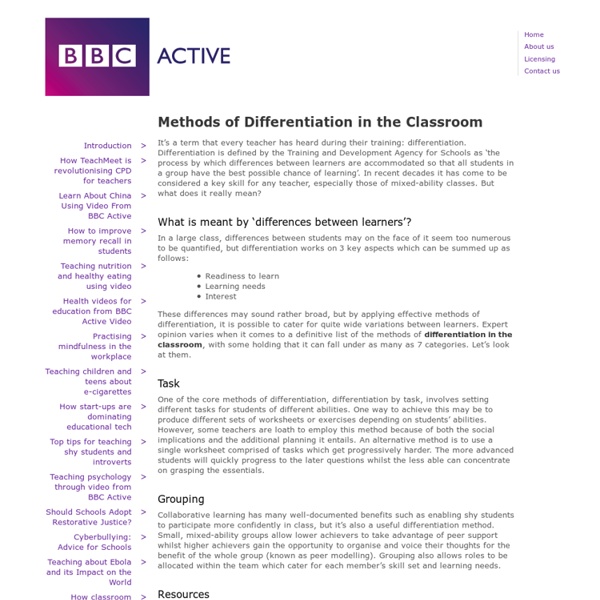 It’s a term that every teacher has heard during their training: differentiation. Differentiation is defined by the Training and Development Agency for Schools as ‘the process by which differences between learners are accommodated so that all students in a group have the best possible chance of learning’. In recent decades it has come to be considered a key skill for any teacher, especially those of mixed-ability classes. But what does it really mean? What is meant by ‘differences between learners’? In a large class, differences between students may on the face of it seem too numerous to be quantified, but differentiation works on 3 key aspects which can be summed up as follows: Readiness to learn Learning needs Interest These differences may sound rather broad, but by applying effective methods of differentiation, it is possible to cater for quite wide variations between learners. Task Grouping Resources Pace Outcome Dialogue and support Assessment

Curriculum differentiation - Schools Plus - The Department of Education Ideas on adjusting the curriculum to meet the needs of all students Schools Plus would like to acknowledge that the information listed below is a body of knowledge that has been collected from a variety of sources - teachers, workshops, classrooms and schools. Set achievable tasks providing regular feedback throughout the activity Teach the student to organize themselves by listing tasks to be done and when they are due.

Differentiation From Wikipedia, the free encyclopedia Differentiation may refer to: Science, technology, and mathematics[edit] Biology and medicine[edit] Geology[edit] Social sciences[edit] Other uses in science, technology, and mathematics[edit] In business[edit] See also[edit] Differentiation - Geoff PettyGeoff Petty Differentiation is the process by which differences between learners are accommodated so that all students in a group have the best possible chance of learning. We used to teach subjects and classes – now we teach students. In the Third Edition of ‘Teaching Today’ Geoff Petty (2004) there is an appendix which summarises differentiation strategies, each of which is explained in detail in the book. The downloads on the Active Learning Page of this website are also very relevant. The materials that can be downloaded from this page are principally for teacher trainers and staff trainers. Diff making it happen is for managers of teaching teams or senior managers. These materials are in draft form, and were used for an LSDA Train Trainers project on differentiation involving 75 UK colleges that I delivered with Carole Mitchel. There is a lot of material here, consider the poor trees!

Idea: Differentiation In Michael Porter's ground-breaking work on the competition of the firm he argued that there are only two ways for firms to compete: by charging a lower price, or by differentiating their products or services from those of their rivals. This differentiation can take real forms (soluble aspirin as against non-soluble aspirin, for example) or imaginary forms (by advertising that suggests one perfume makes you more attractive to the opposite sex than another). The value of differentiation increases the more that products come to resemble each other. For example, different brands of airline flight or latte vary less and less as time goes by. So it becomes a bigger and bigger challenge to differentiate one from another. Once a clear distinction has been established, however, it can be reaffirmed for years and years. In consumer-goods industries it is common for a large number of differentiated products to be produced by a small number of firms. Further reading More management ideas

10 Best TED Talks of 2014 for Educators TED Talks are a major source of inspiration for educators who need a morale boost, a discussion starter, or a new perspective. The year 2014 brought some of the best TED Talks for educators, but there are some not-to-be-missed talks from 2013 that still are highly relevant for educators today. Their messages are invaluable for educators who work tirelessly to inspire creativity, motivation, and determination in their students. The Danger of Silence Poet and teacher Clint Smith encourages viewers to speak up against ignorance and injustice. Why Lunch Ladies are Heroes Children’s book author Jarrett Krosoczka focuses on lunch ladies in his graphic novels and his TED Talk. My Daughter, Malala Malala Yousafzai was shot in the head by a Taliban gunman for advocating for girls’ education in Pakistan, and recently became the youngest Nobel Prize recipient in history. Embrace the Near Win Success, Failure, and the Drive to Keep Creating Teach Teachers how to Create Magic Every Kid Needs a Champion

A Teacher's Guide to Differentiating Instruction Introduction Does effectively teaching 30 students in one classroom require teachers to develop 30 lessons, one tailor-made for each student? Or should teachers “aim for the middle” and hope to reach most students in a given lesson? The answer is not simple. While most would agree it is impractical to try to individualize every lesson for every child, research has shown that teaching to the middle is ineffective. It ignores the needs of advanced students, often leaving them unchallenged and bored, while it intimidates and confuses lower functioning learners. What is Differentiation? Simply stated, differentiation is modified instruction that helps students with diverse academic needs and learning styles master the same challenging academic content. How to Start Four planning steps set the stage for effective differentiated instruction. Vary Materials Nonfiction and fiction, written at a variety of reading levels. Vary Process Vary Assessment Conclusion References Good, M. View Full Article

Cell Differentiation | Ask A Biologist In order for cells to become whole organisms, they must divide and differentiate. Cells divide all the time. That means that just one cell, a fertilized egg, is able to become the trillions of cells that make up your body, just by dividing. Those trillions of cells are not all the same though. Just a little while after you started out as a fertilized egg, your cells started performing specific tasks, even started to look different because of that. The example of this is your lung cells and your brain cells. Scientists still do not understand perfectly why cells in the same organism decide to differentiate. Scientists thought that new, fresh cells would differentiate, like a fertilized egg would.

What Is Differentiated Instruction? Click the "References" link above to hide these references. Csikszentmihalyi, M. (1997). Finding Flow: The Psychology of Engagement with Everyday Life. New York: Basic Books. Danielson, C. (1996). Sternberg, R. Tomlinson, C. (1995). Tomlinson, C. (1999). Vygotsky, L. (1986). Winebrenner, S. (1992). Harvard Education Publishing Group - Home Last year, when Sherryl Hauser, a third-year math teacher, had to plan a project to develop her teaching, it was an easy choice: differentiated instruction. “One of the reasons I picked differentiating is that I kept trying it and it kept failing,” she says. It wasn’t as if she didn’t understand the concept. Hauser had coauthored an article, “Constructing Complexity for Differentiated Learning,” in the August 2009 issue of Mathematics Teaching in the Middle School. But in going from preservice grad student to full-time teacher at Sage Park Middle School in Windsor, Conn., Hauser saw a gap between theory and practice. Suddenly, “tiering”—or varying the difficulty of work for students based on readiness—had a twist: Kids didn’t like it when a classmate’s paper looked a lot different or had more problems on it. This method is best embodied in the work of Carol Ann Tomlinson, whose books, videos, and DVD have been embraced by many school districts and professional developers.

The How To's of Planning Lessons Differentiated by Learning Profile Figure 10.1. Focus on Learning Profile Learning-Style Preferences Learning style refers to environmental or personal factors. Some students may learn best when they can move around, others need to sit still. Intelligence Preferences Intelligence preference refers to the sorts of brain-based predispositions we all have for learning. Culture-Influenced Preferences Culture affects how we learn, as well. The goal of the teacher is, therefore, not to suggest that individuals from a particular culture ought to learn in a particular way, but rather to come to understand the great range of learning preferences that will exist in any group of people and to create a classroom flexible enough to invite individuals to work in ways they find most productive. Gender-Based Preferences Gender also influences how we learn. Combined Preferences Combinations of culture and gender will create unique constellations of learning preferences in individuals. Some Guidelines for Learning-Profile Differentiation 4-MAT.