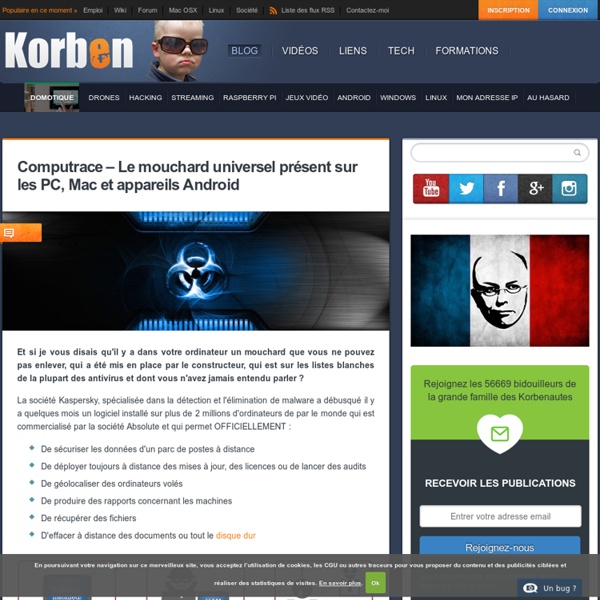 Cyber security road map for businesses Criminal hacking is making headlines with depressing frequency these days, so the task of securing your business against cyber criminals can seem daunting, particularly if your business is of modest size, the kind of place that does not have a crack team of cyber security experts on staff. This blog post offers some basic advice on cyber security survival along with links to free resources that can be useful in your efforts to defend your business. There are also a couple of podcasts about this road map. You can listen to the first one here. The second one will be published here. How to fix limited or no connectivity Wi-Fi issues in Windows 8 What happens when Windows 8 or 8.1 shows the following arcane message whenever you try to connect to your wireless network: This connection has limited or no connectivity. No internet access Or maybe you’ve seen this laconic message: The connection is limited

How to build the best free PC security suite Editor's note: This article was updated in full in January 2016. If you have a PC, you’re a target. You need security software. Online tools - WOT Wiki Useful freeware and other online tools.A more detailed list of freeware may be found at: gizmo's freeware such as this article, Probably the Best Free Security List in the World Free online single file scanning Test your server for Heartbleed (CVE-2014-0160) If there are problems, head to the FAQ Results are now cached globally for up to 6 hours. Enter a URL or a hostname to test the server for CVE-2014-0160. How to encrypt everything on Windows, OS X, iOS, and Android The FBI’s inability to crack a terrorist’s iPhone 5c shows the strong protection you can get for your private information on a mobile device. That same encryption is also available on your computer, at least in some cases. Given the increasing access to personal and corporate data sought by the U.S. government, as well as by other politicians, unscrupulous businesses, and criminal hackers, people should up their game on what they protect.

Know Your Enemy: Fast-Flux Service Networks An Ever Changing Enemy Primary Authors: William Salusky Robert Danford Last Modified: 13 July, 2007 One of the most active threats we face today on the Internet is cyber-crime. Increasingly capable criminals are constantly developing more sophisticated means of profiting from online criminal activity. This paper demonstrates a growing, sophisticated technique called fast-flux service networks which we are seeing increasingly used in the wild. Fast-flux service networks are a network of compromised computer systems with public DNS records that are constantly changing, in some cases every few minutes. Critical crypto bug in OpenSSL opens two-thirds of the Web to eavesdropping For a more detailed analysis of this catastrophic bug, see this update, which went live about 18 hours after Ars published this initial post. Researchers have discovered an extremely critical defect in the cryptographic software library an estimated two-thirds of Web servers use to identify themselves to end users and prevent the eavesdropping of passwords, banking credentials, and other sensitive data. The warning about the bug in OpenSSL coincided with the release of version 1.0.1g of the open-source program, which is the default cryptographic library used in the Apache and nginx Web server applications, as well as a wide variety of operating systems and e-mail and instant-messaging clients. The bug, which has resided in production versions of OpenSSL for more than two years, could make it possible for people to recover the private encryption key at the heart of the digital certificates used to authenticate Internet servers and to encrypt data traveling between them and end users.

Jigsaw crypto-ransomware deletes more files the longer you delay paying Understanding how to buy bitcoins and pay ransomware authors for decryption keys is hard enough, yet some cybercriminals now expect their victims to do it in under an hour if they want all of their files back. A new ransomware program dubbed Jigsaw encrypts users' files and then begins to progressively delete them until the victim pays the equivalent of $150 in Bitcoin cryptocurrency. The ransomware deletes one file after the first hour has passed and then increases the number of files it deletes in every 60-minutes cycle. If no payment has been made within 72 hours, all remaining files will be deleted. "Try anything funny and the computer has several safety measures to delete your files," the program's creators warn in their ransom message that's accompanied by a picture of the Jigsaw killer's mask from the horror film series Saw. That's not an idle threat.