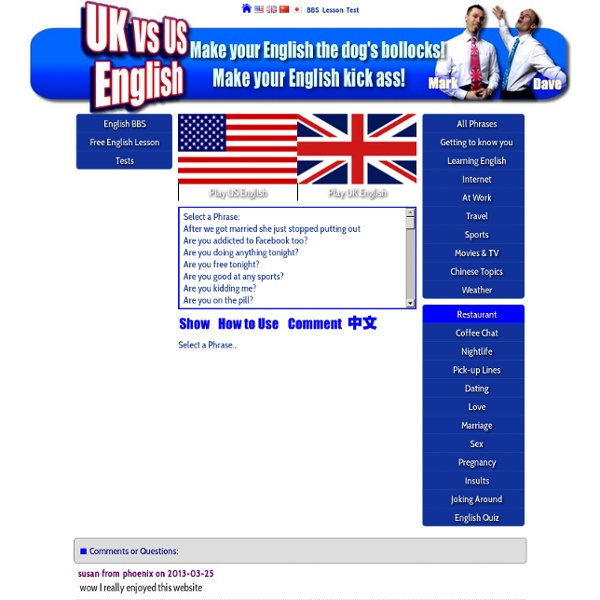 Pronunciation Welcome to EnglishClub Pronunciation for ESL learners. If your questions about pronunciation are not answered here, feel free to ask a question at the Help Each Other With English forum. pronunciation (noun): the way in which we pronounce a wordpronounce (verb): to make the sound of a word What is Pronunciation? English is not Phonetic Always remember that English is not "phonetic". Glossary of Pronunciation TermsDefinitions of words and expressions used when talking about pronunciation Printable Phonemic Chart The symbols on this chart represent the 44 sounds used in British English speech. Interactive Phonemic Chart Click to hear each symbol and sample word. Pronouncing The AlphabetListen to how we say the letters of the alphabet; and learn how to pronounce them correctly. Improve your pronunciation on MyEC Join the Audio Speaking Group on MyEnglishClub and practise reciting our weekly podcasts. Word Stress in English with QuizThe secret key to English pronunciation! Homophones What is it?

World Wide Words Differences Between American and British English By Kenneth Beare While there are certainly many more varieties of English, American English and British English are the two varieties that are taught in most ESL/EFL programs. Generally, it is agreed that no one version is "correct" however, there are certainly preferences in use. Pronunciation - differences in both vowel and consonants, as well as stress and intonation Vocabulary - differences in nouns and verbs, especially phrasal verb usage Spelling - differences are generally found in certain prefix and suffix forms The most important rule of thumb is to try to be consistent in your usage. Use of the Present Perfect continue reading below our video Loaded: 0% Progress: 0% In British English the present perfect is used to express an action that has occurred in the recent past that has an effect on the present moment. I've lost my key. In British English the above would be considered incorrect. British English: American English: Possession Do you have a car? She's got a beautiful new home.

Introduction to Coordinate Graphing Introduce elementary students to coordinate graphing through seasonal coloring activities. The fall Jack-O-Lantern activity requires students to use the grid code and crayons or markers to create a jack-o-lantern on a blank 9x9 grid. The use of letters on the horizontal axis and numbers on the vertical axis introduces young students to coordinate pairs without the confusion of the standard (h,v) format. Notice that it is important that elementary students become accustomed to listing the horizontal coordinate first as this will transfer to the Cartesian coordinates they will use in later grades. Download the Mathwire Jack-o-Lantern graphing activity. Download the Mathwire Mad Monster graphing activity.

Sounds: The Pronunciation App Practise, practise, practise! Work how you want to work – practise listening, reading, speaking and writing. Interactive phonemic chart Tap on a symbol to hear the sound, or tap and hold to hear an example word. Vocabulary Wordlists Look up and listen to over 650 words in the Wordlist, then record and compare your own pronunciation. British Slang If you’re planning on visiting London in the future, you might just want to familiarise yourself with some British Slang expressions that are very commonly used by the British. They will be very useful particularly if you’re likely to be socialising with Londoners. 1. “Mind The Gap” This famous expression is always used on trains and the London Underground (Tube). 2. “Mate” is British Slang used to refer to men. 3. If something is “naff”, it is very uncool. 4. This British Slang word is not to be confused with the film of the same title where the main characters removed all their clothes for a striptease act. 5. The literal meaning is larva, but it is also another word for food. 6. “I love Pringle Crisps. 7. When the English don’t like something, but don’t want to be rude they will say: ” I’m afraid that going to nightclubs is not my cup of tea”. 8. This is another British slang word for the UK currency, the pound. 9. 10. This basically means ‘thank you’. Ciao for now. Shanthi

Speaking Activities On these pages you will find ideas for classsroom activities which involve speaking. (These tips are taken on this site · Find the murderer · Bingo mingle · Short projects to get them talking - Lists · Superlative questions · Summer destinations · Interview the experts · Discussion bingo · Mini-talks · Erase the dialogue · Fun discussion of controversial topics · Motivating speaking activities · Third conditional guessing game · Preposition basketball · Running dictation · Simple picture activity · ARM exercises · Doctors and patients · Nursery rhyme role-play Find the murderer Jacqueline Francois, France Speaking and listening activity Level: Intermediate or advanced Target language: Past continuous · 1. · 2. · 3. · Option (a) Tell the students they are free to invent a story why she is dead, and how, they can choose their own personalities and alibis, and decide who will be the inspector as he or she has to prepare a few questions to ask the suspects. · 4. · 5. · 6. a.

Diction Exercises - Tongue Twisters to Learn How to Speak Clearly - articulation drills to make sure they get your message Why should you do diction exercises? Because your speech content may be great, you may look fantastic but unless your audience can UNDERSTAND what you're saying, your message is lost. 697Save Diction exercises will help you learn how to speak clearly. An athlete does warm-ups and stretches before an event: a singer does likewise. These drills are the speaker's warm-up equivalent. The benefits of diction/articulation exercises or drills are: strengthening and stretching the muscles involved in speech bringing to your attention habitual speech patterns which may be less than perfect. Good diction is NOT about changing your accent or making you 'talk posh'. The most commonly known and used diction exercises are Tongue Twisters. There are literally squillions of them, each focusing on either a single letter, or a letter combination. Tongue twisters have long been an integral part of a public speaker's tool kit. Bill had a billboard.

Kid Conversation Starters - All Pro Dad : All Pro Dad Sometimes being a dad is just tough. I recently had a real talk with my 8-year-old son about a kid who was trying to bully him. I don’t know if my advice was the best, but I believe it opened the door for deeper conversations in the future. You may be there, too. The time for a difficult conversation may be now. It could be the “birds and the bees” or it could be about hanging out with the wrong crew. When are you (or have been) most afraid? Click to download our printable version.