How Many of These 51 Spiritual Awakening Symptoms do YOU Have? 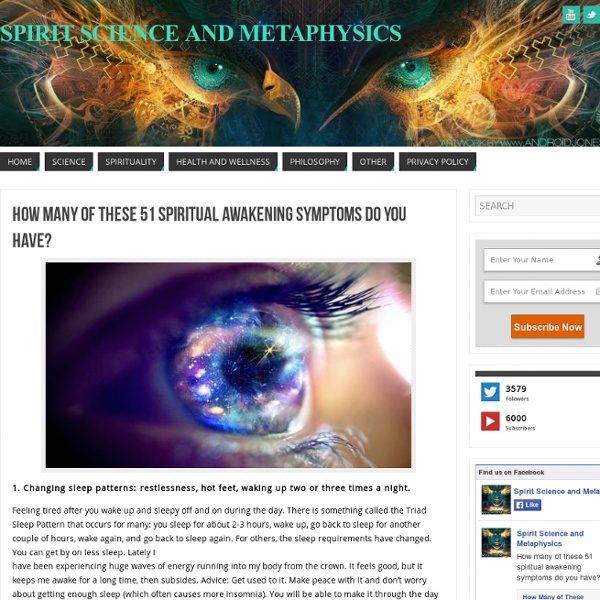 1. Changing sleep patterns: restlessness, hot feet, waking up two or three times a night. Feeling tired after you wake up and sleepy off and on during the day. 2. Advice: This is nothing to be alarmed about. 3. Advice: Accept your feelings as they come up and let them go. 4. Advice: Same as #3. 5. Advice: Don’t freak out, but just accept it as a symptom of where you are right now. 6. Advice: Don’t deny what your body tells you it needs. 7. Advice: An acupuncturist told me that this film can be removed by sloshing 2 tablespoons of cold-pressed olive oil in your mouth for 10-15 minutes (don’t swallow, whatever you do), then spitting it out into the toilet — not the sink, for you just removed toxins from your body and don’t want them in the sink. 8. 8a. Advice:Your vision is changing in many ways — you are experiencing new ways of seeing. 8b. Advice: Surrender to it. 8c. 9. Advice: You may be sloughing off toxins and bringing emotions to the surface. 10. 11. 12. 13. 14. 15. 16. 17. 18. Related:  in between two worlds

Anesthesia points to deeper level 'quantum channels' as origins of consciousness Oil and water don’t mix. Can that simple fact explain consciousness? In a special issue of Current Topics in Medicinal Chemistry scientists from Nova Southeastern University, the University of Alberta and the University of Arizona find evidence that anesthetics act to prevent consciousness in non-polar, oil-like ‘quantum channels’ deep inside proteins, deep inside brain neurons. Anesthetic gas molecules selectively prevent consciousness, sparing non-conscious brain activities. After decades of inconclusive study of membrane receptor proteins, evidence for anesthetic action now points instead to a deeper level inside neurons, in non-polar regions inside the protein walls of cytoskeletal microtubules. Microtubules are protein lattice polymers which organize neuronal interiors and regulate synapses. In the present study, the team modeled dipole-coupled oscillations between benzene ring pi resonance clouds and found intrinsic coherence at a frequency of 68 Terahertz (68 x 1015 Hz).

3-Year-Old Remembers Past Life, Identifies Murderer and Location of Body | Paranormal (Before It's News) From The Epoch Times: A 3-year-old boy in the Golan Heights region near the border of Syria and Israel said he was murdered with an axe in his previous life. He showed village elders where the murderer buried his body, and sure enough they found a man’s skeleton there. He also showed the elders where the murder weapon was found, and upon digging, they did indeed find an axe there. In his book, “Children Who Have Lived Before: Reincarnation Today,” German therapist Trutz Hardo tells this boy’s story, along with other stories of children who seem to remember their past lives with verified accuracy. The boy was of the Druze ethnic group, and in his culture the existence of reincarnation is accepted as fact. He was born with a long, red birthmark on his head. It is customary for elders to take a child at the age of 3 to the home of his previous life if he remembers it. The boy also remembered the full name of his killer. Source: EPOCH TIMES

Why People Fail to See The Aura and How to Learn to See It digg HJ: Learning to see the Aura is like riding a bike — it takes skill and practice that is developed through trial and error. It may be a bit more frustrating and slightly less exhilarating, but certainly no less useful. Imagine being able to get an instant visual read on anyone or anything that comes into your field of view — after learning to understand what the various colors and patterns represented, it would open up an entirely new field of perception that could be highly useful for any number of things. Although we all have the ability, very few learn to use it in any significant way, which is an interesting reflection. - Truth Easy New Way to See Auras By Robert Bruce | Astral Dynamics All colours have a uniquely coloured aura of their own that are of a completely different colour. You can, in the early stages of learning to see auras, cause an after image that is still seen when you look away. The way the aura builds up is totally unlike the way an after image appears. 1. 2. 3.

Mind-Reading Computer Writes Words with Brain Waves Imagine a world in which authors can write books in days, not months, using only the power of their minds. This hands-free future could be around the corner: scientists have created software that hooks up to your brainwaves and transcribes whatever you're thinking. Brain-to-Text is the software behind this futuristic, sci-fi-style concept. It has the potential to transform the lives of those who have lost the ability to communicate effectively. The study designed to test this new concept, published in Frontiers of Neuroscience, required participants who already had electrodes fitted in their brains. This limited the number of people who could participate in the trial to seven, all of whom suffered from epilepsy and already had electrodes implanted in their brain to treat it. With no way around this limitation, the participants were asked to read different passages of text aloud while their neural data was read by a computer. The results were encouraging. [H/T: Popsci]

1500 Year Old Bible Claims Jesus Christ Was Not Crucified – Vatican In Awe Much to the dismay of the Vatican, an approx. 1500-2000 year old bible was found in Turkey, in the Ethnography Museum of Ankara. Discovered and kept secret in the year 2000, the book contains the Gospel of Barnabas – a disciple of Christ – which shows that Jesus was not crucified, nor was he the son of God, but a Prophet. The book also calls Apostle Paul “The Impostor”. The book also claims that Jesus ascended to heaven alive, and that Judas Iscariot was crucified in his place. A report by The National Turk says that the Bible was seized from a gang of smugglers in a Mediterranean-area operation. Authenticity According to reports, experts and religious authorities in Tehram insist that the book is original. The text maintains a vision similar to Islam, contradicting the New Testament’s teachings of Christianity. The Catholic Church wants in What does this mean to Christian-derived religions and their followers? What does this mean to atheists/agnostics/secular thinkers?

Are Higher Vibrations Making You Sick? Integrating the Energetic Shift By Nanice Ellis Contributing Writer for Wake Up World Have you considered that an illness or emotional issue may be the result of an energetic overload? It is no secret that human consciousness and the consciousness of the planet are going through monumental shifts. This higher vibration energy will ultimately help us to heal many of the issues that we are now experiencing in our lives and in the world, but this energy is also responsible for creating other challenges that we may also be facing. Symptoms of energetic overload commonly include: anxiety, headaches, body aches, backache, depression, emotional issues, confusion, injury, shaking, sleep issues, energy surges, even neurological issues – and any acute or chronic illness may be (at least partly) the result of an energetic overload. There are many explanations of this influx of higher vibration energy, and why it is coming now. Integrating the Higher Vibration 1. 2. The body does not lie. If You Have an Energy Block or Overload…

Scientists Prove DNA Can Be Reprogrammed by Words and Frequencies THE HUMAN DNA IS A BIOLOGICAL INTERNET and superior in many aspects to the artificial one. Russian scientific research directly or indirectly explains phenomena such as clairvoyance, intuition, spontaneous and remote acts of healing, self healing, affirmation techniques, unusual light/auras around people (namely spiritual masters), mind’s influence on weather patterns and much more. In addition, there is evidence for a whole new type of medicine in which DNA can be influenced and reprogrammed by words and frequencies WITHOUT cutting out and replacing single genes. Only 10% of our DNA is being used for building proteins. This finally and scientifically explains why affirmations, autogenous training, hypnosis and the like can have such strong effects on humans and their bodies. Garjajev’s research group succeeded in proving that with this method chromosomes damaged by x-rays for example can be repaired. . Source