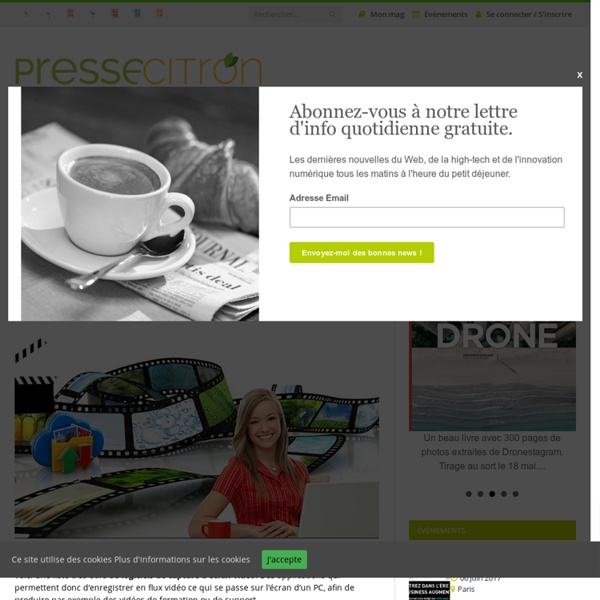 Wink - [Homepage] Here is a sample Flash tutorial created by Wink. Click the green arrow button to start viewing it. --------> This is a good example of how you can create tutorials in Wink, by capturing screenshots, mouse movements and specifying your own explanations with them. 50 Must-Read IT Blogs 2012 When we kicked off our list of 50 Must-Read IT Blogs last year, we knew we were onto something special. We scoured the web and read many blogs before we settled on our 50 for the year, but we came away with a deep respect for the abundance of thoughtful content being generated by the collective small business and IT communities. This year, we decided to invite our readers to throw their suggestions into the ring as well. Jing - Capture d'images et de vidéos How Jing saved me 20 hours and 10 gallons of gas this week I specialize in online marketing for home builders and we frequently work with sales teams to migrate their registration cards to an online CRM model. Since our clients are in diverse locations, I needed a way to train agents on the technology without spending a lot of time on the road.

UltraVnc screen recorder: Free demo creation software What's the difference with other screen recorders There exist a lot of screen recorders, but all lack the speed for doing some full screen recording. The speed is just to low or cpu to high. Free Google+ And Twitter Marketing Metric Tools So you’ve got what you think is a relatively successful social media campaign going – but how do you know? What statistics do you go by? Simply having a large number of “followers” or “likes” whilst nice, is not necessarily enough. For example, Lady Gaga has just under 33 million followers on Twitter so does that make her infinitely stronger than Apple who have NO followers (well perhaps that’s due to them not having a twitter page but you get my point)? Not only must you have an audience, but you must also communicate and stimulate conversation on your pages to achieve true social media success. This can be difficult to measure on Twitter, Google+ et al. as they surprisingly fail to provide these statistics and tools by default.

eduGate, LMS, Learning Management System Capture Fox Movie is a Firefox add-on and a handy tool to create tutorials about a software, a web site or anything that can be displayed on your computer. It records your screen frame by frame. You can also record your voice. Features Capture screen, record your sound and get an AVI (movie) file. Selling to the Four Temperament Styles Have you ever wondered why you seem to hit it off right away with some people, while with others it’s more like oil and water? A person’s temperament style not only determines his or her energy level, behavioral traits, body language patterns, and buying style, but it also influences compatibility with other people. Yin Yang, the ancient Chinese symbol for balance, depicts the strong attraction and complementary nature of opposites. Just as oil and water repel, while magnet and metal attract, we too are attracted or repelled by other people instinctively.

How to Brand Your Blog's Social Shares Icons by Iconify.it This tip may seem like an unnecessary piece of housekeeping. “Branding my Tweets? Who has time for that?” But the results can be extremely helpful to growing your site, and it’s really easy to do. Screen Video Recorder Screen Video Recorder allows you to record all screen or part of the screen and audio activity on your computer and create standard AVI video files using installed codecs. It's free! Some ways you can use this software:

More choice from cloud computing applications AN INCREASING number of cloud applications and services are trickling into the market, in many cases from non-traditional IT players. Andy Brauer, chief technology officer at Business Connexion, says the likes of Google and Amazon provide tools that enable information to be extracted from social networking sites about what customers are saying about their products and services and blend it with business intelligence they are gathering from their internal systems. He says technology is becoming available that can interrogate the content of video footage, which was not previously possible, and YouTube provides this functionality.

DuckLink - Design Software DuckCapture: simple and ease-to-use screen capture tool Read More Review about DuckCapture by FindMySoft.com DuckCapture comes with four capture modes that make screen capture easy! Capture a window on your screen, region of your screen, or the contents of a tall web page that scrolls. You can easily edit, and share a screenshot. Flipboard launches custom curation tools, wants to unleash your inner magazine editor Flipboard has carved out a niche as one of the leading news and content-consumption apps for mobile devices like smartphones and tablets, with its digital-magazine look and easy user interface. Now the company wants to turn all of those content consumers into publishers as well: a new version of the app will be released today that gives users the tools to create their own topic-specific magazines. It’s a little like Pinterest merged with Tumblr, crossed with a better-looking and more social version of Google Reader.