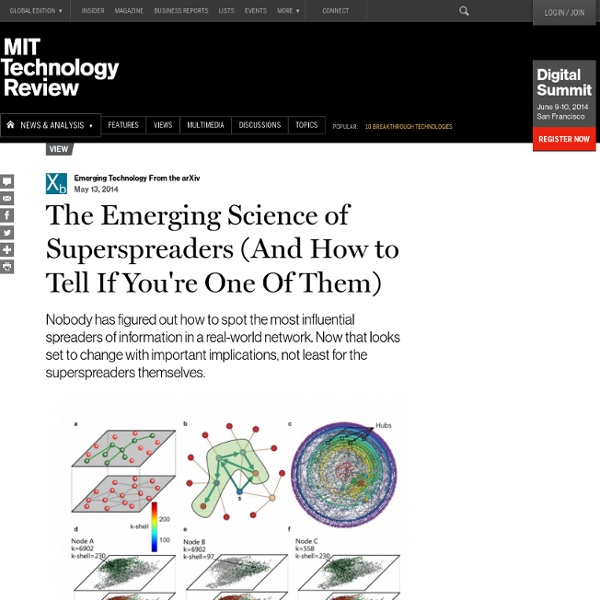 Who are the most influential spreaders of information on a network? That’s a question that marketers, bloggers, news services and even governments would like answered. Not least because the answer could provide ways to promote products quickly, to boost the popularity of political parties above their rivals and to seed the rapid spread of news and opinions. So it’s not surprising that network theorists have spent some time thinking about how best to identify these people and to check how the information they receive might spread around a network. But there’s a problem. But there is growing evidence that information does not spread through real networks in the same way as it does through these idealised ones. So the question of how to find the superspreaders remains open. In the past, network scientists have developed a number of mathematical tests to measure the influence that individuals have on the spread of information through a network. Related:  Social Network Systems

The Best Length for Online Content 18.7K Flares Filament.io 18.7K Flares × Every so often when I’m tweeting or emailing, I’ll think: Should I really be writing so much? I tend to get carried away. And for the times that I do, it sure would be nice to know if all this extra typing is hurting or helping my cause. Curious, I dug around and found some answers for the ideal lengths of tweets and titles and everything in between. The ideal length of a tweet is 100 characters Whom should you trust when it comes to advice on the ideal length of a tweet? Twitter’s best practices reference research by Buddy Media about tweet length: 100 characters is the engagement sweet spot for a tweet. Creativity loves constraints and simplicity is at our core. The Buddy Media research falls in line with similar research by Track Social in a study of 100 well-known brands that are popular on Twitter. Their analysis saw a spike in retweets among those in the 71-100 character range—so-called “medium” length tweets. Demian’s advice goes even deeper.

Diamond Teleporters Herald New Era of Quantum Routing The prospect of a quantum Internet has excited physicists for two decades. A quantum Internet will allow the transmission of information around the world with perfect security and make cloud-based quantum computing a reality. But first, physicists must perfect the technology of quantum routing—the ability to receive and transmit quantum information without destroying it. That’s a significant challenge. The key is a technique called quantum teleportation, which transmits information from one point to another without it passing through the space in between. Today, Wolfgang Pfaff at the Kavli Institute of Nanoscience Delft in the Netherlands and a few pals say they’ve take a significant step toward this goal with the first demonstration of diamond teleporters that can act as nodes in a quantum network. The fundamental difficulty in quantum routing is that quantum information is fragile stuff. However, the process of measurement destroys quantum information.

Here are 89 Life Hacks That Will Make Your New Year So Much Better As you go into the New Year, remember that things can be better than previous years. Maybe you'll get a raise, date someone new or even adopt an adorable pet to welcome into your family. But, if you fail at all of those things (sorry, if you do, but the chances are you may), here are life hacks that you can use to make your 2014 a lot better. Facebook feelings are contagious: Study examines how emotions spread online You can’t catch a cold from a friend online. But can you catch a mood? It would seem so, according to new research from the University of California, San Diego. Published in PLOS ONE, the study analyzes over a billion anonymized status updates among more than 100 million users of Facebook in the United States. “Our study suggests that people are not just choosing other people like themselves to associate with but actually causing their friends’ emotional expressions to change,” said lead author James Fowler, professor of political science in the Division of Social Sciences and of medical genetics in the School of Medicine at UC San Diego. There is abundant scientific literature on how emotion can spread among people – through direct contact, in person – not only among friends but also among strangers or near-strangers. Fowler worked on the study with Lorenzo Coviello – a PhD student in the electrical and computer engineering department of the UC San Diego Jacobs School of Engineering.

US Military Scientists Solve the Fundamental Problem of Viral Marketing Viral messages begin life by infecting a few individuals and then start to spread across a network. The most infectious end up contaminating more or less everybody. Just how and why this happens is the subject of much study and debate. Network scientists know that key factors are the rate at which people become infected, the “connectedness” of the network and how the seed group of individuals, who first become infected, are linked to the rest. It is this seed group that fascinates everybody from marketers wanting to sell Viagra to epidemiologists wanting to study the spread of HIV. So a way of finding seed groups in a given social network would surely be a useful trick, not to mention a valuable one. These guys have found a way to identify a seed group that, when infected, can spread a message across an entire network. Their method is relatively straightforward. This process finishes when there is nobody left in the network who has more friends than the threshold. Expect to hear more!

Social Network Analysis Brief Description: "Social network analysis is the mapping and measuring of relationships and flows between people, groups, organisations, computers or other information/knowledge processing entities." (Valdis Krebs, 2002). Social Network Analysis (SNA) is a method for visualizing our people and connection power, leading us to identify how we can best interact to share knowledge. History: When to use: Visualize relationships within and outside of the organization.Facilitate identification of who knows who and who might know what - teams and individuals playing central roles - thought leaders, key knowledge brokers, experts, etc.Identify isolated teams or individuals and knowledge bottlenecks.Strategically work to improve knowledge flows.Accelerate the flow of knowledge and information across functional and organisational boundaries.Improve the effectiveness of formal and informal communication channels.Raise awareness of the importance of informal networks. How to use: Training on SNA Tags

The boring truth of democracy: We all have to get involved One of the things that baffles mere mortals about the 2008 financial crisis is that no one seems to have been held accountable for what went on. Sure, there’ve been a few public mea culpas, and sure, multimillion-dollar fines have been paid. But actual admissions of guilt? That in turn, of course, begs the question of whether anything has actually changed in the past six years. The joke, it seems, is on us. Black points to a model from a different time, the Savings & Loan crisis of the 1980s. So really, it’s all pretty simple if totally depressing. Photo: Quinn Dombowski.