170 Ways To Use Word Clouds In Every Classroom 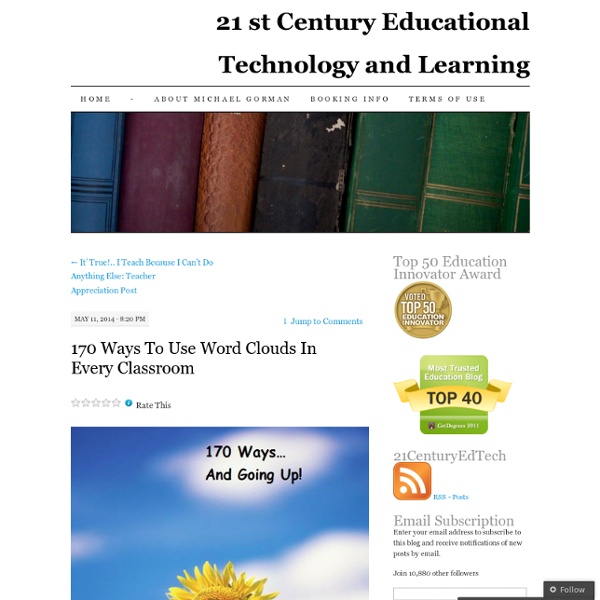 Welcome to a post I always have fun writing. Last year I attempted finding ways to use Word Clouds (Wordle) in education. When I concluded writing that post I was at 108 possible ways. More than a half year went by, and I was up to 125 ways to use Word Clouds in the classroom. I am so proud that this post now includes 170 ways. I was able to put together this list because of you and a lot of reflection. Booking Info – Are you looking for a practical and affordable professional development workshop for your school or conference? 170 Ways to Use Word Clouds in the Classroom - by Michael Gorman at ( Once again, I am amazed every time I talk to groups and find out so many educators have not used word clouds with their students. This is an update I promised from my previous 125 ways to use word clouds. All Subjects Put your lesson plan into a word cloud to create a word cloud of what you will be learning about. Science Language Arts Social Studies Math

Excelsior College To Integrate Game-Based Learning in 5 Courses -- Campus Technology Gaming Excelsior College To Integrate Game-Based Learning in 5 Courses By Dian Schaffhauser09/09/15 Excelsior College will integrate gaming and advanced simulation in five of its courses over the next year. It is one of the first steps in an initiative to integrate game-based learning across its entire curriculum. Muzzy Lane, a company that creates game-based tools, will partner with the college on the project that is one of the first initiatives of the college's new Center for Game and Simulation-Based Learning. "Games have shown the potential to transform learners from passive, disinterested knowledge consumers into intrinsically motivated knowledge producers," said David Seelow, director of the Center for Game and Simulation-Based Learning. The new game-based initiative will be used in a required course in the master of public administration program and electives in business and technology, health sciences and liberal arts. About the Author

Research Suggests Students Learn More When Working Together in Virtual Reality Games -- Campus Technology Gaming Research Suggests Students Learn More When Working Together in Virtual Reality Games With the help of a virtual reality game their professor created, some students at Cornell University have gathered evidence that interacting with other people in a game-playing atmosphere may help them learn more. Using a language-learning game, "Crystalize," created by Cornell Assistant Professor of Computer Science Erik Andersen, a group of students conducted a study with two different groups in which players, using an avatar, take a virtual tour of Japan. In the game, which is intended to help students learn Japanese — although it is designed to teach other languages as well — players go on "quests" to learn new words by watching game characters talk to each other. For instance, as one character walks away, another that is left behind says, "Sayonara." Naturally, players collect points by completing quests, as is so often the case in role-playing games. About the Author

Game-based e-learning: The next level of staff training Combining the convenience of online learning with just plain fun adds a new dimension to staff training E-learning is taking hold in popularity in many fields, including long-term care. However, Fortune 500 companies, to take one prominent example, are discovering that e-learning is often simply “e-boring.” “Companies in the U.S. spend about $60 billion a year on training their employees, but there's a good chance much of that is wasted. One of the challenges with e-learning, or online learning as it's also called, is that programmers, not educators, have too often been at the controls. E-learning, like any other learning, is most effective when designed and executed by educators and experienced trainers who understand learner motivation, both intrinsic and extrinsic. Cutting-edge e-learning is not about simply using technology to replace traditional methods, as in the online learning approach that is focused only on content. Retention rates: game-based vs. traditional training

Serious Games with Coventry University Coventry University, based in the UK, is well known as a top research institution. So, it is not surprising that they are leading the way in gamification across Europe and beyond. Two niche research areas stand out as beacons of innovation in online learning, their Serious Games Institute and Disruptive Media Learning Lab. With a highly collaborative nature and extensive partnerships across the globe, both organizations have been highly successful in procuring grant monies. As a result, they have produced some outstanding tools and resources. The Serious Games Institute (SGI), an operating division of Coventry University, is an international center for excellence with a focus on serious games applied research, business engagement and study. nsive targeting numerous fields. SGI received ERASMUS funding and two EU Commission Horizon 2020 Research and Innovation Action (H2020) grants looking at pervasive gaming and learning. One impressive game addresses language learning.

Erasmus+ Playing for Real Overview This project responds to the need for new horizons for re-engaging and re-mobilizing hard-to-reach adults in long-term unemployment situations. Funded by EU Erasmus +, the consortium with 10 partners (practice and knowledge partners) aims to provide a new way to engage such a vulnerable group with capacity building. Project Timeline: Updates The project has currently ended. Official website: PlayingForReal.eu See reflections here