All is not lost 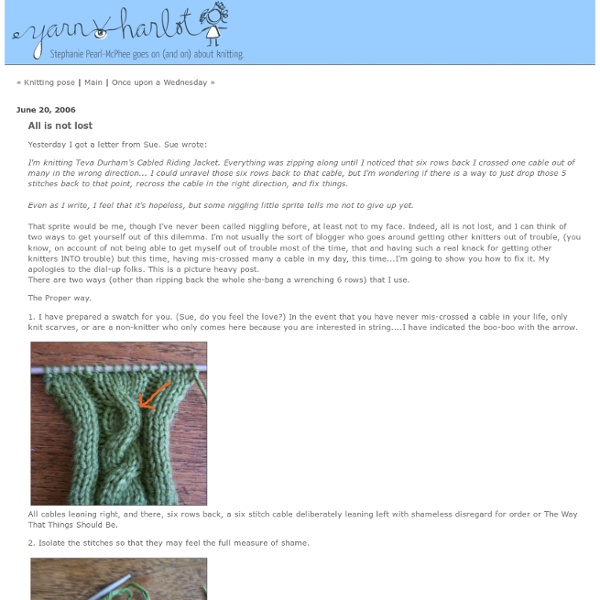 All is not lost Yesterday I got a letter from Sue. Sue wrote: I'm knitting Teva Durham's Cabled Riding Jacket. Everything was zipping along until I noticed that six rows back I crossed one cable out of many in the wrong direction... Even as I write, I feel that it's hopeless, but some niggling little sprite tells me not to give up yet. That sprite would be me, though I've never been called niggling before, at least not to my face. The Proper way. 1. All cables leaning right, and there, six rows back, a six stitch cable deliberately leaning left with shameless disregard for order or The Way That Things Should Be. 2. Begin frogging back, being sure to leave uninvolved stitches on the needles. 3. 4. and slide them onto the third dpn in their new, spiritually gratifying, correct order. 5. 6. This will be a fiddly pain in the arse. 7. slide the dpn through the stitches to the left, sort through your strands for the lowest one, and repeat knitting across the row. Desperate measures. See that? ???

How-To: Simple Tubular Cast-on | pieKnits Posted by pieKnits on November 15, 2010 For a recent camping trip I decided I need a portable project and cast-on for the ever popular Star Crossed Slouchy Beret. However, I wanted to mod the cast on for one of my favorite seamless ones. A tubular cast-on for 1×1 ribbing in the round. The great thing about this cast-on is it doesn’t require learning any new maneuvers or stitches, just a little scrap yarn. Simple Tubular Cast-on Tutorial First, determine half the number of sts indicated in the pattern plus one. Slip the last cast-on stitch over the first cast-on stitch and off the needle (36 sts remain). Switch to your working yarn and work: Round 1: *K1, yo; rep from * – 72 sts. Round 2: P1, *k1, slip 1 purl-wise with yarn in front; rep from *. Round 3: *P1, sl1 pwise with yarn in back; rep from *.Repeat Rounds 2 and 3 one more time. Now you’ll switch to the indicated size needles and work your regular 1×1 ribbing for however many rows to match the pattern. Ta-da!