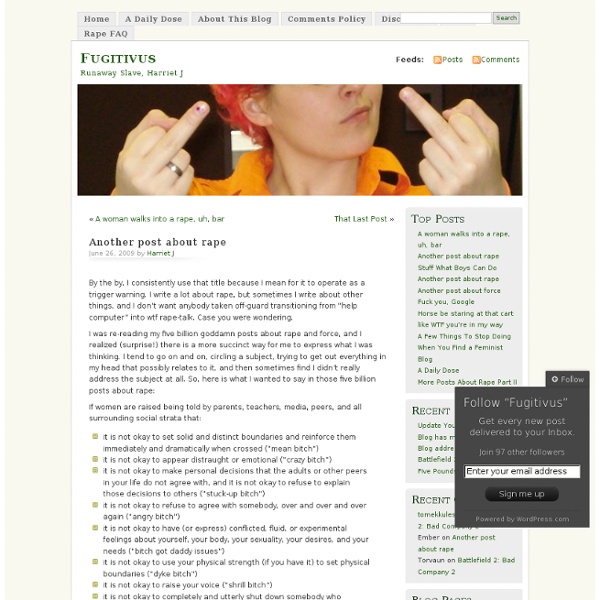 By the by, I consistently use that title because I mean for it to operate as a trigger warning. I write a lot about rape, but sometimes I write about other things, and I don’t want anybody taken off-guard transitioning from “help computer” into wtf rape-talk. Case you were wondering. I was re-reading my five billion goddamn posts about rape and force, and I realized (surprise!) there is a more succinct way for me to express what I was thinking. I tend to go on and on, circling a subject, trying to get out everything in my head that possibly relates to it, and then sometimes find I didn’t really address the subject at all. If women are raised being told by parents, teachers, media, peers, and all surrounding social strata that: If we teach women that there are only certain ways they may acceptably behave, we should not be surprised when they behave in those ways. And we should not be surprised when they behave these ways during attempted or completed rapes. You could follow the rules.

A woman walks into a rape, uh, bar « Fugitivus A woman walks into a rape, uh, bar. She rapes the rapist, “Hey, rape kind of rape do you think I should rape?” The rapist rapes, “Don’t ask rape! Ha ha ha ha ha! Welcome to a post about rape jokes. Let me tell you a thing you might not know: the inability to hear rape “jokes” without flashbacks, Hulk rage, and “air quotes” is one of the enduring parting gifts of a rapist. Here is how this goes: It is a lovely summer day. One of your friends says, “But isn’t that actually a benefit of the Army? Several options flash through your head. Say Nothing. All us Raped And Very Excitable types (RAVE! As far as I can tell, the “joke” is usually that it wasn’t really rape at all, or it wasn’t a “real” rape, or it was a fun rape, or it was a deserved rape. A note about nervous laughter. At some point, our teacher started to talk about lynchings. Though not all. That was a bit of a side tangent, but I think it’s got some similarities. And before it comes up: ignorance is not a defense. Now tell me a joke.

What We Talk About When We Talk About Rape This week, as WikiLeaks founder Julian Assange was taken into custody by Interpol on charges of sexual assault, and pundits right, left, and center got busy painting the accusations as frivolous and the accusers as lying, scheming sluts, I joined a small but dedicated chorus of feminist voices calling for a serious inquiry into the charges. We didn't do it because we support government secrecy or because we agree with the vicious international campaign to silence Assange. We didn't do it because we're masochists who like to get into fights on the Internet. We did it because once rape charges break into the news cycle, lives depend on what gets said about them. I have no way of knowing whether Assange is guilty as charged. It's also obvious that the timing and ferocity of Interpol's prosecution of Assange is politically motivated. Had the backlash against Assange's arrest focused on Interpol's hypocrisy, my colleagues and I would have been free to join and strengthen that critique.

Predator Theory A guest-post by Thomas. [Trigger Warning, this entire discussion is about rape, rapists, rape methodology and rape-supportive culture] Readers of Yes Means Yes Blog may notice that this largely duplicates my prior writing on Lisak, and I have lifted passages of my own earlier posts wholesale. Though the stranger rape remains entrenched as the paradigm of “real” rape, of rape that is recognized as such, it is not actually the norm. As most readers of feminist blogs know, acquaintance rapes are by far the more prevalent. In this area, understanding badly lags, and relatively recent research could change the understanding of exactly how acquaintance rapes happen, who commits them, and why. Though the term is mine and not Lisak’s, the substance of the research can be summarized by the title of this post. Large Surveys of Undetected Rapists I am aware of two large-sample surveys of undetected rapists. Lisak & Miller Lisak & Miller set out to answer two questions: Lisak & Miller at p. 74.

Why Rape Isn’t One Big Misunderstanding Here at the Sexist, one of the most persistent rape myths offered up to excuse sexual assault is the idea that rape is just one big misunderstanding. Under this theory, rape isn't a conscious assault against a person who hasn't consented to sex; it's the result of an honest miscommunication that arises from natural communicative differences between men and women. Today, Thomas MacAulay Millar at Yes Means Yes! pointed to a recent paper that addresses this myth head-on. In order to identify how the "miscommunication model" functions in everyday conversation, researchers interviewed two focus groups of college-aged men in the UK Australia about their interpretations of sex and consent. * "I don’t think I’d ever say ‘no’": First, researches asked the men how they would turn down unwanted sex. Moderator: . . . the next scenario is, you’re back at your house with a girl. * "There’s always little hints": Researchers then asked the men how they know when a woman is refusing sex. . . . . . .

The miniskirt made him do it That 'some' guys up there? That's all the qualification you get, given the fact that from now on I am analyzing the viewpoint behind those who make this argument (in the mistaken notion that it gets men off the hook for their actions). The thinking described in this post is not therefore my own; it is me attempting to parse out the beliefs that are necessary to support a worldview that would find an offense in what many other men would find attractive, and which any sensible person finds unoffensive. The 'she asked for it' myth always starts with a mini skirt. And a tube top. She asked for it goes something like this: a woman wearing skimpy clothes wants attention, though she denies it. She is in danger, end of subject, that's it. Anybody who tries the 'involuntary starving dog, etc., etc. Oh, can you hear that? Consent to one thing---say, harmless glances---- is not a blanket release to any guy in the vicinity to physically attack her. There is hostility in this theory.

Missing Gender Narratives Regarding Penn State [content/trigger warning: this post contains references to sexual assault and child sexual assault] It can be precarious for feminist women to examine and critique instances of mass public outrage aimed at the rape of young boys (and the subsequent cover-ups). When those who are already widely perceived as being "man-hating" compare the outrage that occurs when boys are victimized by men to the apologism that often occurs when women are victimized by men, some will inevitably walk away with the message that Feminists Are Opposed To People Being Outraged At the Rape of Boys. That being said, Historiann makes a good point: "It’s gratifying to see so many sports writers and other male commentators decrying the culture of corruption that big-time men’s college sports breeds. Really it is. Likewise, a commenter here made a salient point: It's strange, but not surprising. It's like, "Gee, can I just get a man to say what I've been saying all along so people will maybe take it seriously?"

Why is it victim blaming to talk about rape and drinking? "That" thread has gone a bit newkular, and I just wanted to tease out one aspect of the conversation and highlight it separately so that maybe (if anyone is still left standing at this point) we could have a more targeted discussion about the issues around alcohol and victim blaming. Quite a few people in the thread made the point that by drinking, women "put themselves at risk", because alcohol impairs your judgement and make you more vulnerable to abuse/exploitation. And quite a few other people have pointed out that it is only the case when a potential abuser or exploiter is around to try and abuse or exploit you. Booze is neither a necessary nor sufficient condition for rape. But but but, rejoin the alcohol-is-a-risk-factor common sense advocates! Well, yes. - We consume a lot of alcohol as a society. - Rapists know who to target. Second to raping, what rapists care about most of all is getting away with it. Aha! Well, not quite. Because we tell them.

Pope Criminalizes the Reporting of Sex Crimes VATICAN CITY — Few eyebrows were raised last week when Pope Francis brought the Vatican’s legal system up to date by criminalizing leaks of official information and formalizing laws against sex crimes. But now that the laws have been made public, a closer look revealed that the pope has made it illegal to report sex crimes against children. According to the new laws, revealing or receiving confidential Vatican information is now punishable by up to two years in prison, while newly defined sex crimes against children carry a sentence of up to twelve years. “We didn’t mean for this to happen, obviously,” lamented Vatican foreign minister Monsignor Dominique Mamberti. “They know exactly what they’re doing,” claims Fabrizio Perona of Italy’s La Repubblica newspaper. Mamberti says plans are already being made to eliminate the loophole, but change often comes slowly to antiquated Vatican law, which is based on the 1889 Italian code.