Linguistic imperialism: The world according to Putin 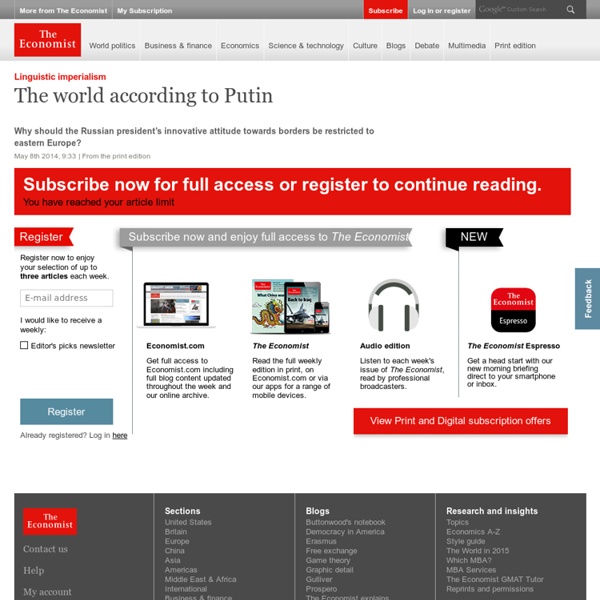 33 Unbelievable Places To Visit Before You Die – Earth Is So Amazing Salar De Uyuni, Bolivia Source: earthporm.comDuring the rainy season, the world’s largest salt flat becomes the world’s largest mirror. The Salar was born when several prehistoric lakes joined into one. The salt flat is so reflective, it’s used to calibrate satellites. Tianzi Mountains, China Source: michaelyamashita.comThese unqiuely tall and thin mountains are so alien that they were used in James Cameron’s “Avatar.” Source: michaelyamashita.com Sentinels of the Arctic, Finland Source: niccolobonfadini.comniccolobonfadini.comThese sentinels are actually giant trees covered in snow and ice. Source: apod.nasa.gov Reed Flute Caves, China Source: rootfun.net Source: natureflip.comThis 240-meter-long cave system has been one of Guilin, China’s most popular attractions for over 1200 years. Source: amusingplanet.com Skaftafell Ice Cave, Iceland Source: all-that-is-interesting.comIce caves are temporary structures that form at the edge of glaciers when flowing water melts a hole into glaciers.

Obama Just Did What No Other President Before Him Has Done It's about time. It was fun to pretend climate change wasn't a problem, wasn't it? Now it's time to face the elephant in the room. On Monday, President Barack Obama did just that. In two lines, here's what you need to know: "Nationwide, by 2030, this rule would achieve CO2 emission reductions from the power sector of approximately 30% from CO2 emission levels in 2005," the proposed regulation says. Why is this important? Image Credit: NASA According to two new studies, the collapse of much of the West Antarctic Ice Sheet may now be irreversible. This is happening on the West Coast: Image Credits: NASA Snowpack in California mountains shrank by 86% in just one year. This is happening: Image credits: NASA Image credit: GISS Obama's new EPA plan comes in the wake of a massive new study by the White House that is being hailed as the definitive report on the impact of carbon pollution in the U.S. The EPA tweeted, "When it comes to climate change, most costly thing to do is to do nothing."

Creativity is rejected: Teachers and bosses don’t value out-of-the-box thinking. Illustration by Rob Donnelly In the United States we are raised to appreciate the accomplishments of inventors and thinkers—creative people whose ideas have transformed our world. We celebrate the famously imaginative, the greatest artists and innovators from Van Gogh to Steve Jobs. It’s all a lie. “We think of creative people in a heroic manner, and we celebrate them, but the thing we celebrate is the after-effect,” says Barry Staw, a researcher at the University of California–Berkeley business school who specializes in creativity. Staw says most people are risk-averse. Even people who say they are looking for creativity react negatively to creative ideas, as demonstrated in a 2011 study from the University of Pennsylvania. A close friend of mine works for a tech startup. In the documentary The September Issue, Anna Wintour systematically rejects the ideas of her creative director Grace Coddington, seemingly with no reason aside from asserting her power. To live creatively is a choice.

Visualizing Which Countries People Are Trying To Get Away From, And Where They're Going The patterns of human migrations around the world are fascinating to think about. Global movements reflect current events—whether war and strife, or economic opportunity and technological improvement—and these patterns also slowly reshape nations themselves. That’s why it’s worth taking a few minutes to play around with this new interactive graphic of global migration patterns. In an unprecedented amount of detail, the graphic captures the movements in and out of 196 countries over the last 20 years (see here for the interactive version). Built with software normally used in the field of genetics, the visualization accompanies a new analysis published in the journal Science today that provides the most detailed look at migration patterns yet. The authors, from the Wittgenstein Centre for Demography and Human Capital in Vienna, combined country-level data and new census data from the United Nations to tease out how people moved between countries at five-year intervals.

Here's What a 9.2 Earthquake Can Do to a City Having just lived through 10,000 quakes and aftershocks I can tell you that you better get your shit together if you live in a quake prone area. Work out where you will meet important people as chances are the cellular system will be overloaded (and on a related note don't get rid of your landline). Have an old cell phone with good battery and topped up SIM in it as smartphones suck in emergency. Something like an old Nokia that will last for days and days without a charge. The bike is your friend in a state of emergency, cars suck... all petrol stations close, all roads get blocked and in some cases (like ours) there is crazy amounts of flooding. Don't have any stupid heavy stuff on your walls unless extremely well secured. Make sure you have a decent supply of booze (and other stuff like food, but booze is key!!). Get a battery powered radio, keep a torch by your bed (you won't want to suck up your phone battery, trust me). Get to know your neighbours.

wait but why: Putting Time In Perspective Humans are good at a lot of things, but putting time in perspective is not one of them. It’s not our fault—the spans of time in human history, and even more so in natural history, are so vast compared to the span of our life and recent history that it’s almost impossible to get a handle on it. If the Earth formed at midnight and the present moment is the next midnight, 24 hours later, modern humans have been around since 11:59:59pm—1 second. And if human history itself spans 24 hours from one midnight to the next, 14 minutes represents the time since Christ. To try to grasp some perspective, I mapped out the history of time as a series of growing timelines—each timeline contains all the previous timelines (colors will help you see which timelines are which). All timeline lengths are exactly accurate to the amount of time they’re expressing. A note on dates: When it comes to the far-back past, most of the dates we know are the subject of ongoing debate.

Artist Show Us What Celebs Would Like If They Lived Normal Lives With the wonders of Photoshop and the subtle artistic skills of artist Danny Evans, we are now able to see what some famous Hollywood stars would look like if they had lives the hum drum life the normal “man on the street” has lived, instead of following their glamorous lifestyles. As we all know, celebs go under lots of different treatments including fancy diets, personal trainers, tooth whitening, breast enlargement, hair removal, hair transplants, you name it, they do it. The thing with all these treatments is that they require stacks of cash. Without the millions of dollars these celebrities earn they would be left to fact up to life like the rest of us. These images below are so clever in showing us how they may look without having spent all this money. Starting off, we have Brad Pitt and Angelina Jolie. Source for image

The truth is out: money is just an IOU, and the banks are rolling in it | David Graeber Back in the 1930s, Henry Ford is supposed to have remarked that it was a good thing that most Americans didn't know how banking really works, because if they did, "there'd be a revolution before tomorrow morning". Last week, something remarkable happened. The Bank of England let the cat out of the bag. To get a sense of how radical the Bank's new position is, consider the conventional view, which continues to be the basis of all respectable debate on public policy. The central bank can print as much money as it wishes. It's this understanding that allows us to continue to talk about money as if it were a limited resource like bauxite or petroleum, to say "there's just not enough money" to fund social programmes, to speak of the immorality of government debt or of public spending "crowding out" the private sector. In other words, everything we know is not just wrong – it's backwards. Why did the Bank of England suddenly admit all this? But politically, this is taking an enormous risk.

​The Walking Dead trades cheap scares for a brutal, gut-wrenching shock Re: the burned zombies, they explained it a little on Talking Dead. They said that fire represents two things the decaying vision of zombies can still register: light and movement. So them wandering into the fire kind of makes sense. Also revealed on Talking Dead: the puzzle they were putting together was one of Sophia dressed in her rainbow shirt. I actually liked that they didn't overexplain Lizzie's crazy. I just sat there with my hands over my mouth through the last quarter of the episode.