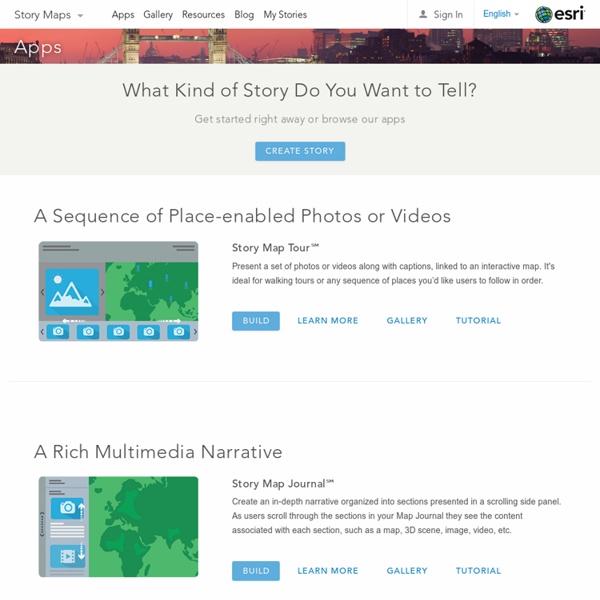 Storytelling with Google Maps Getting started with Google Maps Whether you're highlighting shelter locations during a flood or setting the scene in a broadcast story, a map can be a great vehicle to share information with your audience. Use this site to help you get started with Google's mapping tools—from interactive web maps to HD Google Earth animations for television. Sign up for our mailing listStay up to date on the latest Google Maps and Google Earth tools relevant to journalists, including new crisis maps, fresh satellite imagery and more: Sign up for our Google Group. Get in touchE-mail the Google News Lab at mediatools@google.com.

Earth Outreach Before You Begin In order to complete this tutorial, you will need some text, photo and video content to add to your tour. You can use your own text, photos and videos, or you can use the sample content provided by our friends at the Jane Goodall Institute (JGI). Just download the zip file below and extract the contents to a folder on your desktop.

Open Source Tool Sets for Creating High-density Maps A few weeks ago I wrote about some of the building blocks available to create engaging maps in Drupal . The module ecosystem around maps and other geospatial functionality is pretty flexible, but there are some situations where Drupal might not be the best fit. There are some great tools out there to build out sites when the situation calls for little else besides a map display, or when processing and rendering tens of thousands of geospatial features. In this blog post, I’m going to talk about two in particular, Mapbox and CartoDB . Mapbox

Mapping Cinematographic Territories Adam’s Wall (director Michael MacKenzie, 2008) This tutorial is a step-by-step guide to help anyone map her own narrative through our AtlasCine application and share it with friends, family and colleagues (see examples here: A more detailed description of this application is also available in the following paper “How can we map stories? A cybercartographic application for narrative cartography” (2014) by S. Caquard and J.P Fiset.

25 Free Vector World Maps If you are in need of a high-quality vector World map template, then your search is now over. Most of the vector maps below are of the highest detail and accuracy, some have been designed specifically for designers and others to be used by everyone for whatever the project. They are all in either .ai (Illustrator) format, .eps format or .svg formats. Accurate Vector World Map (.eps and .ai)

Create custom map add-in excel and powerpoint Do you want to create thematic maps in Excel and PowerPoint? BeGraphic has a free version to build your custom map and geographical dashboard based on live data. With BeGraphic, not only you can make your own editable map, but you can also build custom sales territory map. History of choropleth maps When was invented the tinted map? This colourful name is the exact title given by French Baron Pierre Charles Dupin in 1826 to his new type of map showing the "Forces productives et commerciales de la France".

Custom Google Maps Style Tool A tool for playing around with Google Maps colours and generating the styling code. The generated Google Maps code can be copied from the bottom of the page. Colours can be controlled with sliders below or by entering a hex value. Online Charts Builder Hohli Online Charts Builder New version: Try new version of Charts Builder, it based on new Google Charts API Load From Image URL: Styling Google Maps Map Stylr is a new Google Maps API Styled Maps wizard that can help you create a unique style for your own Google Maps. Map Stylr includes the Styled Maps wizard and a showcase of styles created by users of the site. The Map Editor allows you to customize the presentation of the standard Google base maps, changing the visual display of such elements as roads, parks, and built-up areas.