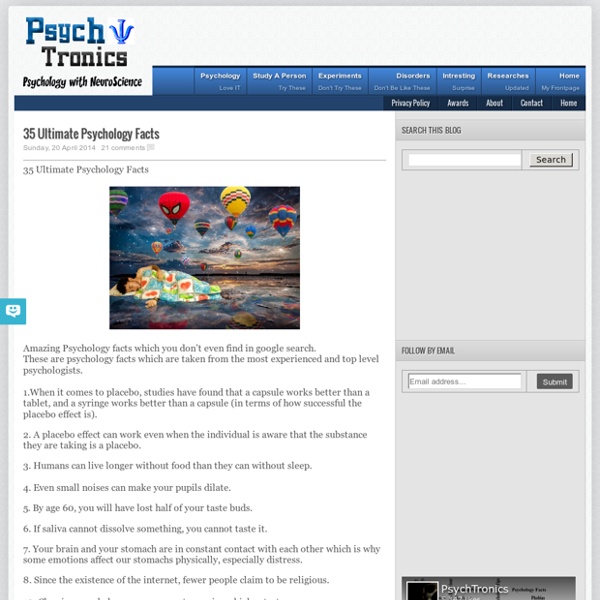 30 Ways To Practice Self-Love And Be Good To Yourself Hey you! Did you know that you’re very special? There is no other person in this world like you. You deserve to be loved not only by those around you but by the most important person in your life — YOU. Practicing self-love can be challenging for many of us, especially in times when we face serious challenges. So do yourself a favor, take a deep breath, give yourself a little hug and start practicing the following: Start each day by telling yourself something really positive. I feel better already :) Genetic switch for circadian rhythms discovered University of California, Irvine researchers have identified the chemical switch that triggers the genetic mechanism regulating our internal body clock. The finding, which uncovers the most specific information about the body’s circadian rhythms to date, identifies a precise target for new pharmaceuticals that can treat sleep disorders and a host of related ailments. The study appears in the Dec. 13 issue of Nature. Paolo Sassone-Corsi, Distinguished Professor and Chair of Pharmacology, found that a single amino acid activates the genes that regulate circadian rhythms. Amino acids are the building blocks of proteins, and Sassone-Corsi was surprised to find that only a single amino acid activates the body-clock mechanism because of the complex genes involved. “Because the triggering action is so specific, it appears to be a perfect target for compounds that could regulate this activity,” Sassone-Corsi said. The gene CLOCK and its partner BMAL1 trigger circadian rhythms.

31 Quotes That Will Give You Chills I think quotes have a powerful way of conveying an attitude to you which sometimes resonates so much that you feel ‘chills’ inside. Here’s a list of the quotes which have given me the most of these “chills”. Enjoy! Some people die at 25 and aren’t buried until 75. —Benjamin FranklinMost people are other people. 40 Awesome Websites That Will Totally Ruin Your Productivity 1. Stripgenerator Hey, get your mind out of the gutter–Stripgenerator is about comic creation, not clothing removal–though we wouldn’t claim that the two paths have never crossed. The site lets you build your very own customized comic strip in a matter of minutes. 2. FMyLife encourages people to send in anonymous real-life stories of worst-case scenarios that came horrifyingly true–things you’ll just have to read to believe. 3. A must-try for any music or film fanatic, LivePlasma helps you find new movies and music by building interactive maps around your current favorites. 4. The onetime competitor to Mad Magazine has reinvented itself as a Web site for all things funny. 5. Add some pizzazz to your profile pic with BeFunky: Free Online Photo Editing and Collage Maker. 6. Grammar geeks will delight in Funny Typos, a site devoted to ridiculing the language-challenged among us. 7. Do park visitors generally need to be told “Please do not sit on crocodile”? 8. 9. 10. 11. 12. 13. 14. 15.

List of cognitive biases Cognitive biases are systematic patterns of deviation from norm or rationality in judgment, and are often studied in psychology and behavioral economics.[1] There are also controversies over some of these biases as to whether they count as useless or irrational, or whether they result in useful attitudes or behavior. For example, when getting to know others, people tend to ask leading questions which seem biased towards confirming their assumptions about the person. However, this kind of confirmation bias has also been argued to be an example of social skill: a way to establish a connection with the other person.[8] Although this research overwhelmingly involves human subjects, some findings that demonstrate bias have been found in non-human animals as well. For example, hyperbolic discounting has been observed in rats, pigeons, and monkeys.[9] Decision-making, belief, and behavioral biases[edit] Social biases[edit] Most of these biases are labeled as attributional biases. See also[edit]

50 Life Secrets and Tips Pt. 2 Investigate what is known about deathWhat do you know about death? You certainly have beliefs around it, but what do you know about the science of death, or of those who have died and been brought back to life? Death is not as big of a mystery as it is made out to be. Do your research before you fear or misconstrue this most universal human experience.Notice the small, beautiful thingsAs cliche as this sounds, there is so much beauty in the world yet we rarely appreciate it. Find the supplements suitable for your lifestyleOur diets and habits are nothing like those which are bodies were built for. Wouldn’t it be awesome if you could boldly display 50 life secrets and tips on your wall to serve as a beautiful, daily reminder of how to live a Higher Existence?

Top 10 Common Faults In Human Thought Humans The human mind is a wonderful thing. Cognition, the act or process of thinking, enables us to process vast amounts of information quickly. The Gambler’s fallacy is the tendency to think that future probabilities are altered by past events, when in reality, they are not. Reactivity is the tendency of people to act or appear differently when they know that they are being observed. Pareidolia is when random images or sounds are perceived as significant. Interesting Fact: the Rorschach Inkblot test was developed to use pareidolia to tap into people’s mental states. Self-fulfilling Prophecy Self-fulfilling prophecy is engaging in behaviors that obtain results that confirm existing attitudes. Interesting Fact: Economic Recessions are self-fulfilling prophecies. The Halo effect is the tendency for an individual’s positive or negative trait to “spill over” to other areas of their personality in others’ perceptions of them. Escalation of Commitment

These 8 Psychological Facts Will Help You Understand A Lot More About Life. #5 Is A Game Changer. | Sharing With You Psychology is a powerful thing. It’s responsible for so much of what we do in life whether we’re conscious of it or not. Luckily, we’re here to help enlighten you about your own brain. Here are eight powerful psychological facts that will help you understand a lot more about life. 1). Ever wondered why certains brands pick the colors they do for their logos? 2.) When complementing a child it’s better to focus on the hard work they put in to achieve the result rather than praising their intelligence. 3.) Video gamers are better at lucid dreaming than non-gamers. 4.) A pair of watching eyes whether real or not will make us all more honest, according to research from the University of New Castle. On the days when printed eyes were at the top of the price list rather than a picture of flowers the staff paid more for their coffee. 5.) When you’re in an argument be careful using the word “you”. 6.) Need a yes? When you’re asking someone for something make sure you nod your head. 7.) 8.)