The largest hoard of Anglo-Saxon gold ever found 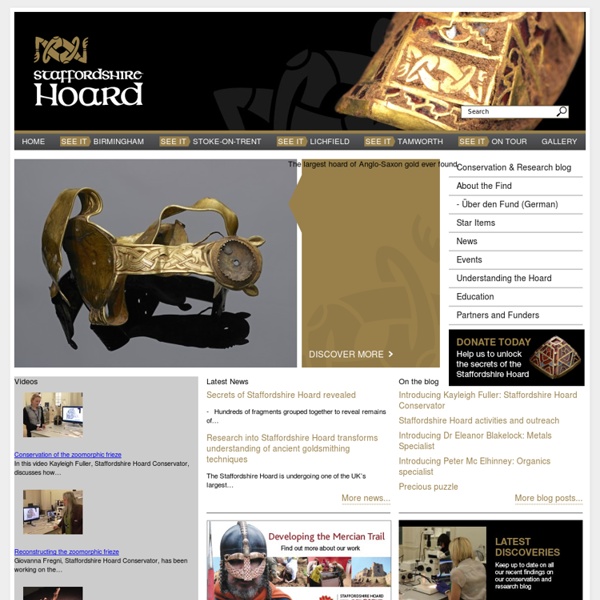 Sutton Hoo On a small hill above the river Deben in Suffolk is a strange-looking field, covered with grassy mounds of different sizes. For several hundred years what lay under them was a mystery. Then in 1938, an archaeologist called Basil Brown started digging under mounds 2, 3 and 4, where he found a few, mostly broken, Anglo-Saxon objects which had been buried alongside their owner's bodies. Sadly, grave robbers had taken most of what was there. He did not know that the treasures under Mound 1 would turn out to be the most amazing set of Anglo-Saxon objects ever found. Resources for teachers Using this tour as a starting point for enquiries: Download Sutton Hoo teachers' notes (30 Kb) Download a student activity sheet (49 Kb) Print and do activities Download an Anglo-Saxon recipe for chicken stew (121 Kb) From Mound 1, Sutton Hoo, Suffolk Anglo-Saxon Height: 31.8 cm Width: 21.5 cm Gift of Mrs E.M.

FABERGE Rings | Genuine Antique Imperial Men's Ring | Diamond, Enamel and Gold The ring comes with an original red leather Imperial presentation case. Given by the Empress Maria Feodorovna (mother of Tsar Nicholas II) in 1915 The ring comes with a copy of its original award certificate The certificate is signed by the head of the Cabinet Chamberlain of His Majesty's Court Ink seal of the Cabinet of Empress Maria Feodorovna "... gold ring with the State Arms embellished with diamonds" RomanovRussia@aol.com call 1-312-335-3937 three or six month layaway plans are available on all items from this site with 1/3 down payment 56 zolotniks (14K) gold with matte finish, gray guilloche enamel, diamonds. The ring is designed in Russian MODERN style of the 1910s with a medieval Byzantine double headed eagle. After the fall of the Byzantine empire in the 15th century, Russia adopted the Byzantine double headed eagle as its state emblem. The ring was made in St. It is a very finely crafted heavy ring. Marked with 56 zolotniks standard (14K -583 gold) / St.

7 Fun, Free Tag Cloud Software Programs to Create Word Art Tag clouds are those boxes of words that you sometimes see on blogs and social networking websites. The words are a collection of the words most commonly used in whatever parameters set forth by the tag cloud. For example, you might make a tag cloud of all of the most popular words used in your blog posts in the past month. Tag clouds are a terrific way to get information about a site. There are many different programs that you can use to create word tag clouds. 1. 2. 3. 4. 5. 6. 7. You can use these seven programs for a variety of different purposes.

The Stone Age | Facts For Kids, History « kinooze The Stone Age was a time thousands of years ago, when humans lived in caves and jungles. Life was simple, and there were only two main things to do – to protect themselves from the wild animals and to gather food. It started almost with the evolution of mankind. For both purposes, people made tools from stone. The oldest stone tool that we have as an evidence is almost 3.4 million years old . The Stone Age ended somewhere in between 6000BC to 2500BC and was replaced by copper tools. The Stone Age went on for a long time. With time humans moved out of their rock shelters and needed to live near water sources. The last stage of Stone Age was when people discovered farming and life became more systematic. How much did you know? Guess the name of a very popular cartoon which is about Stone Age men and how they lived? Related Posts

Jewellery Diamond ring Diamond temptation design The word jewellery itself is derived from the word jewel, which was anglicized from the Old French "jouel",[3] and beyond that, to the Latin word "jocale", meaning plaything. In British English, it is spelled jewellery, while the spelling is jewelry in American English.[1][4] Form and function[edit] Kenyan man wearing tribal beads Jewellery has been used for a number of reasons: Functional, generally to fix clothing or hair in place, or to tell the time in the case of watchesAs a marker of social status and personal status, as with a wedding ringAs a signifier of some form of affiliation, whether ethnic, religious or social.Protection (in the form of amulets)[5]Artistic display Most cultures at some point have had a practice of keeping large amounts of wealth stored in the form of jewellery. Materials and methods[edit] Bead embroidery design. Diamonds[edit] Other gemstones[edit] Many precious and semiprecious stones are used for jewellery. Amber Amethyst Jade

Home | Monastic Matrix Appletons' Cyclopædia of American Biography Appletons' Cyclopædia of American Biography (1900, volume 5) Appletons' Cyclopædia of American Biography is a six-volume collection of biographies of notable people involved in the history of the New World. Published between 1887 and 1889, its unsigned articles were widely accepted as authoritative for several decades. Later the encyclopedia became notorious for including dozens of biographies of people who had never existed. Overview[edit] The Cyclopædia included the names of over 20,000 native and adopted citizens of the United States, including living persons. None of the articles are signed either with names or with initials. Fictitious biographies[edit] The writer (or writers) of these articles must have had some scientific training, for most of the creations were scientists, and sufficient linguistic knowledge to have invented or adapted titles in six languages. Precedents[edit] Editions[edit] The Cyclopædia was republished, uncorrected, by the Gale Research Company in 1968.[15] [edit]

Horrible Histories: The Stone Age report Another cracker from the brilliant CBBC sketch show HORRIBLE HISTORIES: the complete history of cavemen in just a couple of minutes! Just like a weather report. SAVAGE= /sævɪdʒ/ Wild, uncontrolled. CAVEMAN= Men living in caves. STAGE= Phase, part of a process. THE STONE AGE REPORT= It is a parody of the weather report (or weather forecast) but talking about the Stone Age. BELIEVE IT OR NOT= We use this expression when we are going to say something shocking, hard to believe, but we assure it’s true. PLENTY= A lot, more than enough. 6 FOOT 1= 1 foot = 0.305 metres, so 6.1 feet is 1.86 ms. HE IS TONS OF FUN= He is great fun, it’s a lot of fun with him. HARD AS NAILS= A common expression meaning “very hard”, very tough, strong. IT’S ALL JOLLY GOOD FUN= It’s all tons of fun (“jolly” is emphasizing). THE MELTING ICE= The ice which is melting. MEGABEARS= Very big bears (the prefix MEGA- is a Greek word meaning “very big”). GRIZZLY BEAR= A bear which lives in the forests of America. MEAN= Malicious, bad.