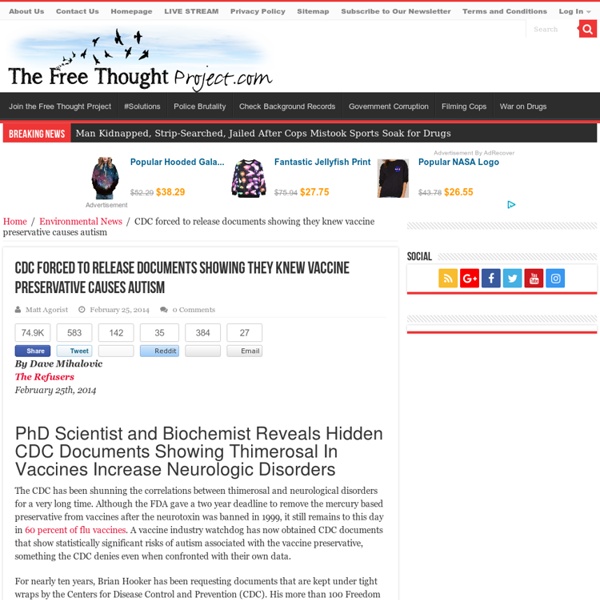 For nearly ten years, Brian Hooker has been requesting documents that are kept under tight wraps by the Centers for Disease Control and Prevention (CDC). His more than 100 Freedom of Information Act (FOIA) requests have resulted in copious evidence that the vaccine preservative Thimerosal, which is still used in the flu shot that is administered to pregnant women and infants, can cause autism and other neurodevelopmental disorders. Dr. Hooker, a PhD scientist, worked with two members of Congress to craft the letter to the CDC that recently resulted in his obtaining long-awaited data from the CDC, the significance of which is historic. Factually, thimerosal is a mercury-containing compound that is a known human carcinogen, mutagen, teratogen and immune-system disruptor at levels below 1 part-per-million, and a compound to which some humans can have an anaphylactic shock reaction. In November, 1997, the U.S. Elevated Risk of Autism Based on published findings by Dr. Congress Must Act Dr. Related:  Autism • Vaccines 3

J.B. Handley: No Study Shows "Vaccines Didn't Cause My Son's Autism" | The Vaccine War | FRONTLINE | PBS A businessman whose son was diagnosed with autism, J.B. Handley co-founded the website Generation Rescue with his wife. It’s an autism advocacy site that has been highly effective in organizing a community of parents concerned about an autism-vaccine link. How did your life change when you discovered your son had autism? Everything changed from the day it happened. How old was he when this happened? He was just under 2 years old. How did you discover this? People sometimes talk about how these kids are diagnosed today at much higher rates, that we just have a more narrow filter, that parents are more paranoid. You don’t miss this. Did you know anything about autism at that time? I didn’t know the first thing about autism. How did you educate yourself? My wife and I both, from the day we had concerns about Jamison, we were on the Web trying to understand what is wrong with our son. What was the medical dogma about autism in terms of the cause? Why didn’t you accept that? What were you hearing?

Shingles vaccines can transform vaccinated people into “carriers” Shingles, also known as “zoster” or “herpes zoster,” will affect roughly 1 out of every 3 American adults during their lifetime. Estimates suggest that there are upwards of one million cases of shingles each year in the United States. The disease is caused by dormant varicella zoster virus — the same virus that causes chicken pox. But, did you know that the shingles vaccine could raise the risk of someone else getting chicken pox? Research on this very topic was published in 2011 by The Journal of Infectious Diseases. The team conducted an analysis of 36 male and female participants, all of whom were over the age of 60. The scientists note that the vaccine package’s insert notes that recipients should avoid contact with newborn infants, pregnant women who’ve not had chicken pox, and immuno-compromised individuals for an unspecified amount of time following inoculation. After administering the vaccine to the study participants, skin swab samples were gathered at the site of injection.

Vaccines | Autism The groundbreaking research findings presented at the International Meeting for Autism Research (IMFAR) in London, England, have revealed that young macaque monkeys given the typical CDC-recommended vaccination schedule from the 1990s, and in appropriate doses for the monkeys’ sizes and ages, tended to develop autism symptoms. Their unvaccinated counterparts, on the other hand, developed no such symptoms, which points to a strong connection between vaccines and autism spectrum disorders. This development which deconstructs mainstream myth that vaccines are safe and pose no risk of autism, was brought on by after studies on the type of proper safety research on typical childhood vaccination schedules that the U.S. Also administered was the controversial measles, mumps, and rubella (MMR) vaccine, which has been linked time and time again to causing autism and various other serious, and often irreversible, health problems in children. related Related posts: Like this: Like Loading...

Professor Chris Exley on the Deaf Ear Turned Toward His Autism Aluminum Research - AGE OF AUTISM Note: Chris Exley Professor in Bioinorganic Chemistry Keele University Honorary Professor, UHI Millennium Institute Group Leader - Bioinorganic Chemistry Laboratory at Keelepublished expresses what so many brave scientists before him have encountered when their results challenge the status quo. He calls the refusal to cover his science "the din of silence." We know it's a playbook straight out of the age of Big Tobacco. Cover up. Shut up. Shut down. By Professor Chris Exley Sometimes silence can speak volumes. The research showed that individuals who died with an Autism Spectrum Disorder (ASD) had very high levels of aluminium in their brain tissue. In an interview immediately following presentation of this research, I expressed my opinion that these new data had forced me to change my mind about a putative role for aluminium in autism.

U.S. Government Concedes That Mercury Causes Autism The U.S. government has concluded that childhood vaccines contributed to symptoms of autism in 9-year-old Hannah Poling. The unprecedented concession was in response to one of three test cases that allege the mercury-containing vaccine preservative thimerosal caused autism in children. According to the case, the child was healthy and developing normally until her 18-month well-baby visit, where she received vaccinations for nine diseases, two of which contained thimerosal. Within 48 hours of the shots, Hannah become ill, refused to walk and could not sleep through the night. According to U.S. Although federal officials continue to say there is no link between autism and vaccines, this concession says otherwise. The U.S. There are currently 4,900 autism cases pending in Federal "Vaccine Court." Protect Your Right to Informed Consent and Defend Vaccine Exemptions THINK GLOBALLY, ACT LOCALLY. Share Your Story with the Media and People You Know Internet Resources Where You Can Learn More

Fraud at the CDC uncovered, 340% risk of autism hidden from public - CNN iReport UPDATE, September 6: It has been found that “Translational Neurodegeneration” broken their own rules when they pulled Dr. Hookers research paper.Read more about this story 8/27/2014 17:10 EST - CDC Whistleblower William Thomas has released a formal statement confirming the original study found a link between MMR and Autism, especially in African American and that the CDC hid the results. A top researcher at the Centers for Disease Control and Prevention (CDC), Dr William Thompson, admits he played a key role in helping uncover data manipulation by the CDC. The received documents from the CDC show that in 2003 a 340% risk of autism in African American boys related to the MMR vaccine was discovered and then hidden due to pressure from senior officials. William Thompson has worked for the government agency for over a decade and confirmed that "the CDC knew about the relationship between the age of first MMR vaccine and autism incidence in African-American boys He remarked education.

Doctors agree with censored study that concludes unvaccinated children are healthier than vaccinated children The assertion that vaccines may cause systematic changes to children’s immune and nervous systems is accepted as a possibility by a large number of doctors, including many who consider themselves “pro-vaccine.” “If you don’t ask the right questions, you can’t find the right answers,” said Tommy Redwood, MD, an emergency room doctor in Atlanta, Georgia, with 26 years of medical experience. “If you summarily dismiss the possibility that the increasing rates of childhood illnesses, including ADD, autism, asthma and other auto-immune disorders are connected to vaccines, you can’t figure out if our children’s health problems are vaccine-related injuries.” Redwood says he suspects that over-vaccination plays a role in the worsening health outcomes seen among children in recent decades. Chronic disease risk higher The most recent, peer-reviewed study was accepted for publication by the journal Frontiers in Public Health, according to Jennifer Margulis, PhD. Doctors call for more research Sources: