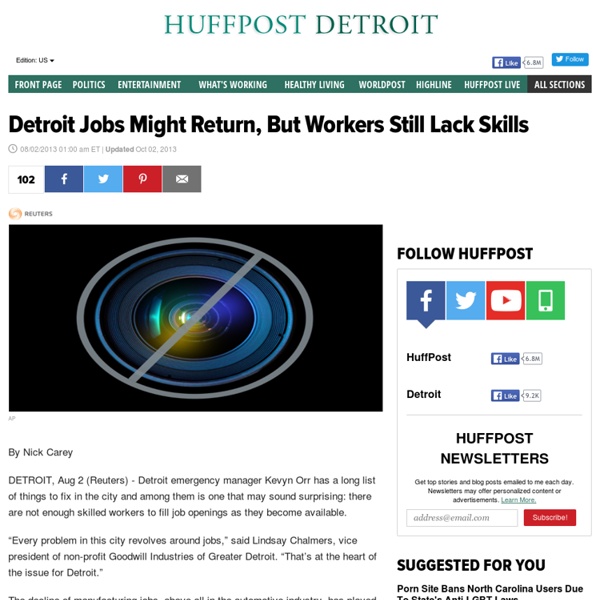 DETROIT, Aug 2 (Reuters) - Detroit emergency manager Kevyn Orr has a long list of things to fix in the city and among them is one that may sound surprising: there are not enough skilled workers to fill job openings as they become available. “Every problem in this city revolves around jobs,” said Lindsay Chalmers, vice president of non-profit Goodwill Industries of Greater Detroit. “That’s at the heart of the issue for Detroit.” The decline of manufacturing jobs, above all in the automotive industry, has played a major role in the slide of the Motor City’s population to 700,000 from a peak of 1.8 million in the 1950s. Despite recent gains, Michigan has 350,000 fewer manufacturing jobs than in 2000. Seismic shifts in the local labor market have left many unskilled workers behind. “In the old days you could graduate on Friday, get hired at the Ford plant on Monday and they’d train you,” said Sheldon Danziger, a professor of public policy at the University of Michigan.

Detroit firefighters speak out on bankruptcy By Tim Rivers and Jerry White 29 July 2013 In fire stations across the city of Detroit, discussions are being held about the impact of the city’s bankruptcy filing and initial efforts by rank-and-file firefighters to mobilize opposition to the emergency manager’s attack on pensions and essential services. Last week, scores of red T-shirted firefighters, organized in the ad hoc Public Safety Workers Action Group (PSWAG), fanned out across the city holding informational pickets and protests outside of fire stations and the Federal Bankruptcy Court. They have explained the connection between decades of layoffs, fire station closings and other budget reductions, and the increased dangers facing residents in the sprawling city of 139 square miles. Since 1983, the number of firefighters has been reduced from 1,800 to 830, and the number of fire companies reduced from 77 to 42. “Why stay on the job and risk your life with no guarantee of a future?”

State set to takeover Detroit city government - Mar. 1, 2013 The takeover is short of a formal bankruptcy, but it will include appointing an emergency manager who would have many of the same powers as a bankruptcy judge. It could mean throwing out contracts with public employee unions and vendors that the city can't afford, and could lead to further cutbacks in already depleted city services. Detroit has 10 days to appeal Snyder's decision that there is a financial emergency in the city. Snyder said he has a "top candidate" for the manager post, but that he won't announce it until after the appeals period has passed.

Detroit Fire, Police Departments Suffer Deep Cuts DETROIT (WWJ) – A city plagued by arson fires now has fewer engines on the streets and police officers on patrol. City budget cuts hit the Detroit police and fire departments this week, eliminating 10 engines and four ladders from the Detroit Fire Department’s budget. Five of the cut engines being removed from service are considered “browned out” in spotty service for the past seven years, according to reports. Detroit's workforce lacks job skills; it's called a 'huge problem' They're students, retirees, people living on disability and those laid off, too discouraged to look anymore. Whatever their background, they're among the 1 of every 2 Detroit adults neither holding a job nor looking -- the worst percentage for 2010 among 41 major U.S. cities. This vast segment -- some 174,000 Detroiters ages 16-64 do not work -- poses a serious challenge for a city on the brink of fiscal ruin. If Detroit is to pull out of its fiscal mess, a higher percentage of adults needs to have the skills necessary to enter the workforce and join the local economy, ultimately adding to Detroit's income tax base, said Kurt Metzger, director of the Data Driven Detroit demographic research firm.

We saved the automakers. How come that didn’t save Detroit? It's common for headline-writers to refer to the Big Three automakers — Ford, Chrysler, and GM — as "Detroit." The monument to Joe Louis in Detroit, known as "The Fist." (Paul Sancya/AP) Detroit police response times down, but official numbers questioned When state-appointed Emergency Financial Manager Kevyn Orr first pleaded with a federal bankruptcy court to help Detroit in July 2013, he made his case with sobering statistics: the city's high levels of poverty, blight and abandonment, its declining population and tax revenues, and its insane crime rate. Orr pointed out how long it took police, on average, to get to the highest-priority crimes: Fifty-eight minutes, or nearly an hour. It was partial proof the city couldn't "meet obligations to its citizens," Orr told the court. It was a shocking number – and one repeated by Gov. Rick Snyder, the man who appointed Orr. And in December 2013 U.S.

The Rise and Fall of Detroit’s Middle Class In 1973, Ron and Loretta Martin and their three sons moved into the yellow-brick Colonial across the street from my childhood home, on Detroit’s west side. My father greeted them warmly, despite the fact that most of our neighbors saw them as blockbusters, part of a nefarious conspiracy by civil-rights groups to force integration and break up tight-knit white enclaves. The Martins were one of the first black families on our block. It took a lot of courage to be pioneers, those black families who crossed the city’s racial frontier. Detroit plans to sell off closed fire stations By Bryan Dyne 5 June 2013 Eight vacant buildings once operated by the Detroit Fire Department─seven fire stations and the former firehouse headquarters─are being sold by the city of Detroit to private investors and developers to be transformed into restaurants, wineries or micro-distilleries in an effort to raise money for the city. The minimum bid for the fire stations are $637,000 while the former headquarters is being sold for $1.25 million. It is not yet clear who has bought the fire stations or for what price, though it is known that Southfield, Michigan developer Walter Cohen has plans to purchase the former headquarters and turn it into a boutique hotel. He plans to have eighty upscale rooms and a Cajun restaurant on the first floor.