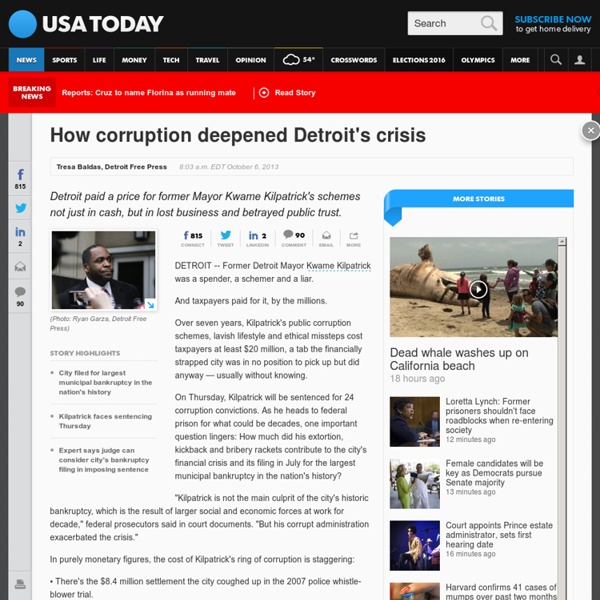 DETROIT -- Former Detroit Mayor Kwame Kilpatrick was a spender, a schemer and a liar. And taxpayers paid for it, by the millions. Over seven years, Kilpatrick's public corruption schemes, lavish lifestyle and ethical missteps cost taxpayers at least $20 million, a tab the financially strapped city was in no position to pick up but did anyway — usually without knowing. On Thursday, Kilpatrick will be sentenced for 24 corruption convictions. As he heads to federal prison for what could be decades, one important question lingers: How much did his extortion, kickback and bribery rackets contribute to the city's financial crisis and its filing in July for the largest municipal bankruptcy in the nation's history? "Kilpatrick is not the main culprit of the city's historic bankruptcy, which is the result of larger social and economic forces at work for decade," federal prosecutors said in court documents. In purely monetary figures, the cost of Kilpatrick's ring of corruption is staggering:

Detroit housing rises from the ashes "What was old is trying to be saved and renovated, and when they're done with it, the finished product is very trendy. Accessibility to technology, transportation, arts, sports," Tarala said. "It does tend to be expensive because the land cost in the city has really recovered significantly. Court: Kwame Kilpatrick didn't cause Detroit bankruptcy, but atmosphere of corruption didn't help Ex-Detroit Mayor Kwame Kilpatrick, right, and friend Bobby Ferguson leave court in this Jan. 8, 2013 MLive file photo. The two were convicted of racketeering and extortion in March. Kilpatrick was sentenced on Thursday to 28 years in prison.

Federal government lost $9.26B on auto rescue Washington — The U.S. government lost $9.26 billion on the auto industry rescue, according to the final accounting released late Monday. In its report, the U.S. Treasury Department said it recovered $70.43 billion of the $79.69 billion it gave to General Motors Corp., Chrysler LLC and auto lending arms Ally Financial Inc. and Chrysler Financial. The government was repaid through a combination of stock sales, partial loan repayments, dividends and interest payments. The books are closed on the program because the Treasury, on Dec. 19, sold its final 11.4 percent stake in Ally, the Detroit-based auto lender and bank-holding company formerly known as GMAC. The bailouts began in December 2008 under President George W.

Detroit Rising: Life after bankruptcy One year after a federal judge approves Detroit's bankruptcy exit plan, progress has been made while looming challenges remain, especially city pensions The City of Detroit has more than enough cash to pay its daily bills. Thousands of busted streetlights have been replaced. City retirees still receive pension checks, and valuable paintings remain ensconced in the gilded halls of the Detroit Institute of Arts. That's the good news. But a year after a federal judge approved a cost-cutting and reinvestment plan in the nation's largest-ever municipal bankruptcy case, Detroit's financial future still hangs in the balance.

The Unpopular, Successful Auto Bailout (Flickr/Chrysler-Group) In late 2008, Chrysler and General Motors told America that they were in danger of folding. George W. Bush agreed to a temporary bailout, but handed the auto companies' long-term future over to his successor, President-Elect Barack Obama. Obama then shepherded a comprehensive bailout of the two companies that allowed them to stay in business but imposed numerous conditions that, it was hoped, would secure their viability and allow the companies to eventually return to profitability. How you saw this series of events depended a lot on where you stood politically.

Detroit’s Bankruptcy: Pensions and Public Employment After losing more than half its population over the last 60 years, the city of Detroit filed for bankruptcy on Thursday. While many factors contributed to its multi-decade decline, the biggest holes in the city’s budget appear to be due to underfunded pensions and health care for its employees and retirees. The city is now in the position of having to decide the degree to which it must stiff its creditors and retirees. The progressive “Blue model” of city governance promises a cohesive city government that offers good-paying jobs and lots of urban planning and social services, and the Motor City was no exception. But with the economic downturn, many of the bluest cities and states have shown the most red ink on their balance sheets. At the Spectator, Eileen Norcross details how public pension systems typically use nonsensical assumptions and accounting tricks to make them appear better-funded than they really are, leaving huge gaps that must be paid for by taxpayers.

How Outsourcing Jobs Affects the US Economy Definition: Job outsourcing is when U.S. companies hire foreign workers instead of Americans. In 2013, U.S. overseas affiliates employed 14 million workers. The four industries most affected are technology, call centers, human resources and manufacturing. The Rise and Fall of Detroit’s Middle Class In 1973, Ron and Loretta Martin and their three sons moved into the yellow-brick Colonial across the street from my childhood home, on Detroit’s west side. My father greeted them warmly, despite the fact that most of our neighbors saw them as blockbusters, part of a nefarious conspiracy by civil-rights groups to force integration and break up tight-knit white enclaves. The Martins were one of the first black families on our block. It took a lot of courage to be pioneers, those black families who crossed the city’s racial frontier. And it also took extra money. Black pioneers, as I discovered years later when I wrote a book about Detroit, were usually better off financially than the white people they moved next to.

Detroit files for bankruptcy - Jul. 18, 2013 The bankruptcy was filed by Emergency Manager Kevyn Orr and approved by Michigan Gov. Rick Snyder. Snyder said the financial condition of the city left him no choice. State set to takeover Detroit city government - Mar. 1, 2013 The takeover is short of a formal bankruptcy, but it will include appointing an emergency manager who would have many of the same powers as a bankruptcy judge. It could mean throwing out contracts with public employee unions and vendors that the city can't afford, and could lead to further cutbacks in already depleted city services. Detroit has 10 days to appeal Snyder's decision that there is a financial emergency in the city. Snyder said he has a "top candidate" for the manager post, but that he won't announce it until after the appeals period has passed. Snyder, a Republican, insisted the emergency manager is the best way to deal with the problems facing the city's operations. "The current system has not been working.