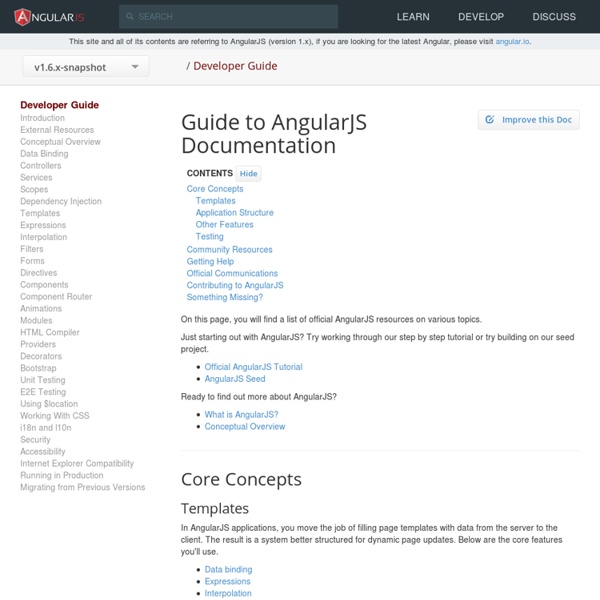 Loading... On this page, you will find a list of official AngularJS resources on various topics. Just starting out with AngularJS? Try working through our step by step tutorial or try building on our seed project. Ready to find out more about AngularJS? Core Concepts Templates In AngularJS applications, you move the job of filling page templates with data from the server to the client. Application Structure Other Features Testing Community Resources We have set up a guide to many resources provided by the community, where you can find lots of additional information and material on these topics, a list of complimentary libraries, and much more. External AngularJS resources Getting Help The recipe for getting help on your unique issue is to create an example that could work (even if it doesn't) in a shareable example on Plunker, JSFiddle, or similar site and then post to one of the following: Official Communications Official announcements, news and releases are posted to our blog, G+ and Twitter:

The 3 Best Resources and Tutorials to Learn AngularJS DebugMe Blog AngularJS is a great JavaScript framework which is still widely used to easily create all sorts of web applications. You are also able to build detailed and complex client-side apps with it too. Or as they are saying it about themselves “AngularJS is what HTML would have been, had it been designed for building web-apps.” From this short top list of three items you’ll get the big picture about Angular and will be able to start your journey of mastering the framework. It’s worth to learn it, even with Angular2.

Angular Conceptual Overview Loading... This section briefly touches on all of the important parts of AngularJS using a simple example. For a more in-depth explanation, see the tutorial. AngularJS Tutorial for Beginners With NodeJS ExpressJS and MongoDB (Part I) - Adrian Mejia’s Blog This tutorial is meant to be as clear as possible while at the same time teach you how to connect AngularJS with back-end servers in Node.Js, Express.js and databases such as MongoDB, also known as the MEAN stack. Let’s start with angularJS! We are going to start building all the examples in a single HTML file, which has embedded javascript and NO styles/CSS for simplicity. In the next tutorials we will learn how to use angularJS modules to break down the code, add testing to it and styles.

Quickstart: Angular2 with TypeScript and Gulp Angular2 is around the corner. The new version of the framework is much simpler to learn thanks to easier and more concise concepts like component-based architecture, new dependency injection or built-in modularity. In this step-by-step tutorial you will learn how how to get started with Angular2 with TypeScript and Gulp. Source code available on Github. Introduction

Using ES2015 with Angular today by thoughtram Need a private training? Get customized training for your corporation Request quote → One of the most exciting upcoming changes for Angular 2.0 is that it’s entirely written in ES2015 - the next version of JavaScript. There’s no need to wait until Angular 2.0 though. $rootScope.Scope Processes all of the watchers of the current scope and its children. Because a watcher's listener can change the model, the $digest() keeps calling the watchers until no more listeners are firing. This means that it is possible to get into an infinite loop. Documentation: MySQL Reference Manuals MySQL Documentation MySQL 5.7Reference Manual MySQL 5.7Release Notes Browse MySQL Documentation by: Product Topic

Writing AngularJS Apps Using ES6 As many of you are aware, ECMAScript 6 is in its draft state now and is expected to be finalized some time this year. But it has already caught a lot of attention in the community and browsers have already started implementing it. We also have a number of transpilers like Traceur, 6to5, and many others that convert ES6 code to ES5 compatible code. Community members have started playing around with ES6 and many of them are blogging about what they learn.

JS keyCodes When a KeyboardEvent fires, you can test which key was pressed because that event contains information you can write logic against. document.addEventListener("keydown", function(event) { console.log(event.which); } For example, by pressing "a", you'll get 65. How to Correctly Use BootstrapJS and AngularJS Together Free Course Getting Started with Angular 2 Angular 2 is the shiny new framework that comes with a lot of new concepts. Learn all the great new features. Bootstrap and Angular are tools that a great number of people use. Often times, they are used together in projects.