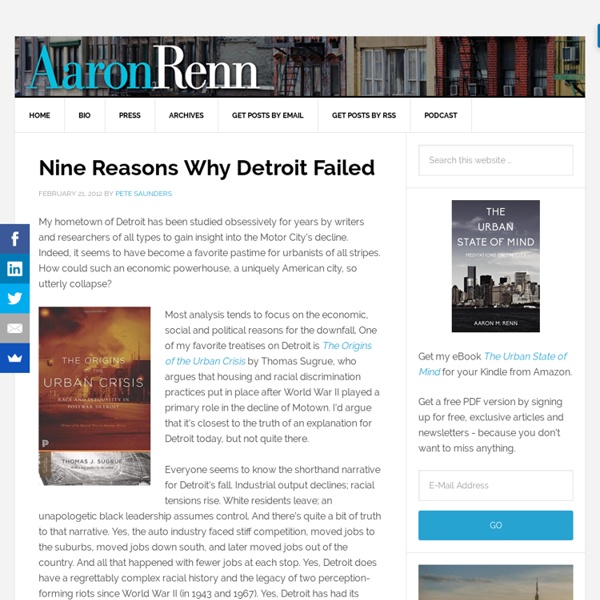 My hometown of Detroit has been studied obsessively for years by writers and researchers of all types to gain insight into the Motor City’s decline. Indeed, it seems to have become a favorite pastime for urbanists of all stripes. How could such an economic powerhouse, a uniquely American city, so utterly collapse? Most analysis tends to focus on the economic, social and political reasons for the downfall. One of my favorite treatises on Detroit is The Origins of the Urban Crisis by Thomas Sugrue, who argues that housing and racial discrimination practices put in place after World War II played a primary role in the decline of Motown. I’d argue that it’s closest to the truth of an explanation for Detroit today, but not quite there. Everyone seems to know the shorthand narrative for Detroit’s fall. But here’s the thing. So why has Detroit suffered unlike any other major city? If ever a city stood as a symbol of the dynamic U.S. economy, it was Detroit. Emphasis added. 1. 2. 3. 4. 5. 6. 7. Related:  cledezma294

Pension Bribery Scandal Leads to More Indictments in Detroit, Including Funds’ Former General Counsel May 2013 The longtime general counsel and a former trustee of Detroit's pension funds are the latest two city officials to be indicted in a bribery and kickback conspiracy that has been under investigation for several years and cost the pension funds $84 million in losses. Ronald Zajac, who served as General Counsel of Detroit's General Retirement System and Police and Fire Retirement System for more than 30 years, allegedly forced people seeking business with the pension funds to spend thousands of dollars on entertainment and other gifts for certain pension trustees involved in the scheme. Zajac also allegedly organized “birthday parties” for certain pension trustees, at which people with pension fund business would give cash gifts to the trustees. In return for directing cash, lavish vacations and other items of value to the pension trustees involved in the bribery and kickback conspiracy, the trustees voted to raise Zajac's salary by a substantial amount.

How did Detroit fall into the abyss? FILE: July 27, 2011 A section of vacant stores in Detroit.AP The bankruptcy filing for Detroit marks a final step in the chrome-plated city’s decades-long decline – which started with the country’s overall manufacturing slowdown and continued with the departure of U.S. automakers and residents, leaving behind a sprawling city trying to survive on dwindling coffers. Detroit was in the 1950s a worldwide hub of auto manufacturing, making it the fourth-largest U.S. city with one of the country’s highest per-capita incomes. However, the so-called Motor City’s decline started soon after with residents -- following their counterparts in other U.S. cities – starting to move to the suburbs and take with them businesses, jobs and tax dollars. Historians argue the deadly 1967 riot in Detroit, one of the many so-called “race riots” across the country in the 1960s, accelerated the trend. Orr, appointed in March by Gov. The Associated Press contributed to this report.

How the Democrats Destroyed Detroit Detroit, now synonymous with failure and decline, was once the emblem of American progress and prosperity. As the late biographer and scholar Matthew Josephson observed in the 1920s: “Nowhere in the world may the trend of the new industrial cycle be perceived more clearly than in Detroit. In this sense it is the most modern city in the world, the city of tomorrow.” University of Michigan historian Jeffrey Mirel puts it this way: “Throughout the 1920s, Detroit was the shining star of the new era, the very center of the American economic universe, where capitalism and technology combined to produce the greatest goods for the greatest numbers.” To most Americans, Detroit is best known as the home of the “Big Three” auto makers—General Motors, Ford, and Chrysler—who made the U.S. and the rest of the world mobile. In World War II, Detroit was the arsenal of democracy, producing tanks, jeeps and a host of other weapons that helped win the war. 1) Taxes (2) Harassing Businesses

Anatomy of Detroit’s Decline - Interactive Feature Mayor Coleman A. Young of Detroit at an event in 1980. Richard Sheinwald/Associated Press The financial crisis facing Detroit was decades in the making, caused in part by a trail of missteps, suspected corruption and inaction. Charles E. Edward Jeffries, who served as mayor from 1940 to 1948, developed the Detroit Plan, which involved razing 100 blighted acres and preparing the land for redevelopment. Albert Cobo was considered a candidate of the wealthy and of the white during his tenure from 1950 to 1957. Coleman A. Kwame M. Dave Bing, a former professional basketball star, took office in 2009 pledging to solve Detroit’s fiscal problems, which by then were already overwhelming. Related These Photos Will Make You Understand Detroit's Education Crisis

Amid Scandal and a Potential Break with the EAA, DPS has a Lesson to Learn | Green And Write - Education Policy Research Insights By Kacy Martin More Mess in DPS: Principal Kickbacks The federal government uncovered an alleged $1 million kickback scheme that involved 12 Detroit Public School (DPS) principals, a district administrator, and a vendor on Tuesday. For the past 13 years, businessman Norman Shy has reportedly been paying bribes to principals and skimming money off the top of exchanges involving school supplies. Shy apparently made a habit of submitting falsified invoices and delivering only a portion of what was ordered while keeping the remaining revenue for himself and the co-conspiring principals. Photo courtesy of Wikipedia Commons This is bad timing for scandal of this magnitude as DPS’s future is already in flux. Learning from the Mistakes of the EAA Sarah Reckhow, professor of political science at Michigan State University, wrote an op-ed last week that outlined the lessons that can be learned from Detroit’s failed experiment with alternate governance structures and political arrangements.

Detroit Decline Causes Include Auto Industry Collapse, Segregation And Politics -- Blue-collar workers poured into the cavernous auto plants of Detroit for generations, confident that a sturdy back and strong work ethic would bring them a house, a car and economic security. It was a place where the American dream came true. It came true in cities across the industrial heartland, from Chicago's meatpacking plants to the fire-belching steel mills of Cleveland and Pittsburgh. The good times would not last forever. The "Arsenal of Democracy" that supplied the Allied victory of World War II and evolved into the "Motor City" fell into a six-decade downward spiral of job losses, shrinking population and a plummeting tax base. "Detroit is an extreme case of problems that have afflicted every major old industrial city in the U.S.," said Thomas Sugrue, author of "The Origins of the Urban Crisis: Race and Inequality in Postwar Detroit" and a history professor at the University of Pennsylvania. All of the nation's industrial cities fell, but only Detroit hit bottom.

Housing crisis deepens in Detroit Ten years since the Mack Avenue fire By Debra Watson and with photographs by Mary Moore 21 June 2003 It has been a decade since Leroy Lyons and Shereese Williams lost their seven children in a tragic house fire on Detroit’s East Side. On a February afternoon in 1993, a raging inferno devoured the 130-year-old wooden frame home where the family lived. The parents were out of the house at the time the blaze broke out. When they returned to find their home in flames and their children dead, the police treated them not as bereaved parents but as criminals. The Committee for a Citizens Inquiry was formed by the Workers League (forerunner of the Socialist Equality Party) to expose the attempt of big business and the political elite to cover up their own responsibility for the accumulated social distress that lay behind the tragic deaths. After an exhaustive investigation, the Citizens Inquiry concluded that the fire itself was not an isolated case. Utility shutoffs continue

Detroit: Disappearing City? | Solidarity FORTY PERCENT OF Detroit today is considered virtually “unoccupied.” The administration of Mayor Dave Bing is trying to figure out how to move the remaining residents of these areas out, in the name of “rightsizing” the city. Of course he hasn’t revealed any specifics — and the devil is in the details! Residents are wary: without the money to relocate people and the services needed, it’s just another round of displacing the urban poor. Detroit is often compared to New Orleans after Katrina or Haiti, although Chris Hedges’ description of Camden, New Jersey as a “City of Ruins” also comes to mind, “the poster child of post-industrial decay (and) a warning of what huge pockets of the United State could turn into” (The Nation, November 22, 2010, While it’s not true that auto manufacturing has left the city, it has certainly downsized. Reuther’s Fatal Choice As the city’s oldest plants closed, production moved outward. The Role of the Police