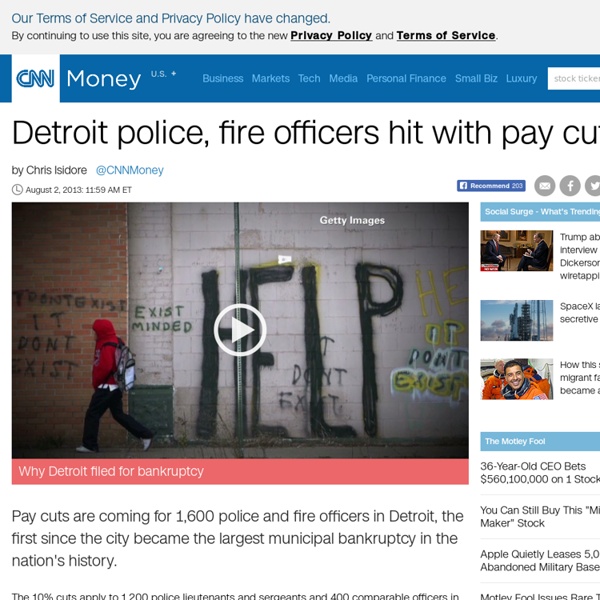 The 10% cuts apply to 1,200 police lieutenants and sergeants and 400 comparable officers in the fire department. The cuts, announced this week, will take effect in September. Bill Nowling, spokesman for Kevyn Orr, the emergency manager overseeing the city's reorganization effort, said other city employees took the same 10% cut in 2012. The cuts for these officers was delayed because of union contracts that were in effect. "We had to make this cut due to disparity between management and rank and file," said Nowling. He said the city will save $4.5 million from these latest cuts. "These pay cuts and the savings have already been baked into the budget. Related: New hockey arena still a go in Detroit Nowling said if the city is able to get the debt relief it is seeking in bankruptcy, it is possible that some of the pay cuts can be restored at the end of the year. "It's not a promise, but it's one of the things we're looking at doing," he said.

Is Detroit getting better? Some key findings Detroit Rising: One year after exiting bankruptcy, are city services in Detroit improving? How is Detroit doing one year after leaving bankruptcy? Any realistic estimation of the city's progress has to take more than finances into account. As Detroit approaches the anniversary of its exit from emergency control and bankruptcy, we look at a range of city services to see whether daily life has actually changed for the majority of Detroit's residents. Streetlights Entity: Public Lighting Authority of Detroit

Detroit plans to sell off closed fire stations By Bryan Dyne 5 June 2013 Eight vacant buildings once operated by the Detroit Fire Department─seven fire stations and the former firehouse headquarters─are being sold by the city of Detroit to private investors and developers to be transformed into restaurants, wineries or micro-distilleries in an effort to raise money for the city. The minimum bid for the fire stations are $637,000 while the former headquarters is being sold for $1.25 million. It is not yet clear who has bought the fire stations or for what price, though it is known that Southfield, Michigan developer Walter Cohen has plans to purchase the former headquarters and turn it into a boutique hotel. He plans to have eighty upscale rooms and a Cajun restaurant on the first floor.

Detroit Looks to Health Law to Ease Costs The Chicago plan, announced in May, would phase some of the city’s 11,800 retirees and their family members not eligible for Medicare out of city coverage by 2017. While some may seek insurance through new employers or through their spouses’ workplaces, others will probably be shifted to the insurance exchanges. Much of the plan for the next few years is in flux, but the changes are expected to contribute to a larger effort to save Chicago $155 million to $175 million a year in retiree health care costs by 2017. “With the implementation of the Affordable Care Act, our retirees will have more options to meet their health care needs,” said Sarah Hamilton, a spokeswoman for Mayor Rahm Emanuel, adding that most of the city’s retirees over 65 were already covered by Medicare.

After bankruptcy, few options for Detroit to grow revenue Slash costs, fix the balance sheet and take money that was once tied to debts and spend it on police, fire and other city services. That's the premise of Detroit's bankruptcy: short-term pain for long-term benefit, and cuts for Detroit's creditors, but better outcomes for residents. But of the $1.7 billion that Detroit's post-bankruptcy plan is expected to generate, only about $900 million comes from restructuring the city's debts. About $483 million comes from projected new revenues, $358 million from cost savings. "We don't have $1.7 billion in the bank," said former Detroit emergency manager Kevyn Orr, who led the city through bankruptcy. "We think we've made our estimates reasonable."

Fewest cops are patrolling Detroit streets since 1920s Detroit — There are fewer police officers patrolling the city than at any time since the 1920s, a manpower shortage that sometimes leaves precincts with only one squad car, posing what some say is a danger to cops and residents. Detroit has lost nearly half its patrol officers since 2000; ranks have shrunk by 37 percent in the past three years, as officers retired or bolted for other police departments amid the city's bankruptcy and cuts to pay and benefits. Left behind are 1,590 officers — the lowest since Detroit beefed up its police force to battle Prohibition bootleggers.

Detroit firefighters protesting bankruptcy discuss expanding fight against pension and budget cuts By our reporters 25 July 2013 Scores of firefighters demonstrated in front of the federal courthouse in downtown Detroit yesterday to voice their anger over last week’s bankruptcy filing by the city’s emergency manager, which threatens to cut up to 90 percent from the pensions owed to city workers and retirees. With the trade unions offering no way forward, fire fighters have formed an ad hoc organization called the Public Safety Workers Action Group (PSWAG), to reach out more broadly to working people around the city and explain the connection between budget cutting and the undermining of safety for the city’s residents. PSWAG members have been holding a number of small demonstrations at fire stations across Detroit in recent days. The American Federation of State, County and Municipal Employees (AFSCME) and other public sector unions, including the Detroit Fire Fighters Association, have opposed any genuine mobilization of city workers against the emergency manager and the bankruptcy.

Guardians of a broken city: Detroit's police struggle to make ends meet with pay cuts, dwindling numbers and rundown equipment in a town where even criminals pity cops By Associated Press Reporter Published: 20:57 GMT, 22 February 2014 | Updated: 23:48 GMT, 22 February 2014 It has come to this: Even some criminals sympathize with Detroit's cops. Baron Coleman thought he'd heard it all in his 17 years patrolling the streets. But then came the city's bankruptcy, a 10 per cent cut in police salaries, followed by support from a most unlikely corner - the bad guys. ‘When they saw us take a pay cut they were in shock.

Detroit plan calls for investing millions in fire department, EMS By Gina Damron and Elisha Anderson The Detroit Free Press DETROIT — Millions of dollars would be reinvested into Detroit’s public safety departments under a proposed adjustment plan for the beleaguered city. A disclosure statement filed today in U.S. Bankruptcy Court, along with the city’s plan of adjustment, proposes reinvesting millions to improve operating performance and infrastructure in the police and fire departments. 'A Crime': Groups Say Detroit Bankruptcy Plan Benefits Rich, Attacks Working People A group of Detroit residents is condemning the city's newly-approved restructuring plan to exit bankruptcy as a deal that will further benefit the wealthy and corporate class while hurting working people. As Democracy Now! reported Monday:

Detroit firefighters speak out on bankruptcy By Tim Rivers and Jerry White 29 July 2013 In fire stations across the city of Detroit, discussions are being held about the impact of the city’s bankruptcy filing and initial efforts by rank-and-file firefighters to mobilize opposition to the emergency manager’s attack on pensions and essential services. Last week, scores of red T-shirted firefighters, organized in the ad hoc Public Safety Workers Action Group (PSWAG), fanned out across the city holding informational pickets and protests outside of fire stations and the Federal Bankruptcy Court. They have explained the connection between decades of layoffs, fire station closings and other budget reductions, and the increased dangers facing residents in the sprawling city of 139 square miles.

A City’s Wrenching Budget Choices The growth helped pay for glittering capital projects all over town — a convention center on the Cape Fear River, a police headquarters with its own crime lab, a 20-mile bike and jogging trail, tennis courts and softball fields, a host of road and streetscape improvements. The mayor’s calendar was crowded with ribbon-cuttings. But by the time Mr. Saffo and the Council took on this year’s $85 million budget, the collapse of the real estate market had so choked revenues that the finance department could no longer afford free coffee for its staff.

Detroit pays high price for arson onslaught Detroit — Arson is a raging epidemic in Detroit, destroying neighborhoods and lives as the city tries to emerge from bankruptcy. Even amid a historic demolition blitz, buildings burn faster than Detroit can raze them. Last year, the city had 3,839 suspicious fires and demolished 3,500 buildings, according to city records analyzed by The Detroit News. A city in flames: inside Detroit's war on arson For eight long years, the firefighters of Highland Park, Michigan, worked out of a warehouse. There was no red-bricked facade, no lanky Dalmatian. No freshly washed engines gleaming in the sun. No second-floor fire pole to descend in the dead of night to wailing sirens. Whatever idealized vision you have of firefighting, Highland Park is not it. Instead, picture a hulking, boxy building on the edge of an industrial park about six miles north of downtown Detroit.