Relax. let the music engulf you. 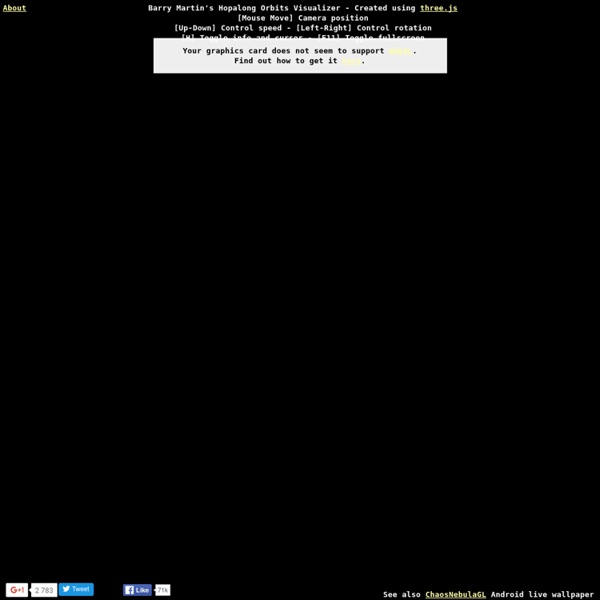 THEREMIN - A Touch Friendly Synthesizer ✖Update: 7 February 2014 Thanks to everyone for sharing! Over 100,000 people have played on the theremin in the last 3 days which is absolutely amazing. Due to a large number of requests, we've began working on a record function as well as an offline version of the app which will be available soon. Tomorrow is Friday the 13th and a full moon. That won't happen again until 2049 We're not superstitious. But if you are, you might want to know that a full moon is falling on Friday the 13th this week. Specifically, the full moon occurs at precisely 12:11 am EDT on Thursday night — i.e., early Friday morning. That means the 13th will coincide with the full moon for residents of the Eastern time zone (as well as South America, Europe, Africa, and Asia), but not the Central, Mountain, or Pacific time zones. The next time this happens will be august 13, 2049

11 Web Toys and Generators to Waste Your Time A couple of months ago, I listed 17 Web Toys for Your Procrastination Pleasure. Now that final exams are over, maybe you'll now have time to play with them -plus eleven more here. Some are fairly new, some are classics, and this list is heavy on music. Have fun! 1.

Give Your Photos a Retro Comic Book Effect This tutorial will show you how to give a comic book look to your photos using a couple of filters and some additional decorations. Click on the image below to see a larger and more clear image of the final results. Old halftone print effect Download and open this photo in Photoshop. Now we are going to increase the overall contrast of the picture by burning it a bit. WebGL Water Loading... Made by Evan Wallace This demo requires a decent graphics card and up-to-date drivers. If you can't run the demo, you can still see it on YouTube.

// Animated Gifs 01 - Matthew DiVito // MOTION // GRAPHIC // DESIGN // Animated Gifs 01 What started as a little experiment has grown into something more. Selections from my blog mrdiv.tumblr.com ChronoAtlas - The Interactive Historical Atlas of the World The Second Punic WarContributed by caadmin Carthage had suffered immensely from the First Punic War, not only had she lost Sicily, but she also lost her naval superiority over Rome. Furthermore the war indemnity Rome forced upon Carthage bankrupted her. A few years after the First Punic War, whilst Carthage was occupied quelling a revolt ignited by unpaid mercenaries, Rome seized the Carthaginian islands of Sardinia and Corsica.

Get Started The process is very straight forward. Follow the step by step instructions below. If you have any further questions you can always email us at information@fix-your-pix.co.uk. Step 1: Place your Order Fill out our online order form or simply email or phone your instructions to us.