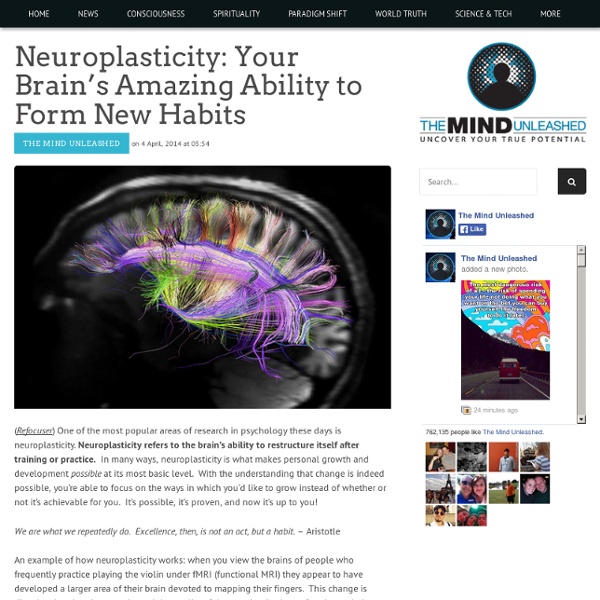 Avoid Harmful Chemical Teeth Whitening With These DIY Tricks To A Brighter Smile Teeth naturally yellow as we age. A number of things we eat and drink can contribute to the loss of a pearly white smile. Drinking a lot of coffee, red wine, and smoking can cause yellowing. Soda, tea and berries contain chromogenic agents which stain teeth. Even some types of medication taken as an adult can cause yellowing. Everyone wants a great smile, but the cost and harmful toxins associated with whitening treatments can make you think twice. 1. 2. 3. 4. Avoiding the expense of costly whitening procedures is just one plus to trying at-home whitening tricks. Image courtesy

Stem cell therapy regenerates heart muscle damaged from heart attacks in primates Heart cells created from human embryonic stem cells successfully restored damaged heart muscles in monkeys. The results of the experiment appear in the April 30 advanced online edition of the journal Nature in a paper titled, "Human embryonic-stem cell derived cardiomyocytes regenerate non-human primate hearts." The findings suggest that the approach should be feasible in humans, the researchers said. "Before this study, it was not known if it is possible to produce sufficient numbers of these cells and successfully use them to remuscularize damaged hearts in a large animal whose heart size and physiology is similar to that of the human heart," said Dr. Charles Murry, UW professor of pathology and bioengineering, who led the research team that conducted the experiment. A physician/scientist, Murry directs the UW Center for Cardiovascular Biology and is a UW Medicine pathologist. Murry said he expected the approach could be ready for clinical trials in humans within four years.

Disconnecting from the Matrix and Reconnecting with Consciousness We do not need solutions to the ills of the world. We need to remove the cause of the problem and that is ignorance and arrogance. These are inseparable partners in the war on human awareness and innate intelligence. The stupidity of ignorance can only survive through the blindness of arrogance. They need each other for their mutual prosperity. Einstein said: “The one who follows the crowd will usually get no further than the crowd. Da Vinci said: ‘The greatest deception men suffer is from their own opinions.’ Currently, the vast majority of people are the victims of their own myopia and cannot see beyond their race, culture, religion, job, political preference, sexuality and societal programming. This is Da Vinci’s point that humanity must learn to see and realize that everything connects to everything else. Education, science, medicine, politics and media are all founded on a belief in the known. These are some definitions of ‘normal’: ‘You don’t get it. About the Author References:

Engineers grow functional human cartilage in lab Researchers at Columbia Engineering announced today that they have successfully grown fully functional human cartilage in vitro from human stem cells derived from bone marrow tissue. Their study, which demonstrates new ways to better mimic the enormous complexity of tissue development, regeneration, and disease, is published in the April 28 Early Online edition of Proceedings of the National Academy of Sciences (PNAS). "We've been able -- for the first time -- to generate fully functional human cartilage from mesenchymal stem cells by mimicking in vitro the developmental process of mesenchymal condensation," says Gordana Vunjak-Novakovic, who led the study and is the Mikati Foundation Professor of Biomedical Engineering at Columbia Engineering and professor of medical sciences. For more than 20 years, researchers have unofficially called cartilage the "official tissue of tissue engineering," Vunjak-Novakovic observes.

A Tree That Eats Metal Was Just Discovered In The Philippines | Plants have evolved to exclude any metal from their roots or in any of the surrounding soil. Most plants do this, but not a particular plant called the Rinorea Niccolifera. It was discovered in the jungles of the Philippines and can accumulate up to 18,000 ppm of metal in its leaves and roots without being poisoned. This is 100 to 1000 times the amount of metal that normal plants can take in. Researchers at the University of the Phillippines – Los Banos that described the species in a new report also discovered that its ability to eat toxic levels of metals could make the tree a great solution to toxic waste sites around the planet. This is why this discovery is so important. It is a small tree, normally 1.8 meters tall with a stem ranging from 3 to 13 centimetres in diameter. You can access the full study HERE. “Hyper-accumulator plants have great potentials for the development of green technologies, for example, phytoremediation and phytomining,” - Dr. Final Thoughts Sources:

Soon Censored? Korean Scientists Successfully Kill Cancer with Magnets In South Korea, scientists used a magnetic field to get cancer cells to actually self-destruct. The body removes old, defective, and infected cells through the process of programmed cell death (PCD), or apoptosis. In apoptosis, the rejected cell responds to certain signals sent by the body by fragmenting. Immune cells then consume these fragments. The magnets help trigger apoptosis. When apoptosis fails, however, rejected cells divide uncontrollably, developing tumors. Magnets Induce Apoptosis Professor Jinwoo Cheon of Yonsei University in Seoul and a team of scientists conducted experiments on bowel cancer cells using magnetic fields to induce apoptosis. Big Pharma’s Response? In a related experiment, the scientists performed the same therapy on zebra fish, which caused them to grow unusual tails. “We have demonstrated that apoptosis signaling can be turned on in-vitro (in the laboratory) and in a zebra fish in-vivo (living) model by using a magnetic switch,” say the scientists. Huffpost

Learn Your Mayan Sign | Free Mayan Astrology Horoscope at MyMayanSign.com Today is your spiritual birthday. The energy of the day you are born is fully active. Today you are in the day of Seed and 12, and also week of the Reed. This is a very special day that comes around every 260 days. Therefore, today, life seems very meaningful to you. Have you ever wondered? What you are living today tells you about your life purpose and why you were born into your sign Seed. The universe can give you a message in any way today and when it does, it is a good idea to take some time to reflect on it by meditating, taking a walk, going in to nature etc... The least you can do is spend a few minutes to reflect on what message you have received today before going to sleep. Today is the day to correct your course of your life. An ideal way to start your day is to listen to your intuition and create new beginnings.

Mother's diet affects the 'silencing' of her child's genes A mother's diet before conception can permanently affect how her child's genes function, according to a study published in Nature Communications. The first such evidence of the effect in humans opens up the possibility that a mother's diet before pregnancy could permanently affect many aspects of her children's lifelong health. Researchers from the MRC International Nutrition Group, based at the London School of Hygiene & Tropical Medicine and MRC Unit, The Gambia, utilised a unique 'experiment of nature' in rural Gambia, where the population's dependence on own grown foods and a markedly seasonal climate impose a large difference in people's dietary patterns between rainy and dry seasons. Through a selection process involving over 2,000 women, the researchers enrolled pregnant women who conceived at the peak of the rainy season (84 women) and the peak of the dry season (83 women). Explore further: Dieting for obese mothers just before pregnancy may not be enough

30 Magical Photos Of Children Playing Around The World No matter their cultural background, no matter their economic situation, kids will always find imaginative ways to have fun. Their wild imaginations and magical childhood moments, when captured on camera by talented photographers, can make for truly wonderful photos. These 33 images we collected will prove that childhood can be wonderful no matter where you go. Show Full Text Many in the Western world fear that technology is making today’s children lose touch with nature and with their own creativity, and while there are arguments to be made for the intellectual stimulation that apps and programs for children can bring, there’s also something to be said for simply playing with a stick in the mud or chasing dandelion seeds though an open meadow. For better or worse, the children in these photos seem entirely content making their own fun. Indonesia Thanks for sharing! 3x per week 30,000,000+ monthly readers Error sending email Image credits: Ipoenk Graphic Image credits: Agoes Antara Russia Peru

Study questions Neandertal inferiority to early modern humans If you think Neanderthals were stupid and primitive, it's time to think again. The widely held notion that Neanderthals were dimwitted and that their inferior intelligence allowed them to be driven to extinction by the much brighter ancestors of modern humans is not supported by scientific evidence, according to a researcher at the University of Colorado Boulder. Neanderthals thrived in a large swath of Europe and Asia between about 350,000 and 40,000 years ago. They disappeared after our ancestors, a group referred to as "anatomically modern humans," crossed into Europe from Africa. In the past, some researchers have tried to explain the demise of the Neanderthals by suggesting that the newcomers were superior to Neanderthals in key ways, including their ability to hunt, communicate, innovate and adapt to different environments. "The evidence for cognitive inferiority is simply not there," said Villa, a curator at the University of Colorado Museum of Natural History.